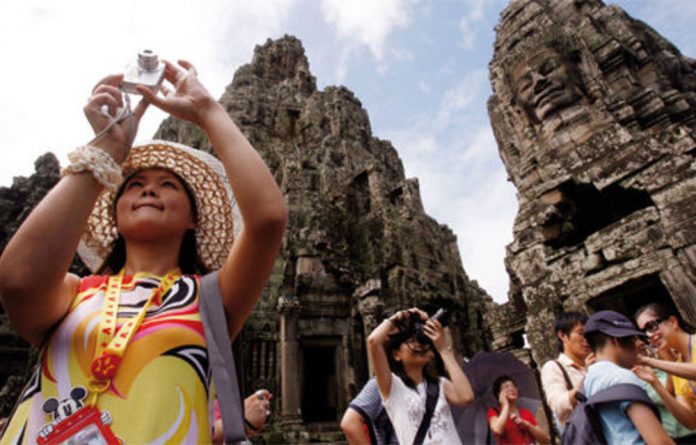 The five-star hotels around the ancient temples of Angkor are oases of green — sleek new buildings ringed by tropical forests and sprawling lawns.

But the water used to sustain them is being sucked from groundwater under the city, threatening the stability of the centuries old world heritage-listed landmark.

Unchecked development and the widespread, unregulated pumping of groundwater throughout Siem Reap city has raised concerns that the temples, including the world’s largest religious monument, Angkor Wat, could crack or crumble if too much water is drained away.

The temples and towers of the 402km² Angkor site sit on a base of sand, kept firm by a constant supply of groundwater that rises and falls with the seasons, but that is now being used to supply a burgeoning city.

With the number of visitors to the northern Cambodian province approaching two million a year, increasing pressure is being put on the scarce water resource.

Thousands of illegal private pumps have been sunk across the city, pulling millions of litres of water from the ground each day.

Unesco, the cultural arm of the United Nations, says that no one knows just how much water is being drawn from the ground, or how much can be taken safely.

“We know there are a lot of hotels pumping their own water, but we don’t know how much they are consuming,” said Philippe Delanghe, the head of Unesco’s cultural unit.

“If we discover there is an overuse of water, this can have an effect on the temples, because the temples are built on a mixture of sand and water, which keeps them stable.

“If you’re going to suck away the water, this might cause stability problems. It is only an ‘if’ now, but it is important we understand this issue.”

Water is already a precious commodity in Siem Reap, particularly during the dry season, when tourist numbers are highest.

Visitor numbers peaked at more than two million in 2007, before the global financial crisis weakened numbers. This year, with tourists returning, about 1,6-million people are expected.

At the same time the population in the city of Siem Reap, barely 5km from the most famous temple, Angkor Wat, has doubled in a little more than a decade to about 200 000.

The government-run Siem Reap water supply authority has the capacity to pump nine megalitres of water a day from underground, Som Kunthea, its director general, said.

But, he estimated, the city, even at its current size, is already using more than 50 megalitres daily.

Authorities believe there are more than 60 00 private pumps and 10 00 wells sunk across Siem Reap.

Single businesses, like the town’s ice factory, are drawing more than a megalitre from the ground every day.

Peou Hang, the deputy director of water management for the ­Cambodian government’s Angkor conservation body (Apsara), said the pumping was unregulated and almost impossible to police.

“We cannot [find out] — the exact quantity they extract every day. I ask them, but they do not want to answer our questions, so we have to make an estimation.”

He said Apsara was aware of the potential groundwater problem and was moving to ensure that the ­temples would be protected.

The Khmer temple is not one block so if you have movement underneath it, sometimes just centimetres, it can create a problem. But the problem is not yet happening.”

Its report, now in a draft stage and to be completed by the end of the year, is likely to recommend a number of measures, including regulating the pumping of groundwater as well as bringing water from other sources, including Tonle Sap lake.

“We don’t know how much, but it will be expensive to bring water from far away. Tonle Sap Lake is more than 20km [away]. It will cost a lot and make water more expensive,” Som said.

But new measures are needed. Som said the government’s water authority did not have the capacity to supply all of Siem Reap with drinking water.

“Right now, there is no sign of impact on the temples.

But if we don’t move now with any consideration for the future, if we keep letting people pump water and the population continues to increase, it will have an impact.” —