City of spit and polish 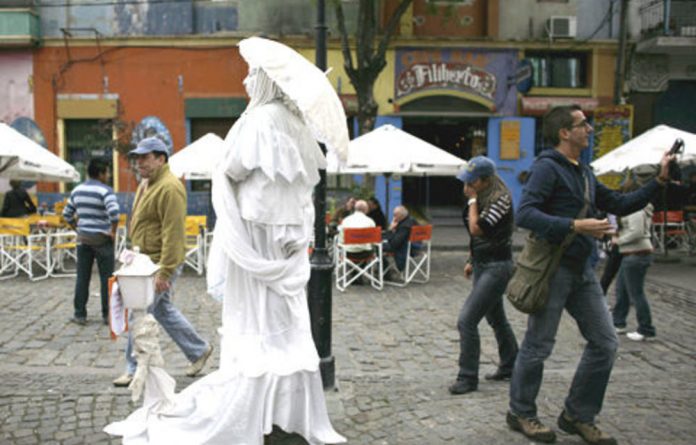 Buenos Aires, populated by descendants of Spanish and Italian immigrants, is a vast city of 18-million people.

It has the feel of a cosmopolitan hub of Europe, but there’s no escaping that it’s on the other side of the planet — at the far end of South America. It’s a place in which rich history and machismo blend to form a vibrant mix of culture and consumption.

It’s a fascinating place in which to find yourself and one of the best ways to see the city is on foot, even if you have only limited time to take it in. And a remarkably reliable and cheap public transport system (a one-way bus ticket costs R2,40 and a subway ticket R2,20) makes getting around fairly straightforward.

Argentinians don’t just walk, they strut — chest out, shoulders back, hips swaying. But they don’t pick up their dog shit on the pavements. They’re a proud people with a proud history and the number of grand monuments scattered around Buenos Aires offers a glimpse of it. But on the detailed façade of every enormous 19th-century building is nonsensical graffiti that nobody has tried to clean off.

A basic understanding of Spanish would certainly count in your favour but it isn’t necessary — most people are quite happy to engage in a “Spanglish” conversation and lend a hand. Portenos (“people from the port”), as people from Buenos Aires are derogatively referred to by the rest of Argentina, defy their big-city reputation with their eagerness to help — but they spit like footballers when they’re walking in the street.

Persevere, though, when in the city of tango, because there are some things you just have to do:
Rocking the suburbs
San Telmo is the oldest neighbourhood in the city and has magnificently preserved 19th-century buildings and cobbled streets. Every second shop sells antiques and oddities and for 12 hours on Sundays a 1km stretch of flea market springs up on Defensa Street. Its main attraction is at the Plaza Dorrego, where you can sit at cafés sipping your café con leche while watching tango dancers busk for a few pesos in their fedoras.

On the south side of the city is the barrio of La Boca, where Buenos Aires was founded in 15 36, its charismatic multicoloured houses providing many postcard-perfect photo opps. The continental feel of the place lends itself to romantic notions of the tango and its many pavement cafés let you sit back and take in its downbeat appeal. It’s home to the famous Boca Juniors football club and the stomping ground of the at-once loved and loathed icon of Argentine football, Diego Maradonna, who is immortalised in murals on walls throughout the area — the pinnacle of the rags-to-riches story.

La Boca is on the wrong side of the docks, so to speak, and tourists are warned to stick to the demarcated route and not to venture too far into the suburb — don’t let the pavement cafés and buskers fool you; this is still Latin America and petty crime is rife.

To the northeast, Palermo is to Buenos Aires what Sandton is to Jo’burg. It’s a trendy district with flashy restaurants, designer shopping and need-to-be-seen-at nightclubs that stay open until 7am — even on week nights.

Monumental matters
Political upheaval is par for the course in Argentina and monuments throughout the city offer both sightseeing and a history lesson. The Plaza de Mayo is a short walk down Defensa Street and commemorates Argentina’s independence from Spain in May 18 10. (The country may have been independent for 200 years but in many ways it still has the feel of an outpost of the colony.)

People here love a good protest and every Thursday — without fail — the mothers of people who went “missing” during the military dictatorship in the late 19 70s and early 19 80s descend on the Plaza to voice their resentment and demand answers.

The Obelisco de Buenos Aires is just a short walk from the Plaza de Mayo. The 67m-high column towers above Avenida 9 de Julio, the widest road in the world — 18 lanes of mayhem and fumes that puts the traffic in the Johannesburg CBD to shame — and was built in 19 36 to mark the 400th anniversary of the founding of the city. The road takes a good five minutes, as well as considerable chutzpah, to cross.

Downtown is Cementerio de la Recoleta, a little village of the dead, filled with Gothic-inspired mausoleums and complete with street names, which houses some of the country’s best-loved cadavers. Eva Peron (better known simply as Evita) is buried here, as are several former presidents and high-profile countrymen, many of whom flooded to the upmarket Recoleta area when yellow fever broke out in San Telmo in the 18 70s. The dead are grandiosely immortalised in this miniature ghost town, but many of the crypts have been vandalised and looted, making it all the more eerie.

Beefing up
By now you would have worked up an appetite, and, although the food is rather bland in general, Argentinians aren’t shy with their portions. Asado is the traditional dish — an animal carcass is splayed and roasted for hours alongside an open flame. Steaks in many restaurants come in 800g portions and stuffed cows often stand at the entrances of restaurants to remind patrons of exactly where their meal is coming from.

They typically go out for supper at about 10pm and the carnivorous abandon is seldom supplemented with chips, or fritas – mixing protein and carbs is apparently far too passé for the trendy Argentinians. Just be careful what you order — if you’re unfamiliar with the names of the cuts in Spanish, you might end up with a giant cut of gristle.

“The people are good here,” says South African ambassador to Argentina, Tony Leon, who has been living in Buenos Aires for a year now.

And indeed they are — they’re open and warm and seem genuinely ­interested in other cultures. But regardless of how swish they look in their designer gear, don’t get too close to them — you might just get spat on as they’re walking past.

Goodbye tickey bandits, hello tango touts
The tango is a romantic fixation in Buenos Aires and vendors along popular tourist routes are there in droves trying to flog their shows. Sabor a Tango (Flavour of Tango) is one such outfit that has a dinner-and-show option for R600 and just the show for R200.

Even though it might be analogous to a tourist in South Africa hankering after a Zulu reed dance, we decided to do the “we’re only in Buenos Aires once” thing and went to the show.

But it was up to the calibre of a cabaret at Carnival City. The athleticism of the dancers, particularly the women, is not to be sneered at, but at two hours long there’s not nearly enough of the spectacular to keep you engaged. It’s a parody of cookie-cut culture for the dollar trade.

Your best chance of enjoying a more authentic tango experience is either at the Plaza Dorrego (on Defensa Street in San Telmo) or in La Boca at a pavement café, where dancers will entertain you with their fancy footwork as you sip on your cortado and nibble on your empanadas.

In two recent documentaries, we finally get up close to the complicated sadness of Argentina’s original football deity
Read more
Politics

Old and young face off in DA battle

With an internal election weeks away, and increasing leaks and public fights, the party is trying to find a way forward
Read more
Sport

East Asia 1998, Greece 2008, Argentina 2018. The fund knows the suffering its loans cause, yet it has gone ahead in Ecuador
Read more
Advertising
Continue to the category
Africa