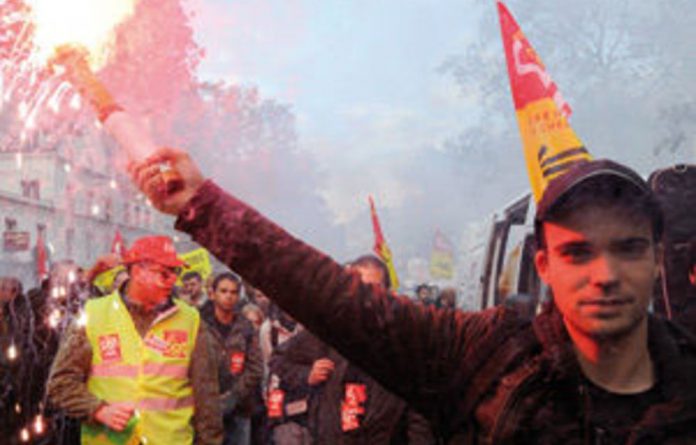 French police cleared access to the main refinery supplying fuel to Paris early on Friday as unions hardened their stance ahead of a final vote on President Nicolas Sarkozy’s pension reform expected later in the day.

Signalling their determination to keep fighting even after the reform has become law, the country’s six main unions have called for two more days of action over the next 10 days against the unpopular reform.

“The protests are not stopping, we just have different views on how to proceed,” Jean-Claude Mailly, head of the more radical Force Ouvriere union told RMC radio. “We still think that demonstrating is not enough … we have to ramp it up … we need a strong day of public and private sector strikes.”

The government resorted to a special measure to speed the reform bill’s passage through the Senate, with a vote now due on Friday evening as pressure builds on Sarkozy to end the long-running impasse with the unions ahead of half-term holidays beginning this weekend.

In addition to transport disruptions, the president is battling 11-day-old refinery strikes and fuel depot blockades that have forced the closure of one in five petrol stations across the country, Energy Minister Jean-Louis Borloo said.

Police ended a blockade at dawn of Total’s Grandpuits oil refinery, which supplies fuel for the Paris area. Reuters television footage showed scuffles breaking out between the police and strikers at the refinery southeast of the capital and one person was carried away on a stretcher.

“There is not much left in the pumps,” said local prefect Jean-Michel Drevet. “This will relieve some of that.”

With his popularity ratings near an all-time low 18 months from a general election, Sarkozy has vowed to pass a reform he says is the only way to limit a ballooning pensions shortfall and protect the coveted “AAA” credit rating that allows France to borrow at favourable interest rates.

“If the French are not careful, they will soon join the PIIGS [Portugal, Italy, Ireland, Greece, and Spain] as the troubled economies of Europe,” said professor Anthony Sabino, at St John’s University in New York.

Union wager
Sarkozy wants the Bill — which would raise the minimum age of retirement to 62 from 60 and the maximum age for a full pension to 67 from 65 — passed quickly in the hope that protests will ease once it has become law.

But even after Sarkozy sent in police to clear access to all of France’s fuel depots, striking workers seemed determined to maintain their grip on vital sectors of the economy with blockades.

If the reform become law, France would still have one of the lowest retirement ages in Europe. And the broader set of measures Sarkozy is pushing through to cut the deficit are far milder than those seen in other countries like Britain, which unveiled £80-billion in spending cuts earlier this week.

But a poll published for Canal Plus television on Friday showed 70% of French back the strikes.

Unions are betting that a show of force by students — thousands of whom protested on Thursday — and private sector workers could tip the scales and force the government back to back down, as it did 15 years ago in the face of massive demonstrations against pension reform.

Previous street protests have been largely peaceful, except for episodic flare-ups of violence in the wealthy city of Lyon and in Nanterre in the Paris suburbs, where youths clashed with police again on Thursday.

Unions said marches this week drew about 3,5-million people, but the government estimated the number of protesters at just over a million.

“What we’re doing has been done everywhere else in the world,” Labour Minister Eric Woerth told France 2 television. “The protests, worries, discontent has to stop when the law is passed.” – Reuters