US accused of failing to probe Iraqi abuse cases 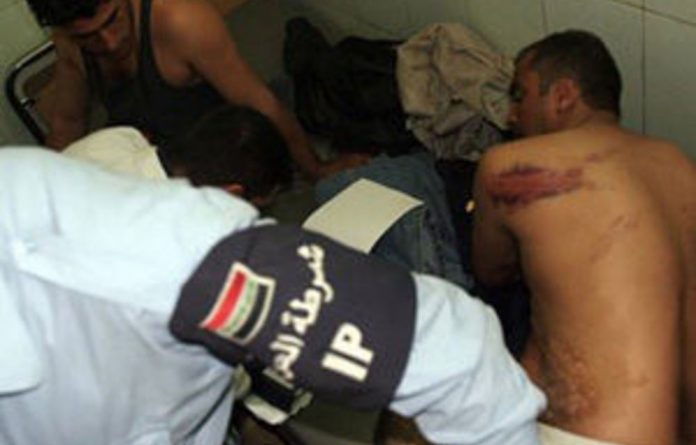 WikiLeaks released nearly 400 000 classified US files on the Iraq war on Friday, some detailing gruesome cases of prisoner abuse by Iraqi forces that the US military knew about but did not seem to investigate.

The Pentagon decried the website’s publication of the secret reports — the largest security breach of its kind in US military history, far surpassing the group’s dump of more than 70 000 Afghan war files in July.

US officials said the leak endangered US troops and threatened to put some 300 Iraqi collaborators at risk by exposing their identities.

WikiLeaks founder Julian Assange said the documents showed evidence of war crimes, but the Pentagon dismissed the files as “ground-level” field reports from a well-chronicled war with no real surprises.

“We deplore WikiLeaks for inducing individuals to break the law, leak classified documents and then cavalierly share that secret information with the world,” Geoff Morrell, Pentagon press secretary, said.

The Iraq war files touched on other themes, including well-known US concerns about Iranian training and support for Iraqi militias. The documents, which spanned 2003 to 2009, also detailed 66 081 civilian deaths in the Iraqi conflict, WikiLeaks said.

“There are reports of civilians being indiscriminately killed at checkpoints … of Iraqi detainees being tortured by coalition forces, and of US soldiers blowing up entire civilian buildings because of one suspected insurgent on the roof,” WikiLeaks said in a statement.

In one 2007 case, according to the documents, an Apache helicopter killed two Iraqis suspects who had made signs that they wanted to surrender. The document said, “They can not surrender to aircraft and are still valid targets.” It can be seen here: http://warlogs.wikileaks.org/id/E8DE9B9F-E468-B587-E4B332C09FF48BE2/

Although the Iraq conflict has faded from US public debate in recent years, the document dump threatens to revive memories of some of the most trying times in the war, including the Abu Ghraib prisoner abuse scandal.

Cracked ribs, executions
Those media organisations given advance access to the database — 10 weeks in one case — broadly concluded that the documents showed that US forces had effectively turned a blind eye to torture and abuse of prisoners by Iraqi forces.

In one case, an Iraqi policeman shot a detainee in the leg. The suspect was whipped with a rod and hose across his back, cracking ribs, causing multiple lacerations and welts.

“The outcome: ‘No further investigation,'” the Guardian wrote.

The documents also cited cases of rape and murder, including a videotaped execution of a detainee by Iraqi soldiers. That document can be seen here: http://www.guardian.co.uk/world/iraq/warlogs/BCD499A0-F0A3-2B1D- B27A2F1D750FE720

The New York Times said that “while some abuse cases were investigated by the Americans, most noted in the archive seemed to have been ignored”. It said soldiers had told their officers about the abuses and then asked Iraqis to investigate.

Amnesty International condemned the revelations in the documents and questioned whether US authorities had broken international law by handing over detainees to Iraqi forces known to be committing abuses “on a truly shocking scale”.

“These documents apparently provide further evidence that the US authorities have been aware of this systematic abuse for years,” said Malcolm Smart, Amnesty International’s director for the Middle East and North Africa.

The document release could also renew debate about foreign and domestic players influencing Iraq, which has been in a political vacuum since an inconclusive election in March.

The US envoy in Iraq said in August he believed groups backed by Iran were responsible for a quarter of US casualties in the Iraq war.

More than 4 400 US soldiers have been killed since the start of the 2003 US-led invasion. All US forces are set to withdraw from Iraq by the end of next year. – Reuters