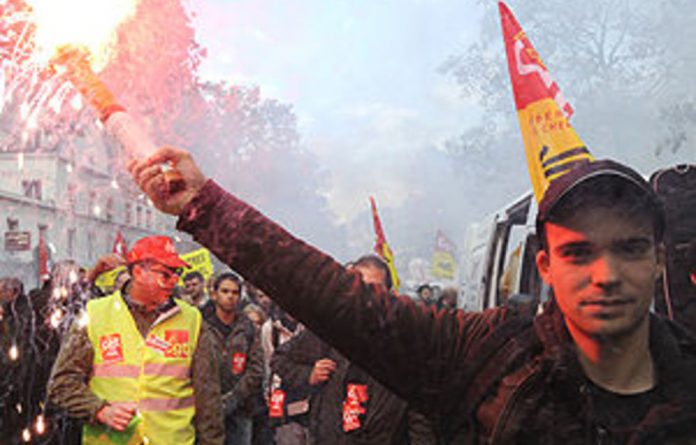 During a week of national demonstrations Sarkozy was forced to appeal for calm and “responsibility” after cars were burned, shop windows smashed and journalists assaulted in Nanterre, west of Paris, and in Lyon.

The president could do little to stop the oil refinery strike from biting hard. Jean-Louis Borloo, the ecology minister, said that just under 4000 petrol stations, of a total of 12 500, were “awaiting supplies”.

On the outskirts of Paris and in parts of the northwest long queues formed as motorists waited for deliveries.

“Without trucks it’s impossible to supply factories and shops and the economy becomes paralysed,” he said.
Of all the sectors disrupted by the unions’ strategy of “soft” rolling strikes, it is the fuel sector that has most rattled the government.

Despite repeatedly assuring France that chronic shortages are out of the question, ministers have now formed a crisis centre.

Speaking from an international summit in Deauville, northwest France, Sarkozy said an emergency meeting would be held to “unblock a certain number of situations”.

Shortages, he said, “cannot exist in a democracy. There are people who want to work, the immense majority, and they cannot be deprived of fuel.”

He said that he had no intention of going back on his pension reforms, which include raising the basic age of retirement from 60 to 62.

He faces arguably his toughest week in power as he waits for a vote in the Senate which, although the end of the reform’s passage into law, will close the main chapter of parliamentary debate.

But those marching in Paris refused to let the vote get them down.

For them, the reform is unjust, hitting hardest women, workers in hazardous jobs and those who start work at a young age.

“The vote is of no importance,” said Didier Caron, a 51-year-old Renault employee.

“If the street works well, it could still win.”

As students and children rubbed shoulders with pensioners and postmen, the demonstration drew 3,5-million people on to the streets, according to the unions, and 1,1-million, according to the interior ministry. —