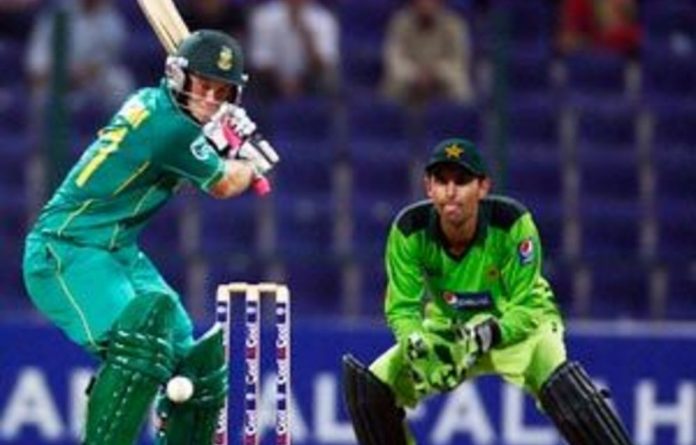 Tsotsobe, with a career-best 3-16, and skipper Botha (3-31) led a spirited South African bowling in restricting Pakistan to a paltry 119 at the Abu Dhabi Stadium in a match whose income will go to flood victims in Pakistan.

More than two million people were displaced in the worst-ever floods in Pakistan.

The two left-handers shared a solid 66-run partnership for the fourth wicket after paceman Shoaib Akhtar gave Pakistan some hope with the quick wickets of opener Loots Bosman and AB de Villiers in the third over.

Botha said he was happy to lead the series.

“It was a clinical performance and I am happy at the way the young guns stepped in after we lost three early wickets, especially Ingram and Duminy,” said Botha.

Duminy, who also took two beautiful catches, was named man of the match.

Disappointed
Earlier, Tsotsobe and off-spinner Botha bowled tightly to derail Pakistan, who won the toss and batted on a flat pitch.

Misbah-ul-Haq, recalled after being axed following the World Twenty20 in May this year, top scored with 27, with a six and two boundaries.

Skipper Shahid Afridi hit a rapid seven-ball 25 before he became one of Botha’s three victims.

Pakistan had raced to 16 in the second over before Tsotsobe removed openers Imran Farhat (10) and Shahzaib Hasan (nine) in the sixth.

Pakistan coach Waqar Younis was disappointed over the poor batting.

“We scored 25 to 30 runs less than we expected,” said Waqar, whose team lost the last six wickets for a mere 35 runs. “We need to bat with strategy in the next game.”

This is Pakistan’s home series, shifted to United Arab Emirates due to security fears.

The two teams meet in the second Twenty20 on Wednesday.

They then play the first two one-day internationals and the second Test in Abu Dhabi. Dubai will stage the last three one-dayers and the first Test. — AFP

Scientists in South Africa say there’s no evidence that the B.1.617 is worse than our local variant
Editorial

Our way of life is still far from finding its “new normal” and we aren’t getting any closer, while palace politics once again take centre stage as we head to October’s local elections
Business

After 18 months under administration, the loss-making airline has been cleared for takeoff
Advertising