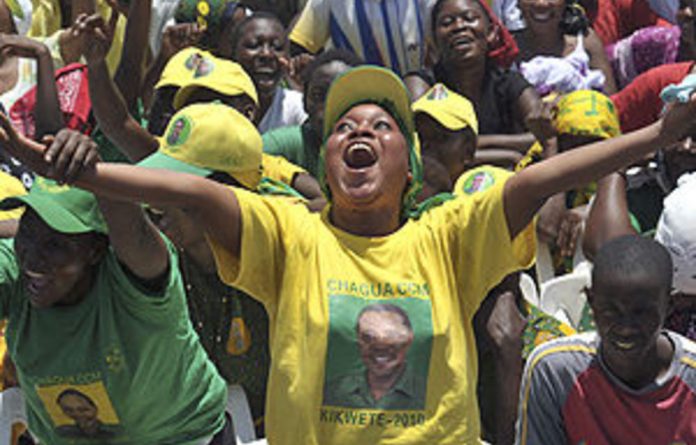 I won’t be able to make my cross, because there are no postal votes, but I don’t mind. I’m still undecided.

Tanzania’s three major parties, the ruling Chama Cha Mapinduzi (CCM); the strongest opposition grouping, Chadema (Party for Democracy and Progress), and the former official opposition, the Civic United Front (CUF), have not convinced me that they can change the lives of more than 40-million Tanzanians, who include some of the world’s poorest people.

The general election is for a president, Parliament and municipal councils.

The key poll is for the presidency but of the seven candidates, four, and their parties, are virtually unknown and have hardly campaigned.

CCM leader Jakaya Kikwete was the real deal when he came to power through an 80% landslide in 2005. Charismatic and charming, he was in stark contrast to outgoing president Benjamin Mkapa.

But five years later Tanzanians have a different view.

Kikwete has made commendable efforts on the education and infrastructure fronts but graft allegations have continued to haunt his government.

The infamous Richmond scandal, involving a dubious 172-billion Tanzanian shillings (TZS) (about R800-million) contract, forced the resignation of Edward Lowassa, the prime minister, and other Cabinet ministers in 2008.

This had never happened before in Tanzania but it wasn’t enough for me.

Then there was the two-year sentence meted out to former Central Bank director Amatus Liyumba in an unprecedented case of abuse of power by a senior civil servant. But the TZS221-billion (about R1-billion) loss that the government suffered was never recovered and there was no effort to do so.

Chadema’s presidential candidate, Willibrod Slaa, a former Catholic priest and MP of 15 years’ standing, has promised to fight graft, but his main weakness is his running mate, Said Mzee Said, who has been educated only at primary level.

As Said is Zanzibari, Chadema has met this requirement, but he is not a credible candidate.

In addition, Zanzibar is constitutionally required to have its own president and Chadema has not put up a candidate for the position.

That will affect its electoral performance in Zanzibar, which has more than 400 000 registered voters.

The CUF’s Ibrahim Lipumba is the most seasoned candidate, having run for the top office since Tanzania’s first multiparty election in 1995. But he has nothing new to offer.

Free voters
It is a pity that the field is so weak — a country that suffered 31 years of one-party rule under Julius Nyerere and Ali Hassan Mwinyi deserves decent choices. The new citizen is a free voter who has no ideological bond with any party.

But, as in other African countries the ruling party draws its strength more from its entrenched position and long-held voting habits than from actual performance. Many voters are still influenced by its former dominance of every aspect of their lives.

The CCM boasts about 4,5-million members, about 27% of the 20-million registered voters. Slaa may pull big crowds in campaign rallies but in past elections that has not translated into votes.

The hope is that through the parliamentary election Chadema will shake Tanzania’s power balance.

It is expected to win more parliamentary seats, weakening CCM dominance and potentially forcing the government to become more accountable.

Jiang Alipo is a Tanzanian journalist in a three-month internship programme at the M&G, as part of her winning the 2010 David Astor Journalism Award