But I live in Kagiso 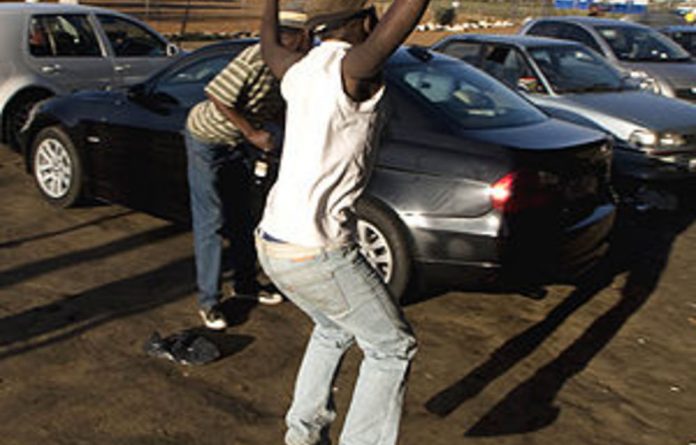 Each morning at 5:30 the mullah in Azaadville faces Mecca to call the faithful to prayer. But to most residents of nearby Kagiso, the predominately Christian township in the West Rand, the mullah’s dreamy chant of “Allahu Akbar” only marks the beginning of another long day mired in poverty and unemployment.

In a short while the gas chambers at South African Breweries’ (SAB) District West Depot on the eastern outskirts of the township will pump fumes into the grey atmosphere, leaving Kagiso smelling like skokiaan.

Because it is the biggest factory in the area, a sizeable number of Kagiso residents work here.

Like most of us, their nostrils have filtered the stench that permeates every part of daily life in Kagiso.

For as long as I can remember there’s been a rumour that soccer talent scouts, including Jomo Sono, the owner of second division outfit, Jomo Cosmos Football Club, are reluctant to even select soccer players from Kagiso, despite their talent, because here in Kagiso we “are all drunkards”.

Finest from Kagiso
Which is not entirely true, of course. We have, in the past 30 years, continued to produce some of the finest South African footballers ever to play the game, including greats such as Toyota Ramosa, Vincent Makroti, Andries Mpondo, Joseph Rapelego, Bradley Mahlonoko, Joseph Makhanya, Lucky Maretlwa and William Lerefolo.

But there is more to this township. Kagiso, which is Tswana for peace, is the most populous and by far the most vibrant of all townships in the far West Rand and the hometown of Gauteng Premier Nomvula Mokonyane. In recent years a number of Sowetans have moved here, mainly due to the township’s famed ­quietness.

Personally, I have been to places far better than Kagiso. But after 22 years of living here every grain of sand from the white mine dumps which surround the township and every pebble on its dirty sidewalks evokes memories: happiness, sadness, indifference.

This is my Kagiso — and I live here.

By the time the sun’s rays pierce the polluted skyline, minibus taxis queue at Sonap taxi rank and disappear en route to Johannesburg. In their hundreds they carry the hopes and wishes of thousands of family members who depend on those few bothers and sisters fortunate enough to have a job.

Silence, slumber and laughter
As they leave the township will succumb to silence and slumber, broken only by the laughter of unemployed folks huddled on street corners.

Kagiso, according to Mogale City Local Municipality’s statistics, is home to about 190 000 people.

The municipality says the township was officially proclaimed in 1920 when ex-miners and squatters on smallholdings on the outskirts of nearby Luipaardsvlei erected the first corrugated iron houses. By 1950 the number of squatters had grown, spawning the larger Luipaardsvlei and Lewisham township, southeast of Krugersdorp.

My family moved to Kagiso in 1988 from the erstwhile Bophuthatswana homeland. After all these years my three siblings and I remain proud residents, with our new families. Like many other township dwellers we aspire to move out of the township, to replace our small houses with bigger ones.

We aspire to send our children to better schools and we aspire to improved lifestyles.

Drive down Kagiso Drive
However, I am sure that if the township offered the option of better housing, the best education for our children and overall better living conditions all of us would stay here rather than move out to the former white suburbs. Come drive with me down Kagiso Drive.

A few metres on a clump of evergreen trees gives shade to a gathering of concrete tables and chairs. This is KoBareng (The Bar), where the township’s old timers sit all day with endless buckets of Ntakunyisa (make them shit) sorghum beer, also called Sebapa le masenke (staggering on the fences) or Bom, which comes from the semi-explosive ingredients added to fortify this drink.

Then you’ll find the infamous Kagiso hostel, with its multiple narrow columns of single-rooms where Zulu migrant workers have found refuge under unkind Highveld skies.

This is the site where hostel dwellers waged a war against township residents in the early 1990s. It is here that Archbishop Desmond Tutu failed to quell the rage of qwash! (hand-made gun) and AK-47-toting and panga-wielding hostel dwellers, who forced him and his entourage of activists to retreat.

Isolation from the rest
To this day Zulu hostel dwellers remain isolated in their dingy barracks, with limited or no contact with the larger community.

Not far from the hostel is the once impressive and well-maintained Kagiso Sports Complex, which used to be abuzz with activity every weekend. But in recent years footpaths have scarred the soccer fields and the fencing and equipment has been stolen.

These days local youths have taken to the streets, giving rise to small gangs and petty crimes. Those rife in the 1990s, including Abashwe (let them die) and Zafios (which comes from a North-Sotho television drama where the Zafios gang ruled Soweto with terror) were notorious for petty crimes and an odd stabbing here and there.

Nowadays, the Absa Gang, a group reportedly made up of teenagers from local high schools, is involved in muggings and assaults.

Many of the youth spend their weekends at plush places like Shimi’s Inn or more standard shisanyama (braai the meat) spots. But most young residents prefer the combination of turntables, braaivleis, car wash and booze set in street corners and in shopping centres.

“These are my boys,” shouts Lebogang Manyaka (26), self-proclaimed DJ and kasie pied piper, pointing to a group of dancers responding loudly to the din and shrill of one of Rihanna’s super hits.

Dreams, aspirations and a dance floor
Manyaka aspires to be a top DJ and follow in the footsteps of some of Kagiso’s popular musicians, Afro Pop and multiple South African Music Award-winning outfit Mafikizolo. “They groove to my beats every weekend — and is fokol is niks. When people are happy, I am the happiest,” he says, chuckling, before drawing a half-broken cigarette from the ­pockets of his torn jeans.

Manyaka spins discs and vinyls at a tavern in Tsakani section every week at no fee and boasts that the number of his followers is growing every day. Manyaka’s tools of the trade — a dusty old tuner, amplifier, a pile of copied audio discs — compete for space on the old wooden school desk, while two black boom speakers mounted on rusty tripods respond tirelessly to his frantic scratching efforts.

“Today, I have given my body a chance … no alcohol. I just want to rock these boys hard — it’s not as if I have anything better to do on weekends,” says Manyaka.

It’s this sort of youth culture that’s leading to substance abuse. One drug in particular, nyaope — a white powdered drug used to calm frayed nerves — has gained renown in township avenues and backyards. The township’s elders and community leaders are worried.

“[Our] boys smoke nyaope and girls are [dropping out of school] and getting pregnant. All we need as sport administrators in the township is municipality-driven sporting programmes and renovations to the facilities,” says Sonny Sathekge (39), owner and head coach of Kagiso Porto Football Club.

“I work with small boys and I try to motivate them to stay in sport but by the time they reach their teenage years they all quit sport,” says Sathekge.

But it’s not all bad here. In recent years the number of youths registering for university courses has increased, even if dropouts still outnumber those who successfully completed tertiary studies.

Something old and something new
Further along Kagiso Drive is the old civic area, where there is a library, the old police station, a clinic, the community hall and Heroes’ Square, where political meetings were once held.

On the left is the Excel filling station. My earliest memory of it is when it was still called Trek and was the only outlet in the township that sold solid ice.

Kagiso residents only permanently started enjoying the right to basic electricity in the early 90s and it is then that my father and I used to come on hot summer’s days for ice to cool my old man’s Hansas.

Queueing for ice under the blazing sun was a drag and, once bought, the ice would start melting. I would then have to catch up with my dad’s long strides as we rushed home, furiously pushing the melting block on a wheelbarrow.

A few metres away is Phenyo Supermarket. One of the oldest outlets in the township, it is famous for being the setting of the old local television dramas Masakeng and Ke Nako. But the market, like many other family-run spaza shops, has been bought out by Pakistani tradesmen; during the 2008 xenophobia attacks one of the stores run by a group of Pakistanis was torched, though it only suffered minimal damage.

Come together
The intersection of Kagiso and Sebenzisa, known as Sonap, is the meeting place for all Kagiso residents.

It is here that we come to cheer madly after a rare Bafana Bafana win, to protest for services, to catch a taxi to Johannesburg, Krugersdorp or Luipaardsvlei, to purchase water and electricity coupons or just to chill. But just as it did at sunrise, Sonap swarms with human activity at dusk, while minibus taxis frantically offload our beloved breadwinners in their hundreds.

Once again the mullah in neighbouring Azaadville will call the faithful to prayer. And Kagiso will succumb to a momentary slumber, only to rise again the next morning to the mullah’s dreamy chant, “Alllllllahu Akbarrrrr!!!!”

Dispatches: With you I know I cannot go wrong

Boipatong: Ghosts of a massacre

Dancing on his grave

‘Through Feni I examine myself’