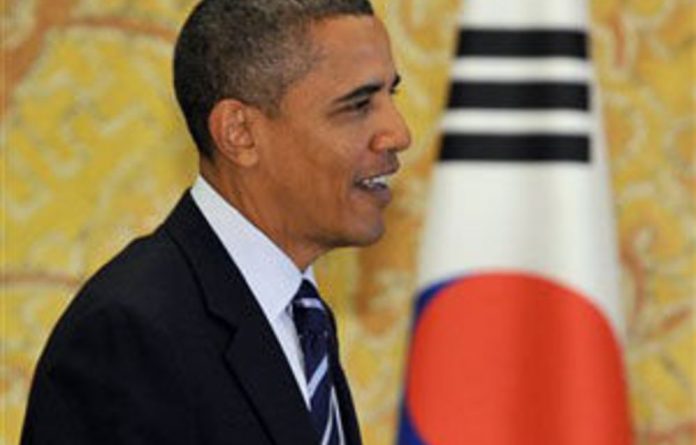 The world’s 20 biggest rich and emerging economies intensified a war of words hours before the start on Thursday of a summit devoted to recalibrating huge distortions in the global economy.

The summit’s South Korean hosts said negotiators were far apart on how to address imbalances that have worsened as China’s dramatic growth kicks on and America endures a snail-paced recovery from recession.

Talks among deputy finance ministers and senior officials stretched into the early hours of Thursday but failed to bridge differences, he said.

“They even failed to set today’s [Thursday] discussion schedule,” Kim said, adding the negotiators would hold another late-night session after G20 leaders open their two-day summit later on Thursday with a working dinner.

Having long chafed at US criticism of its currency policy, China has turned the tables with its own denunciations after the Federal Reserve instituted a $600-billion attempt to reflate the US economy.

Backed by Germany, Brazil and other G20 powers, China accuses the US of forcing the dollar down to trade its way back to prosperity, and says this could trigger a 1930s-style trade war if other countries respond in kind.

So US President Barack Obama, weakened already by an electoral drubbing at the hands of the resurgent Republicans, is braced for a chilly reception as the G20 holds its first summit in Asia two years after the global financial crisis.

Critics
Obama on Thursday was expected to hold one-on-one talks with two of the strongest critics of his administration’s economic direction — Chinese President Hu Jintao and German Chancellor Angela Merkel. Merkel on Thursday attacked “political” limits on national trade surpluses, hitting back at US proposals to tackle world economic imbalances.

“To set political limits on trade surpluses and deficits is neither economically justified nor politically appropriate,” she said in a speech to a G20 business summit, hours before leaders of the grouping start meeting.

The US had earlier proposed limiting current account surpluses or shortfalls to 4% of a nation’s output.

Obama flew into Seoul insisting that a robust US recovery, aided by the Fed’s revival of “quantitative easing”, remained the best guarantor for a strong dollar and for global economic health.

And in a letter to his fellow G20 leaders, he kept up demands for fast-growing exporting giants such as China to end the “significant undervaluation” of their currencies.

Global recovery from the financial crisis cannot be achieved by emerging economies alone, US Treasury Secretary Timothy Geithner said in a Wall Street Journal commentary co-written with his Australian and Singaporean counterparts.

Rich and developing economies must work together because “emerging economies, while growing quickly, collectively represent only about a third of global output, and overall growth for the world at large is still not strong enough”, the trio wrote.

But there is rampant criticism of the US proposal to limit trade imbalances, as a backdoor way of forcing China to realign its currency.

At best, South Korean officials have suggested, the G20 may settle for a watered-down deal to task the International Monetary Fund (IMF) with crafting guidelines to trim the yawning imbalances between creditor and debtor nations.

Less troublesome
The G20 leaders are expected to find other parts of their agenda less troublesome — including endorsement of the biggest shake-up in the IMF’s 65-year history to give emerging powers such as China a greater role.

The heads of government will also reprise discussions on shoring up the capital reserves of major banks, after Wall Street’s near-death experience in September 2008 prodded the G20 into elevating its meetings to summit level.

But highly technical negotiations on tackling companies deemed “too big to fail” require much more work, as G20 officials thrash out how to approach the cross-border implications of any new failures by large finance firms.

South Korean President Lee Myung-Bak told a meeting of business leaders on Thursday that he foresaw “intense discussions” over how best to retool the global economy in the post-crisis phase.

But warning anew against the perils of protectionism, he said: “Each country can try to survive on its own in the short term, but in the end the world economy will end up regressing.” — AFP