Simelane involvement in Block case ‘a show of force’ 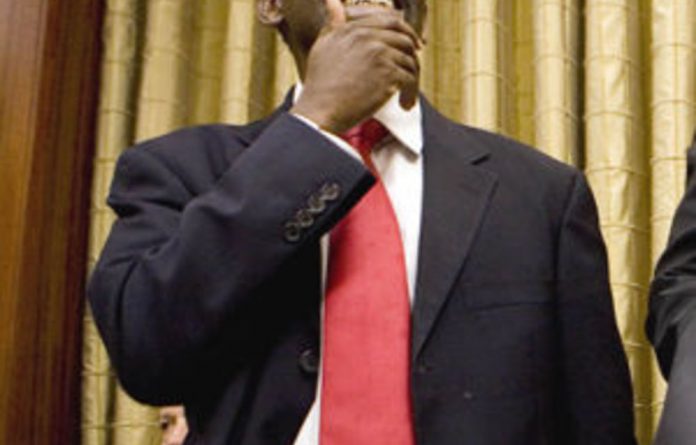 The national director of public prosecutions, Menzi Simelane, has raised legal eyebrows by choosing to become personally involved in prosecuting one of the biggest fraud and corruption cases the country has ever seen.

In the week the Democratic Alliance (DA) had its court application to set aside Simelane’s appointment as head of the National Prosecuting Authority (NPA) dismissed, his donning of prosecutors’ robes has become a talking point in the legal profession.

Some senior legal figures say Simelane is “simply putting a spin on it” by declaring he will lead the way in prosecuting the case involving Northern Cape provincial ANC leader John Block and ANC benefactor and Ithala Bank chief executive Sipho Shabalala.

But others say that, because of the political ramifications of the case, Simelane’s throwing his weight behind the prosecution team sends a “good message”. Even those who applaud his actions, however, confess they are “a bit nervous” that he has chosen to dirty his hands with this particular corruption trial.

Simelane’s spokesman, Mthunzi Mhaga, said Simelane was adopting a “hands-on approach” to the work of the NPA. “He’s leading by example, which is inspiring to prosecutors. They can learn a lot from the prosecutorial expertise he has displayed so far,” he said, pointing out that Simelane “is not the kind of leader who gives orders behind a desk from head office.”

“People are just questioning why he wants to be involved in this particular case,” a legal figure said. There was “some warning, though”, said the same source: “Simelane went around before the trial started, saying he was going to be ‘hands-on’.”

Simelane caused a stir in the Pietermaritzburg Regional Court last month when he appeared in a prosecutor’s robe. In the hearing, the state did not oppose the granting of bail to Shabalala and his wife, Beatrice.

As the head of the KwaZulu-Natal treasury between 2004 and 2007, Shabalala was accused of using R44-million from the provincial Poverty Alleviation Fund to pay Itaka Holdings for water-purification plants at an inflated price and receiving a kickback of R1,05-million.

His wife was accused of money laundering in that she allegedly kept R300 000 of the R1.,5-million in her company’s bank account. Bail for the Shabalalas was set at R50 000 each. This week, Simelane again donned prosecutor’s robes when the state opposed bail for Block and Itaka owner Gaston Savoi in the Kimberley Magistrate’s Court. But magistrate Lance Roach granted them bail of R100 000 each. Delivering judgment, Roach said it was not comprehensible why the state had changed its mind and decided to oppose Block’s bail. It could only be speculated that there was either a “political agenda” or a “show of force” behind the decision.

A respected legal figure said it would be worrying if Simelane decided to prosecute the entire case, but his handling of the bail applications was not cause for major concern.

Another legal source said that although there was “nothing in the rule books to stop Simelane from stepping in”, neither of his two predecessors, Vusi Pikoli and Bulelani Ngcuka, “did something like this”. Simelane had certainly set a precedent, said a third legal professional. And “it is rather disquieting, considering he has absolutely no court experience”.

The DA’s unsuccessful court bid to have Simelane’s appointment as prosecutions director set aside homed in on Simelane’s limited court experience. He had been an advocate for only two years and, at just 38, was “very young” for the position, the DA said.

DA correctional services spokesperson James Selfe said in his affidavit at the time that the CV Simelane submitted to support his appointment reflected no court cases in which he had appeared. The CV, which the DA described as “shoddy” in presentation, said Simelane practised at the Johannesburg Bar from 1997 until 1999.

“My area of practice at the time involved general litigation in the high court. In particular, I dealt with civil and criminal matters,” he wrote.

Simelane had also served for only about six weeks as one of the four deputy national directors of public prosecutions, contended Selfe in his affidavit. Selfe said this week the DA would study the judgment to plan its next move.

“From first principles, we consider this matter to go to the heart of our criminal justice system and, in that regard, the possibility that we might pursue the case to the Constitutional Court is a real and viable option,” he said.

The DA’s initial reading of Judge Piet van der Byl’s ruling was that there appeared to be no basis in law for reversing the president’s appointment of Simelane, but it also seemed to agree with the DA that there were reasons to question Simelane’s suitability for the position.

The judge said he was not persuaded that Simelane was “not a controversial person and one with an unblemished background or that he is one of the most experienced persons who could have been taken into consideration for appointment.”

The judgement also appears to support the DA’s view that superficial consideration was given to the election: “There is no indication that the president has given any attention to any other possible candidates,” read the judgment. “On the contrary, all indications are that the president favoured Mr Simelane, and no one else, for the position.”

But there's no sign yet that Communications Minister Faith Muthambi will be asked to explain her role in Hlaudi Motsoeneng's rise to the top.
Read more
National

Mike Hellens has asked Menzi Simelane if he was trying to "duck the obligation" to hand over a letter after lawyers requested all correspondence.
Read more
National

‘No say in Ginwala inquiry’ – Simelane

Former NPA boss Menzi Simelane said that he did not determine what documents made up the government's submission to the Ginwala inquiry.
Read more
National

Top KZN cop Johan Booysen is hauling the state to court, claiming he was falsely accused to put a lid on his corruption-busting activities.
Read more
Advertising
Continue to the category
Education