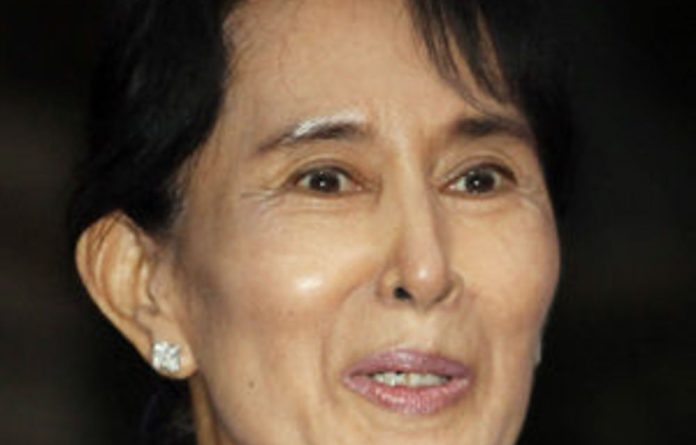 Burma democracy champion Aung San Suu Kyi walked out of her home to rapturous cheers from thousands of supporters on Saturday after the country’s military rulers released her from seven years of house arrest.

“People must work in unison. Only then can we achieve our goal,” the Nobel Peace Prize-winner said, smiling as she clenched the tops of red-iron gates bordering her crumbling lakeside mansion, her hair pinned with flowers.

Suu Kyi has spent 15 of the past 21 years in detention due to her opposition to 48 years of military rule in Burma.

She had her house arrest extended last August, when a court found she had broken a law protecting the state against “subversive elements” by allowing an American intruder to stay at her home for two nights.

Her release gives Burma a powerful pro-democracy voice just days after a widely criticised election and will rekindle debate over Western sanctions on the resource-rich country of 50-million people nestled strategically between China and India.

After speaking to supporters, some of whom handed her flowers, Suu Kyi returned inside her home for the first meeting with her National League for Democracy party in seven years.

World leaders applauded her release, expressed relief and urged the military junta to free more of its estimated 2 100 political prisoners.

“The United States welcomes her long overdue release,” US President Barack Obama said in a statement. “It is time for the Burmese regime to release all political prisoners, not just one.”

British Prime Minister David Cameron said her freedom at the end of her latest period of house arrest was long overdue. “Freedom is Aung San Suu Kyi’s right. The Burmese regime must now uphold it,” he said.

German Chancellor Angela Merkel echoed Obama and others in calling on Burma’s rulers to free all political prisoners.

“Aung San Sui Kyi is a symbol for the global fight for the realisation of human rights. Her non-violence and relentnessness have turned her into an admired role model,” the German government said in a statement.

Supporters had gathered near her lakeside house throughout the day, many chanting “Release Aung San Suu Kyi” and “Long live Aung San Suu Kyi”. Some wore T-shirts emblazoned with messages pledging to stand with her.

As the crowd swelled, riot police armed with guns and tear gas ordered Suu Kyi’s increasingly vocal and anxious supporters to move back from the barricades.

Mesmerising inlfluence
A November 7 election, the first in 20 years, was won by an army-backed party. Freeing Suu Kyi, daughter of the slain hero of Burma’s campaign for independence from Britain, may give the ruling generals some degree of international legitimacy.

The move could help lead to a review of Western sanctions on the resource-rich country, the largest in mainland Southeast Asia and labelled by rights groups as one of the world’s most corrupt and oppressive.

“The regime needs to create some breathing space urgently,” said a retired Burmese academic, who asked not to be identified.

Suu Kyi is still believed to have the same mesmerising influence over the public that helped her National League for Democracy win the last election in 1990 in a landslide, a result the military ignored.

She is capable of drawing big crowds to the gates of her home in Rangoon and, with a few words could rob the election of any shred of legitimacy it might have, possibly seeking to have the results annulled on grounds of fraud.

Many experts say sanctions benefit the junta, allowing generals and their cronies to dominate industry in the country rich in natural gas, timber and minerals with a strategic port in the Bay of Bengal.

Trade with the West has been replaced by strengthening ties with China, Thailand and Singapore, whose objections to the regime’s human rights record are relatively muted.

“There are a lot of people with a lot at stake in maintaining the status quo,” said Sean Turnell, an expert on Burma’s economy at Sydney’s Macquarie University. – Reuters