Seoul recovery an inspiration for G20 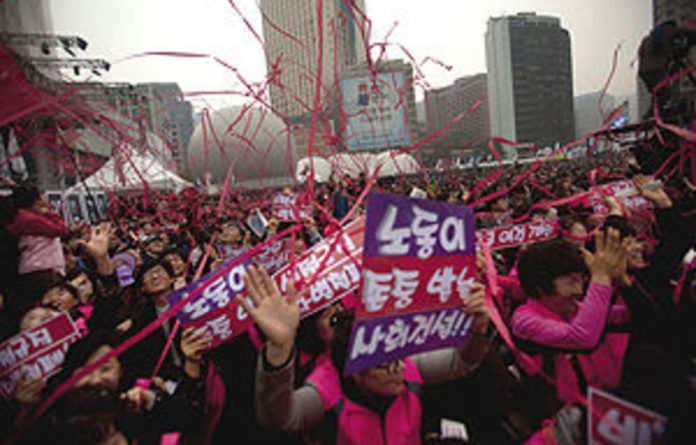 The G20 [group of 20] summit has just started in my home town of Seoul. The South Korea meeting has symbolic importance — the first time the world’s new top table has met outside countries of the G7 [group of seven], which the G20 replaced last year as the leading global body for policy coordination.

Now that the initial crisis response is over, the G20 is looking for a mission. My fellow Koreans want that to be development, especially of the world’s poorest countries. But before welcoming this agenda we need to ask what kind of development the G20 should promote.

An obvious place to look for inspiration is the recent history of the host country. In my lifetime Korea has lived through one of the greatest development miracles — half a century ago its annual per capita income was around £50, less than half that of Ghana at the time.

Today it stands at £12 000, putting it on par with Portugal and Slovenia. How was this possible? Korea, of course, did things that most people agree are important for economic development, such as investment in infrastructure, health and education.

But on top of that, it also practised a lot of policies that are now supposed to be bad for economic development: extensive use of selective industrial policy, combining protectionism with export subsidies; tough regulations on foreign direct investment; active, if not particularly extensive, use of state-owned enterprises; lax protection of patents and other intellectual property rights; heavy regulation of both domestic and international finance.

The G7 was always remarkably reluctant to recommend these “heterodox” policies and insisted that the “Washington consensus” package of opening up, deregulation and privatisation was the right recipe for everyone.

Exception?
When confronted with the Korean case, Washington consensus supporters tried to brush it off as an exception. However, the history of take-offs in most of the G7 countries — especially Britain, the United States, Germany, France and Japan — is far closer to the Korean model than is commonly thought.

The “unorthodox” policies used by Korea and almost all of today’s rich countries need to be seriously considered in any discussion of development options.

Will things change with the launch of the G20 development agenda? An examination of the Korean government’s proposals suggests we can muster only cautious optimism.

The Koreans reject the “one size fits all” approach of previous decades in favour of what they call a “dynamic iPhone model” — a set of development applications for every occasion, drawn from successful approaches in different countries. But there are big holes too.

“Infant industries”
Industrial policy is conspicuous by its absence. The Korean experience shows that sustainable export success over a long period of time, for which the country is justly famous, requires protection and nurturing of “infant industries” through selective industrial policy, rather than free trade and deregulation. And there is no mention of land reform and other measures for asset redistribution, which created social cohesion that made development in Korea sustainable.

Then there’s cash. True, the G7 agenda sometimes seemed to equate development with aid. However, the Korean proposals have gone too far in the other direction, making only passing mention of the importance of improving aid flows both in quality and quantity.

If these gaps can be addressed, the Seoul meeting could mark a watershed — the start of a new, realistic and historically literate approach to development, after decades of misguided market fundamentalism. Sure the G20 is a talking shop, but talking shops have a role – they confirm or challenge the “common sense” of the time.

A Seoul consensus based on the history of my country could be both fairer and more effective than the Washington variety that has lost its intellectual and pragmatic credibility. — Guardian News & Media 2010

Ha-Joon Chang teaches economics at the University of Cambridge. He is the author of 23 Things They Don’t Tell You About Capitalism

Five key moments from the G20