Bets and belt-tightening ahead of UK royal wedding 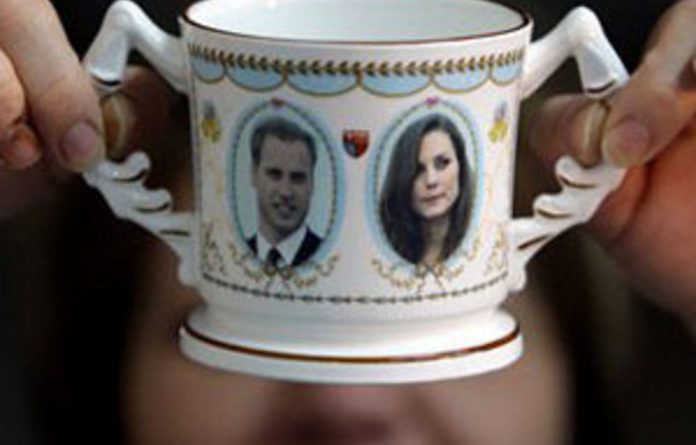 Royal courtiers were pondering on Wednesday how to tailor the wedding of Britain’s Prince William and Kate Middleton to the austere times and Britons began betting on the likely date for the ceremony.

The wedding — which according to one estimate will boost Britain’s economy by nearly $1-billion — has been widely hailed as a welcome respite from budget cuts and belt-tightening.

After years of speculation, Prince William has finally announced his engagement to long term girlfriend, Kate Middleton. View our slideshow as the royal family, as well as, the whole of Britain, celebrate the news.

But amid the celebrations and the flood of congratulations from around the world, it has also raised the awkward question of who should foot the bill.

Buckingham Palace confirmed it was due to sit down with royal advisers to work out the details, but was tight-lipped on a likely date or whether the ceremony could be held at the kind of venues that hosted his father’s and his grandmother’s nuptials.

Queen Elizabeth married at Westminster Abbey. Charles and the late Princess Diana tied the knot at St Paul’s Cathedral. William and Kate, both 28, have so far revealed only that the wedding will take place in either the spring or summer next year with bookmakers tipping July and August as favourites.

Bookmaker Graham Hill said July was marginally ahead on 15/8 with August at 2/1.

July 29 — the 30th anniversary of the spectacular wedding of his parents — is another hot favourite, while the Daily Mail newspaper said royal aides had made “discreet overtures” to Westminster Abbey about the possibility of August 12 or 13.

A spokesperson for William said the couple would be “mindful of the economic situation” in a move clearly designed to show the palace remained in touch with ordinary people.

Britons spoken to close to Buckingham Palace, in central London, appeared unfazed by the potential cost of the ceremony.

“It will bring more in than it costs to do, which is probably more than you can say about the Olympics,” said Kevin Reed from Nottingham in central England.

Jan Cornworth, from Wolverhampton, central England, welcomed the news. “There’s too much misery around,” she said. “It’s nice to have something good going on and it’s for the people isn’t it? — as well as for them.”

The Daily Telegraph in Sydney, Australia, noted that an overly ostentatious occasion would leave a “sour taste”.

But it added: “In a kingdom forced to tighten its belt, a showpiece royal wedding could lift the national mood, giving subjects a glittering event to focus on rather than the coalition government’s spending cuts.”

In Britain, republican sentiment was already beginning to rear its head.

Anti-monarchy group Republic said taxpayers should not pay for the wedding, saying it should be a “private event”.

Stephen Haseler, professor of government at London Metropolitan University, accused the British establishment of using the occasion to distract the public from the downturn.

“They are seeing this as something to distract people from the coming unemployment queues,” he told BBC radio.

Boost to economy
Retail researchers Verdict said on Wednesday that the marriage could give a £620-million ($985-million) boost to the economy, thanks both to sales of memorabilia and a more general “feel good” effect on consumers.

The forecast came as Asda, Britain’s second-biggest supermarket group, said it was already selling a £5 mug to commemorate the engagement.

Verdict estimated the engagement could be worth £12 to £18-million in merchandise sales, while sales of wedding-related products could top £26-million.

“If, as expected, it is a big set-piece event, it could well capture the nation’s imagination and provide a fillip to the retail sector,” said Verdict consulting director Neil Saunders.

Verdict forecast food and grocery retailers could benefit to the tune of £360-million as shoppers buy treats like wine and champagne to toast the happy couple, while travel and tourism revenues could be boosted by an estimated £216-million. – Reuters