How Julius got off the hook 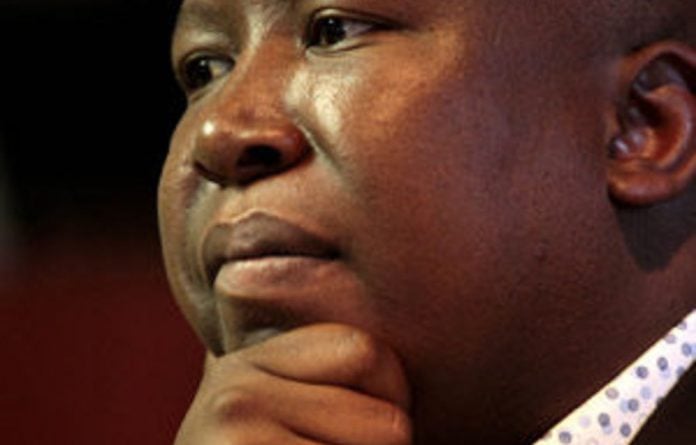 The ANC’s national leadership overrode the recommendation of Gwede Mantashe, its secretary general, that Julius Malema, the ANC Youth League president, and other league leaders should be charged for storming the stage ­during the party’s national general council (NGC).

The league sees it as a slap in the face for Mantashe, whom the league regards as Malema’s main organisational enemy. It also reflects a new push by party leader Jacob Zuma to draw Malema back into the ANC fold.

A confidential document penned by Mantashe and presented to both the ANC’s national working committee (NWC) and national executive committee (NEC) recommends that the actions of Malema and other league leaders during the plenary session of the council meeting in September should be referred to the party’s national disciplinary committee “for determination of a complaint, as per rule 25,6 [a] of the ANC­constitution”.

The incident was triggered by the unhappiness of some delegates with a ruling by Jeff Radebe, an ANC NEC member and justice minister, who chaired the session, not to allow amendments to a resolution on nationalisation to be read out.

This week Mantashe denied in an interview that the recommendation in his report to the NEC contradicted what the leadership had ultimately recommended. “The reality of the matter is that we recommended the political solution to the problem [and] not disciplinary charges,” he said.

Both the working and executive committees opposed disciplinary action, Mantashe said. “In the [NEC] meeting we said, in writing that report, we forgot to insert the ‘not’. It was corrected.”

But in his report Mantashe made a powerful case for disciplinary action against the league and some of its leaders, who were shown in camera footage to have disrupted proceedings. The report highlights the physical risks inherent in the youth league’s actions. He said it would have embarrassed the ANC if more delegates had become agitated and stormed the stage — it could have posed a huge danger to the ANC leadership.

“The presidential protection team would have reacted aggressively and mowed down those who stormed the stage. Such would have caused untold chaos at the NGC,” Mantashe said in the report.

The recommendation that the youth league delegation should be charged was meant to send “a clear message that such behaviour is intolerable no matter what circumstances pertain”, Mantashe said.

Disruptive
Analysis of camera footage, documented in detail in Mantashe’s report, found that the youth wing delegation consistently flouted the rules of the conference as adopted by the plenary, deliberately tried to overrule the chairperson on more than one occasion and that their actions were disruptive even before they invaded the stage. It was not clear why the delegation felt it necessary to mount the stage, the report said.

“Even if the delegation had good cause to go on stage and did not intend to harm the persons of the president [Jacob Zuma], deputy president [Kgalema Motlanthe] and former deputy president of the country [Baleka Mbete], their actions could have caused a diversion and created an opportunity for elements who may have wished to cause harm to these persons,” Mantashe said in the report.

The behaviour of the youth league delegation constituted acts of misconduct in that it brought the organisation into disrepute, sowed political intolerance, threatened to provoke serious divisions or a breakdown of unity in the organisation, involved participation in organised factional activity that went beyond the recognised norms of free debate, and deliberately disrupted meetings and interfered with the orderly functioning of the organisation.

The Mail & Guardian understands that Zuma came to Malema’s defence on the grounds that disciplinary action against him would deepen divisions in the ANC.

“JZ’s view is that charging Malema now would take the ANC backwards. His argument was that the mood in the country was such that the ANC should build from the successes of the NGC and take the organisation forward,” said an ANC NEC member.

“He felt that the ANC is at a point of relative stability. He made it clear that he does not want to do anything that would cause further divisions in the ANC.”

But Zuma’s critics in the party said that his more conciliatory tone towards Malema is informed by his ambition to be re-elected ANC ­president in 2012.

Some league members have said they will support Motlanthe to take over from Zuma. The league is also campaigning for Fikile Mbalula, the minister of sports and recreation, to replace Mantashe as secretary­general.

Another senior ANC leader who attended last week’s NEC meeting said that delegates at the meeting had asked Mantashe to amend the NWC report to state that disciplinary action should not be taken against Malema and other league leaders.

“We just asked him to insert ‘not’ into the report. So the ‘not’ was added at the meeting,” said the NEC member, who is a senior parliamentarian.

“We looked at the whole issue and decided we wanted it closed. It was decided we want to keep the part about giving ‘political guidance’, but that there should be no disciplinary action.”

The original report that Mantashe took to the NEC reads:

“Based on the report and detailed explanation from the officials, the national working committee decided to recommend to the NEC that addressing this incident should be through an appearance of those affected before the disciplinary committee, and that the matter should also be dealt with as a political problem whose long-term solution lies in the consistent political guidance ­provided.”

The ANC source said Mantashe had simply agreed to insert the word “not”. “It was clear the majority of the people there had spoken and they didn’t want this thing, so he couldn’t say anything. There were no tensions, no differences. The meeting was done in a good spirit.”

It was obvious that some lobbying had taken place around the issue, the NEC member said.

Another NEC member and a provincial leader said that the NWC recommended that no disciplinary action was needed and that the ­decision was endorsed without opposition.

‘Julius should be dealt with’
“It was felt the political risk of hauling Paul [Mashatile] before a disciplinary committee, given that he saved the NGC by intervening between the warring parties, was too big,” an alliance leader said.

“Everyone was resolute after the NGC that Julius should be dealt with and that everyone involved should go to a disciplinary committee, but later it was clear it would not be so easy because Paul was involved.”

Meanwhile, the ANC’s nationalisation debate took a new turn this week with the youth league insisting that research into the viability of the nationalisation of mines should be politicised and the ANC arguing for independent research into the issue. The ANC announced earlier in the week that it had approached the Council for Scientific and Industrial Research (CSIR) and the Human Sciences Research Council (HSRC) to help investigate the viability of nationalising the mines.

“We have started talking to both the CSIR and the HSRC to second two researchers to the project. We are also raising funds for the position of a project manager to coordinate the work on a day-to-day basis,” said Mantashe’s report to the NEC.

The team, which will be given a year to complete the project, should be in place by the end of next month.

The party’s economic transformation committee is expected to assemble a task team to act as a reference group to which the research team will report, with the aim of producing a report and clear recommendations by December next year.

But the youth league has warned it will not accept “academic” or independent research. “The ANC Youth League will support all research on nationalisation of mines which is not depoliticised and taken out of its original political context and strategic vision of the ANC, the Freedom Charter,” Floyd Shivambu, the league’s spokesperson, said in a statement this week.

“Nationalisation of mines by the ANC-led government is neither a technocratic nor academic exercise, but a political and economic transformation programme expressed in the Freedom Charter, which remains the strategic vision of the ANC-led liberation movement,” he said in the statement.