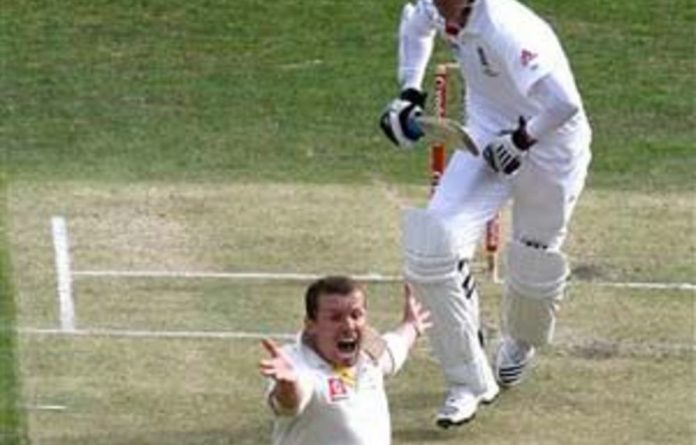 Peter Siddle celebrated a hat-trick and career-best test figures on his birthday to bowl Australia into a commanding position against England after the opening day of the first Ashes Test at the Gabba Thursday.

The stout-hearted Victorian paceman sent England reeling with a stunning hat-trick as he captured six for 54 to help dismiss the tourists for 260 and put Australia on top.

At the close, Australia had negotiated seven overs in fading light to be 25 without loss and trail England by 235 runs with Shane Watson on nine and Simon Katich not out on 15.

The test match exploded into life in Siddle’s 12th over late in the day when he dismissed Alastair Cook, Matt Prior and Stuart Broad with consecutive deliveries to rip the heart out of the England innings after skipper Andrew Strauss had won the toss.

It was the 11th time an Australian bowler has captured a test hat-trick and came on the day of Siddle’s 26th birthday.

Siddle more than justified his selection ahead of Doug Bollinger when he single-handedly bowled Australia into a powerful position against the Ashes holders.

He followed up the significant scalps of Kevin Pietersen and Paul Collingwood in the space of nine balls in the middle session with four wickets in the post-tea period.

The England innings collapsed spectacularly with Siddle’s dramatic hat-trick, sending them spinning from 197 for four to 197 for seven in just the space of three spellbinding deliveries.

Crowd roaring
Siddle brought the crowd roaring to its feet when he dismissed Broad leg before wicket to bring up his hattrick after having Cook caught by Watson at first slip and bowling wicketkeeper Prior.

It was an electric atmosphere as Siddle charged in on the hattrick ball and hit Broad directly on his boot in front of leg-stump, prompting umpire Aleem Dar to raise his finger to send the ground into uproar.

Only Ian Bell, Cook and Pietersen, yet again fleetingly, offered any great resistance on an easy playing pitch.

Bell followed up his 192 against Australia A last weekend with another encouraging fighting display of 76 off 131 balls, sticking it out while wickets clattered around him.

Cook occupied the crease for nearing five hours for his 67 off 168 balls with six fours, while the dangerous Pietersen got another start only to throw it away on 43.

He went on the front foot to drive only to get a thick edge off Siddle to find Ricky Ponting at second slip.

Collingwood only lasted eight balls before falling in Siddle’s next over, edging to Marcus North at third slip for four.

In the morning session, England lost the wickets of skipper Andrew Strauss off the third ball of the match and Jonathan Trott in the 14th over.

Strauss sliced a wide Ben Hilfenhaus delivery straight to Mike Hussey in the gully for a duck.

Strauss’s dismissal follows his inglorious last series in Australia four years ago when he made just 247 runs at 24,70 and scored only one half-century in his 10 test innings.

Watson bowled Trott for 29 with an inswinger on the last ball of his opening over which collected his off-stump.

England have not won the Brisbane Test since Mike Gatting’s team prevailed by seven wickets six tours ago — on the way to their last Australian series victory in 1986/87. — Sapa-AFP