The case of Davidsonville 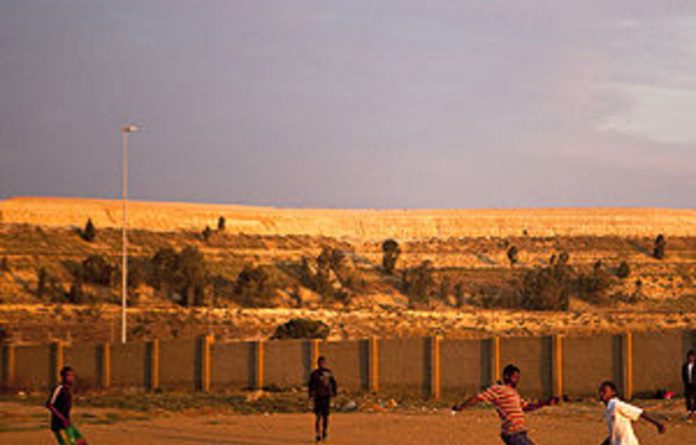 Margaret Jacobson is sweet, small and crinkled. At 56 years old she gives off the air of having been through hard times but having moved on from them, happily resigned to what life has given her.

I found Jacobson on a bright Sunday afternoon, sitting on her well-manicured lawn and chatting to her husband of 31 years. To her right was her slightly beaten-up, silver car, behind her a brick wall and directly behind that a partially covered mine dump, sitting a couple of metres away from where we were standing. Like hundreds of people in the town of Davidsonville, in Gauteng’s West Rand, Jacobson said: “The mine dump is my neighbour.”

Davidsonville is a predominantly coloured community brimming with memories of residents being uprooted from their Johannesburg homes under apartheid.
Over the past several years the town’s notoriety can be attributed to the seepage of acid mine drainage from the Western Basin decant, which has infected its wetland, centrally located just metres from houses and Davidsonville’s only primary school.

Sitting stagnant among piles of garbage, the once-pristine water now bears a telling white crust along its edges, emanating a vinegar-like smell. A test done by the Mail & Guardian confirmed that the water had a pH of 2, more acid than water.

From the wetland one can see two prominently eroding mine dumps. They are just metres away from hundreds of Davidsonville’s houses. During heavy rains, the streets are slick with white tailings dust.

This is a community literally sitting amid tonnes of mine waste. Environmental activists and lawyers claim that Davidsonville should never have been built, given its proximity to unremediated tailings dams. Carin Bosman, the former director of Water Resource Protection and Waste at the water affairs department, claims that the dumps were never properly rehabilitated by their owners, and there have been several over many decades, making liability difficult to pinpoint.

Despite this, “the Jo’burg City Council still approved housing development on the edge of a slimes dam,” she said. “Normally you would have a buffer zone between a heavy industrial area and a residential development, but not here. The government said ‘lets put the poor people next to the slimes dam’. It’s environmental classism or racism, call it what you want.”

Figuring out why the development was approved, and who should be held accountable, is difficult. While Davidsonville has been around for decades, parts of the town were built only within the past few years.

“If it was built after 1996 it should have an environmental impact assessment (EIA),” said Bosman. “If it was not necessary to do EIAs at that stage, there were certainly laws and bylaws which would have prevented a community from being built there. Somewhere, somebody didn’t follow the law and should be held accountable.”

Dumps and dust
Jacobson has battled the mine dumps for years. In 2008 she witnessed a flood of mine tailings wash through her house during heavy rains. The city council came to assess the damage and promised to pay for some of the clean-up, but Jacobson said they never returned.

“My furniture is gone!” she said. “And it’s going to happen again, because you’ve got no control over nature.” Jacobson looked outside at the summer clouds. “The rain is coming and it’s going to be the same.” The wall meant to protect her house from the mine dump is barely 1,5m high. Jacobson and her friends and ­family complain of chronic and severe asthma.

A waif-thin woman named Joubida Fischer (57), peering out of her sub-economic housing apartment just metres from the mine dump, told me about her fight against disease.

Many Davidsonville houses are home to several generations, raising concern about the health of young children. “My brother’s grandson is also asthmatic and my late brother’s son is also asthmatic,” said resident Miriam Joseph. “It’s young and old, even little children. There’s a little boy who’s not even yet in school who has had asthma for quite some time.”

Unprotected
While the dumps have always posed a threat, the relatively new hazard of an acidic wetland worries many residents. Children walk through the wetland on their way to school. Poor residents collect garbage that has piled upon the water’s banks in the hope of making a few rands. No signs warn of contamination and potential radiation or toxicity from uranium – and no fence deters anyone from entering.

Several fatalities have occurred among children playing in the dumps. Two children were buried by mine tailings and suffocated in the 1980s. In 2007 a one-year-old child, Leandre Fisser, fell into the polluted water and nearly drowned, staying in hospital for more than a week. Resident Leticia Stuurman blamed lack of education and a scarcity of public notices for the fatalities and accidents.

“If we had a fence, they would know not to go there,” she said. “And then we must educate people, especially the schoolchildren.” When asked who should pay for this, she said: “Isn’t there money somewhere? The environment must have a budget.”

Central to the lack of responsibility for cleaning up the pollution is the fact that the water originates from many different empty and flooding mine shafts across the Western Basin, most of which were abandoned years ago. Proving liability is difficult, leaving government to foot the bill. “The government must pay for it,” said Stuurman. “It’s the mining companies’ responsibility, but if you can’t get hold of them, what do you do? There’s nobody else that you can speak to.”

In spite of continued complaints to the local municipality, residents said nothing has been done to remediate either the dams or the polluted water.
Stuurman, who was on the local council for 11 years, said: “The council will just come and write a report and you never see [it]. Will you ever get an answer? No. It’s a talk show, but nothing is really happening.”

According to Democratic Alliance councillor Jacy Matladi of the City of Jo’burg Metropolitan Municipality, “local and provincial laws aren’t strong enough for us to do anything to make sure the dumps are cleaned up. That falls under national jurisdiction.”

The human settlements department did not respond to requests for comment about the situation in Davidsonville. Stuurman called for the community to be more involved in putting pressure on the government to clean up the mess.

“Everywhere the president goes, you must inform him about what’s happening, you must write him letters and invite him to come see how poor we are here. I’m going back to council in 2011. I’m going to try to see what can be shaken. We can’t stay like this.”

This piece is part of a series on acid mine drainage. For more on AMD, visit http://www.mg.co.za/amd. This project was made possible by funding from the Open Society ­Foundation for South Africa’s Media Fellowship Programme

Kampala’s good for a gander

The magic of Maputo

The bar that caused all the trouble in historic Bo-Kaap

Bold land of baklava and bazaars.