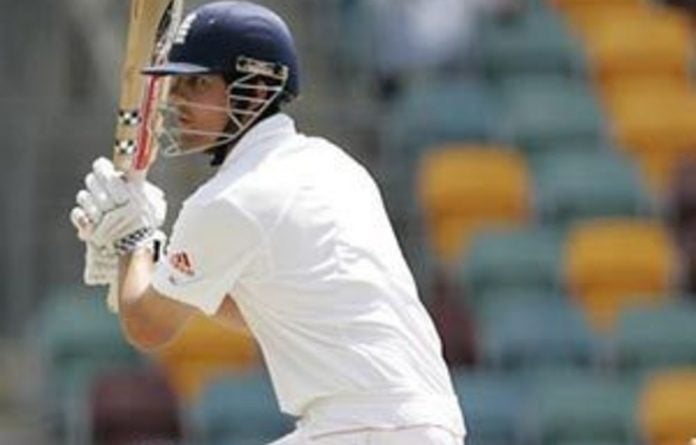 Alastair Cook became only the fourth Englishman to score a test double-century in Australia as the first Ashes Test headed for a draw on the final day at the Gabba on Monday.

Cook joined Wally Hammond (3), Reg Foster and Paul Collingwood as double centurions with his unconquered 235 to ensure the Ashes holders avoided defeat after trailing by 221 runs on the first innings.

Skipper Andrew Strauss finally called a halt to England’s run pillage at 517 for one, 40 minutes before tea, with Cook and Jonathan Trott, unbeaten on 135, sharing in England’s highest partnership in Australia of 329 runs.

Australia lost the wicket of Simon Katich for four in the seven overs to tea and were desperate to avoid further damage ahead of this week’s second Adelaide Test.

At tea, Australia were 11 for one with skipper Ricky Ponting on six and Shane Watson yet to score.

Katich was caught at first slip by Strauss off Stuart Broad in the sixth over.

Records and personal bests kept tumbling for England on the last day as Cook and Trott pummelled the Australian bowlers.

Cook posted his highest score among his 14 test hundreds off 428 balls in over 10 hours at the crease with 27 fours, while Trott’s fourth test ton came off 266 balls in 363 minutes with 19 fours.

When Trott’s 100 came up it was the first time three English players scored a century in an innings of a test match since 1924.

On that occasion the top three batsmen — Jack Hobbs (211), Herbert Sutcliffe (122) and Frank Woolley (134 no) — all scored hundreds against South Africa at Lord’s.

Cook surpassed his previous highest Test score of 173 and also passed Ian Botham’s 138 as the highest English run scorer at the Brisbane ground, set back in 1986.

It was also only the second match in Test match history to feature two 300-plus partnerships following Mike Hussey-Brad Haddin’s 307-run stand in Australia’s first innings.

The other was the drawn Pakistan v India first Test in Lahore in 2006.

England landed psychological blows on the Australians as Cook and Trott had little trouble before a small last-day crowd dominated by England’s taunting Barmy Army fans.

More salt was rubbed into Australia’s wounds with two more dropped catches, making a total of five for the match.

Vice-captain Michael Clarke put down a regulation chance off Trott (75) at slip off Shane Watson’s bowling and Ponting dropped Cook (222) in the slips. — Sapa-AFP