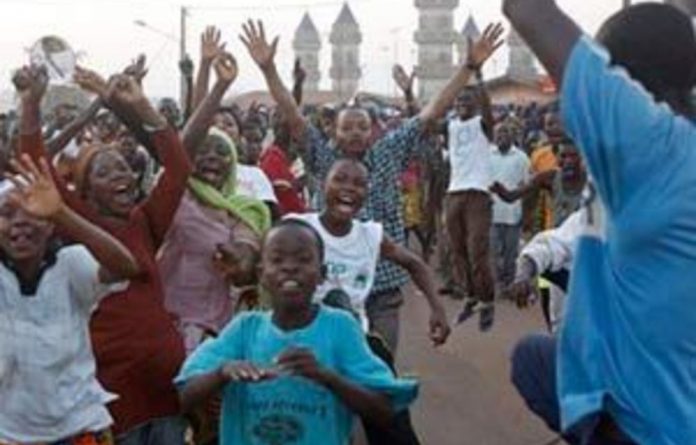 Côte d’Ivoire was in lockdown on Friday with ports, borders, and airports sealed and foreign broadcasts jammed as President Laurent Gbagbo’s allies rejected election results that showed him beaten by his rival.

World powers sharpened their warnings to Ivorian leaders to settle the dispute peacefully, but the chaos in the West African state deepened after days of bloodshed and fraud allegations that have disrupted the landmark vote.

“The land, air and sea borders are closed to all movement of people and goods from this Thursday at 8pm GMT until further notice,” the army said in a declaration on state television.

Shortly afterwards foreign television news channels including France 24 and CNN as well as Radio France International went off the air in Côte d’Ivoire. An official statement said this was to “keep the peace”.

Authorities had ordered “the immediate suspension of all foreign news channels” carried by the Canal+ Horizon network, which provides all such broadcasts available in Côte d’Ivoire, the statement said.

Earlier, the electoral commission (CEI) had announced that provisional results showed opposition leader Alassane Ouattara had beaten Gbagbo in the disputed polls by 54% to 46%.

But top Gbagbo ally Paul Yao N’Dre, the head of the country’s Constitutional Council which has the final say on elections, said the results were invalid since the commission had over-run the legal deadline for releasing its results.

A United Nations Security Council statement said after an emergency meeting that its members “reiterated their readiness to take the appropriate measures against those who obstruct the electoral process” — a veiled threat of sanctions.

Ouattara has accused Gbagbo of trying to cling to power by blocking the results of the election, which has been marred by bloodshed.

“When the gendarmes arrived, they encircled the headquarters and started firing wildly,” said one of the wounded, Amidou Traore, lying bandaged in an Abidjan hospital.

The army confirmed the incident but said it had come under fire first and that it had retaliated, killing four. Gbagbo supporters said on one of its offices nearby was also attacked and two people injured.

Ouattara called on his “brother” Gbagbo to accept the result, promising to form a unity government and “bring together the nation in the values of peace, forgiveness, reconciliation and union”.

The polls aim to end a decade of instability in Côte d’Ivoire, the world’s top cocoa producer and formerly West Africa’s most prosperous country.

It was shaken by a coup in 1999 and split in two when rebels of the New Forces took control of the north, Ouattara’s homeland, after a foiled coup against Gbagbo in 2002.

The results were delayed amid accusations of cheating by both sides, though the UN mission said the election was sound overall.

Amid the tension the commission unexpectedly broke its silence Thursday, crowning Ouattara, a former IMF executive and bitter rival of Gbagbo. The president has been in power for a decade despite his term ending in 2005.

Yao N’Dre retorted that commission had “missed its deadline for giving provisional results” by midnight Wednesday. “From that moment, the CEI is not in a position to announce anything.”

Troops were deployed around the main city of Abidjan and Gbagbo has extended a curfew, in place since the eve of the election, until Sunday.

French President Nicolas Sarkozy called for a peaceful settlement and the Washington reiterated its call for the results to be respected.

“Credible, accredited electoral observers have characterised the balloting as free and fair, and no party should be allowed to obstruct further the electoral process,” White House official Mike Hammer said in a statement.

The International Criminal Court in The Hague also said it was monitoring the situation. — AFP

Allegations of racism against the Capitol Police are nothing new: Over 250 Black cops have sued the department since 2001. Some of those former officers now say it’s no surprise white nationalists were able to storm the building
Advertising