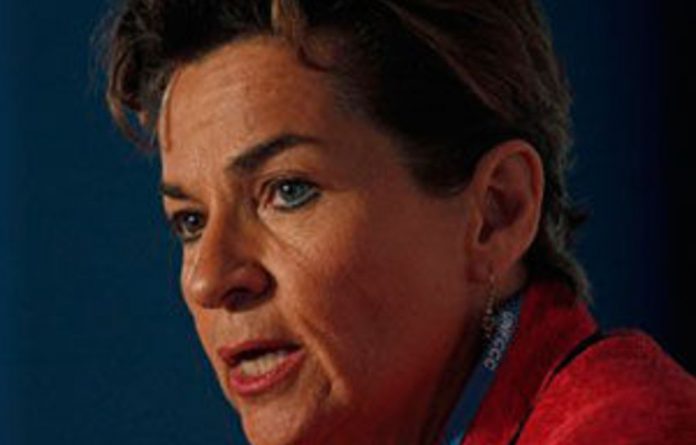 China’s target would still be voluntary, stressed China’s chief negotiator, Xie Zhenhua, a distinction from developed nation targets under Kyoto: “Developing countries can … make their own voluntary emissions commitments and these should be under the Convention.”

The November 29 to December 10 talks in Mexico’s Cancún beach resort are split over how to harden existing pledges made at last year’s Copenhagen summit, which ended in a brief, non-binding agreement.

China’s offer to make its existing, domestic pledge to slow growth in carbon emissions binding under a UN resolution is a compromise it hopes will encourage developed countries to continue the existing Kyoto Protocol.

“We can create a resolution and that resolution can be binding on China,” said Huang Huikang, the Chinese Foreign Ministry’s envoy for climate change talks.

“Under the [UN climate] convention, we can even have a legally binding decision. We can discuss the specific form. We can make our efforts a part of international efforts.”

‘Promising development’
Developing nations want to continue the first, 2008 to 2012 round of Kyoto, which binds the emissions of nearly 40 developed countries, while industrialised backers, including Japan, Russia and Canada, want a separate agreement regulating all nations.

Analysts were positive about China’s proposal: “This is a game-changer,” said Jennifer Morgan from the Washington-based World Resources Institute.

“The devil is in the details but this is a promising development,” said Alden Meyer from the US-based Union of Concerned Scientists.

Bolivia said on Monday that the policies of rich nations were tantamount to genocide, signalling no compromise on its demands that are the most radical of any in Cancún. The UN talks can only pass decisions by consensus.

About 300 000 people a year were dying from natural disasters such as floods, droughts and storms, said Bolivia’s head of delegation, Pablo Solon.

“Is that not talking about genocide?” he asked, linking the deaths to US Congress, which is unlikely to pass a climate Bill soon following a swing to the Republicans last month.

Solon defended Bolivia’s goal of limiting warming to one degree Celsius above pre-industrial times, the world’s strictest goal. Temperatures have already risen by about 0,8 degrees and the UN climate panel says that they will almost inevitably gain another 0,6.

“I have to say that we are concerned because the texts are not ready to be used by ministers to finalise,” said EU climate commissioner Connie Hedegaard.

The Cancún talks were nearing agreement to launch long-term climate aid for developing countries, as well as schemes to protect rainforests and share low-carbon technologies, but ministers would likely delay detail until next year, and those deals may hinge on agreement on whether to extend Kyoto.

The outlines of a deal were taking shape, said the head of the US delegation, Todd Stern.

“I think there is an agreement to be had. But I’m not sure we will get it. That question remains in the balance.”

Failure in Cancún may call into question the role of the United Nations in brokering a shift to a low-carbon global economy, and leave carbon markets in the lurch after 2012. — Reuters