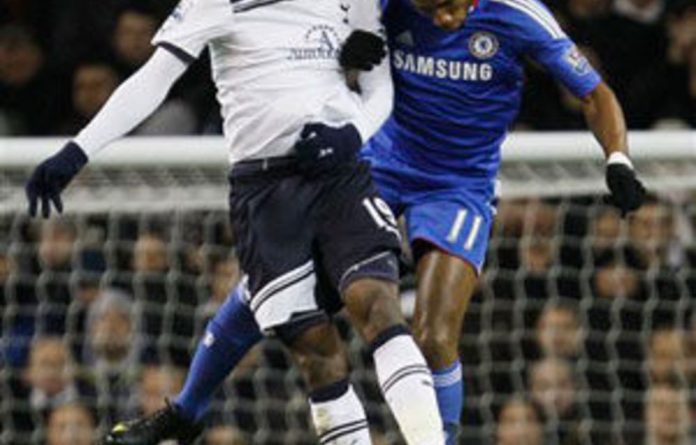 Chelsea missed the chance to go top in the English Premier League after Didier Drogba saw a late penalty saved in a 1-1 draw away to Tottenham Hotspur at White Hart Lane on Sunday.

But the Brazilian then produced a fine save to deny Drogba, who took the spot-kick even though fellow substitute and regular penalty-taker Frank Lampard was on the field.

Had the penalty gone in and Chelsea won, the Blues would have gone top.

Instead they stayed fourth, level on points with Manchester United who clash with leaders Arsenal at Old Trafford on Monday.

Equaliser by Drogba
Tottenham opened the scoring in the 15th minute when the unchallenged Roman Pavlyuchenko struck from inside the box after a pass from Jermain Defoe.

Drogba, on at the start of the second half, equalised 20 minutes from time when his shot somehow found a way through Gomes’s hands to set-up the game’s dramatic finale as Spurs regained fifth spot from Bolton, who beat Blackburn Rovers 2-1 earlier Sunday.
“I thought we deserved to win the game, especially in the second half, we dominated,” Chelsea captain John Terry told Sky Sports after the Blues avoided a fifth defeat in nine Games.

Turning to Drogba’s penalty miss, Terry said: “It wasn’t mentioned (who would take the penalty). Didier was brave enough to stand up and take it. You score some, you miss some.”

Terry was optimistic Chelsea had turned a corner in their stuttering season, saying: “We’ve got two huge games now. We’ve got Man United at the Bridge and then we go to the Emirates (to play Arsenal).

‘Nobody’s playing particularly well’
“I’ve never doubted my players, the manager or the football club. We won the double last year, let’s not forget that.

“If we can do that over the Christmas period, we’ve got a very good chance.”

Diouf cancelled out a 63rd-minute opener from Fabrice Muamba for Bolton who had Mark Davies sent off after 54 minutes for a second bookable offence.

Disappointed Rovers manager
“I know I’ve got spirit in that dressing room and it was so evident again there, to take the blow of the equaliser and then come back and score such a wonderful goal,” said Bolton boss Owen Coyle.

Disappointed Rovers manager Sam Allardyce said his side had defended “like a bunch of old women” and added: “We have thrown away the chance of more points”.

In Sunday’s other match Wolves clinched a crucial 1-0 win over Birmingham with their first clean sheet since April.

Stephen Hunt’s near-post finish on the stroke of half-time was the only effort to beat England international goalkeeper Ben Foster who put in another sublime performance to keep the hosts at bay at Molineux.

Despite the win, Wolves stayed second from bottom.

“I’ve been delighted by the team’s spirit and performances every week but today we got a result,” said Wolves manager Mick McCarthy.

Birmingham boss Alex McLeish added: “We left a lot of our talking in the dressing room. Wolves deserved the victory.” — AFP