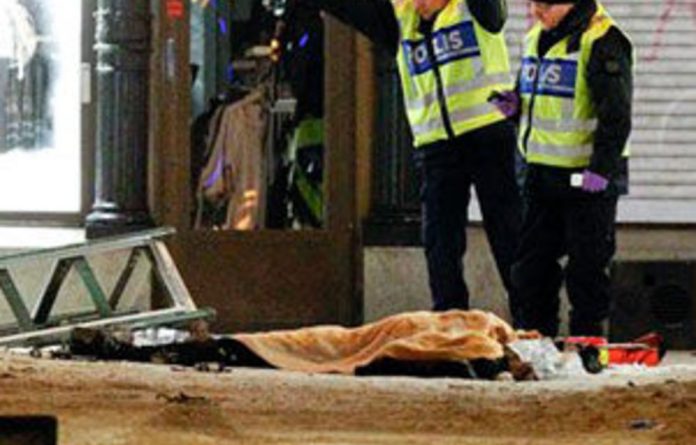 No one died except the suspected bomber, but two explosions in Sweden’s capital tore at the fabric of this tolerant nation — a society that hadn’t seen a terrorist attack in more than three decades.

Two people were wounded in central Stockholm on Saturday in what appeared to be the first suicide bombing in the history of Sweden, which has been spared the major terrorist strikes seen in several other European countries.

A car exploded in the middle of the seasonal shopping frenzy, shooting flames and causing several smaller blasts as people ran screaming from the scene. The blast that killed the alleged bomber came moments later further a few blocks away from the car explosion on a busy pedestrian street.

Experts said the alleged bomber probably didn’t succeed in detonating all the explosives and could have caused much greater damage.

While police haven’t confirmed Saturday’s attack was motivated by Islamist views, an audio file sent to Swedish news agency TT shortly before the blast referred to jihad, Sweden’s military presence in Afghanistan and a cartoon by a Swedish artist that depicted the Prophet Muhammad as a dog, enraging many Muslims.

It hasn’t been verified that the speaker is the person who set off the explosive, but police have said they are investigating that possibility.

‘We are a reality’
“Now the Islamic state has been created. We now exist here in Europe and in Sweden. We are a reality,” the voice said in the file. “I don’t want to say more about this. Our actions will speak for themselves.”

Swedish Prime Minister Fredrik Reinfeldt on Sunday said the attack was “unacceptable” but urged Swedes not to jump to “premature conclusions” that “create tension which paints pictures that are then difficult to change”.

“Sweden is an open society … which has stated a wish that people should be able to have different backgrounds, believe in different in gods … and live side by side in our open society,” Reinfeldt said at a news conference.

Swedes, with a tradition of welcoming immigrants and a culture of transparency, began questioning the veracity of their self-image of being a secure nation after the 1986 murder of Prime Minister Olof Palme. In 2003, the fatal stabbing of Foreign Minister Anna Lindh in a department store was a wake-up call for many.

But there have been no major terrorist strikes.

“We had a terrorist attack in the 1970s from the Rote Armee Friktion of Germany, but if this is a suicide bomber it is the first time in Sweden,” security police spokesperson Anders Thornberg said. “It’s very serious and it’s very tragic that these things have come to Sweden too.”

Public reaction
On Sunday, the pedestrian district where the explosions occurred was eerily quiet and empty for a mid-December weekend.

“We’re used to seeing things like this on the news. This was a lot closer to home but it still doesn’t feel very tangible,” said Eric Osterman, a 26-year-old student.

German tourist Melanie Ziethmann, 34, said she heard the bang of the explosion on Saturday but didn’t realize what it was until a friend in Germany contacted her to make sure she was OK.

“We were surprised that this happened in Sweden,” Ziethmann said. “It was quite shocking. I thought it was very safe here.”

In October, Sweden raised its terror threat alert level from low to elevated because of what police called “a shift in activities” among Swedish-based groups that could be plotting attacks.

Days later, police made several arrests over an alleged bomb plot in the country’s second-largest city, Goteborg. The suspects were later released and police said the city was no longer deemed to be under threat.

A matter of time
Magnus Norell, a terrorism expert at the Swedish Defense Research Agency, said it was just a matter of time before Sweden was hit by a terror attack.

“Sweden isn’t an isolated island, even if we might think that sometimes,” he said. “We have only been lucky so far.”

Norell said Sweden has the same problem with worsening radicalization among Islamic groups as other countries, with young men travelling to training camps in countries such as Somalia and Pakistan.

“The whole idea is that this is a global war for them and that the target exists everywhere, all over the world,” he said.

The 2007 drawing of the Prophet Muhammad by Lars Vilks has raised tensions before in Sweden. In May, Vilks was assaulted while giving a speech in Uppsala, and vandals unsuccessfully tried to burn down his home in southern Sweden.

Tension over immigration also has been growing in this nation of 9,4 million. Sweden attracted more Iraqi refugees following the United States toppling of Saddam Hussein than any other country in the West, but calls for restrictions have increased in recent years and in September the far-right Sweden Democrats entered Parliament for the first time, winning 20 of the 349 seats.

Response from Muslim community
On Sunday, about 100 people assembled in chilly central Stockholm for a peaceful demonstration organized by Swedish Muslims for Peace and Justice.

“We felt a responsibility to sharply condemn the attack, but it would be naive to think that yesterday’s events aren’t going to have a negative effect on the perception of Muslims in Sweden,” said Samaa Sarsour, 26, one of the main organizers of the rally. She urged the crowd to punch the air and kick out their feet in a display of defiance against the hijacking of religion by extremists.

Saturday’s blast could have been disastrous if the car explosions had set off gas canisters inside the vehicle.

“We were really blessed there. Something must have gone wrong, because it is a fairly normal way of arming a car to get maximum destructive effect,” Norell said. Had it succeeded, it could have injured people “in all possible directions,” he said. — AP