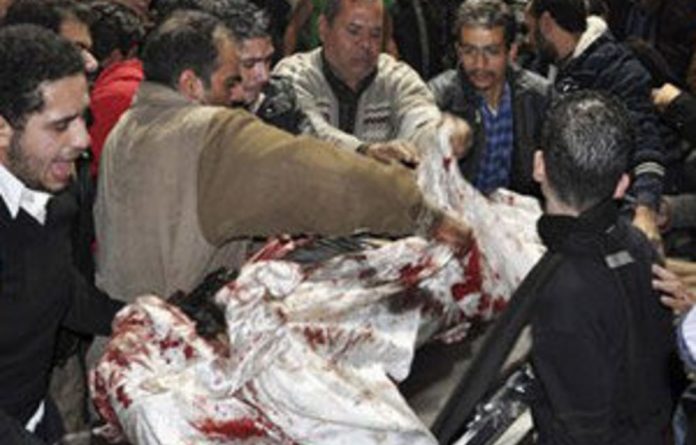 A car bombing outside a church killed 21 people in Egypt’s northern city of Alexandria as worshippers gathered to mark the New Year, security and medical sources said on Saturday.

The Interior Ministry earlier said 24 people were also wounded in the bombing, which prompted hundreds of Christians to take to the streets in protest. Some Christians and Muslims pelted each other with rocks, a witness said. Cars were torched.

Christians in Muslim-majority Egypt make up about 10% of the nation’s 79-million people.

Egypt, due to hold a presidential election in September, has stepped up security around churches, restricting cars from parking directly outside them, after an al-Qaeda-linked group in Iraq issued a threat against the church in Egypt in November.

The al-Qaeda-linked Islamic State of Iraq, which claimed an attack on a church in Baghdad in November, threatened the Egyptian church over its treatment of women the group said the church was holding after they had converted to Islam.

“This is a scene from Baghdad,” a witness told Reuters by telephone.

Police used teargas to disperse the crowd on the streets. Ambulances were also at the scene where medical personnel gathered body parts that were scattered over the area.

“We sacrifice our souls and blood for the cross,” shouted protesting Christians near the Coptic Orthodox church where the blast struck, a witness said.

Service
A statement from the Interior Ministry said the blast occurred just after midnight in front of the church after a service to mark the New Year. It said the blast damaged a mosque near the church and eight Muslims were among the 24 wounded.

The ministry said an investigation had begun.

“The preliminary investigation indicates that a car was the reason behind the explosion. It was parked in front of the church and had been assumed to belong to one of the people who often come to the church,” said the ministry statement, which was read to Reuters by a ministry official.

Kameel Sadeeq, from the Coptic council in Alexandria, told Reuters: “People went in to church to pray to God but ended up as scattered limbs. This massacre has al-Qaeda written all over, the same pattern Qaeda has adopted in other countries.”

In November, hundreds of Christians clashed with riot police, as well as some Muslims who joined in, during a protest over a decision to halt construction of a church. Officials said the church did not have a licence to be built.

Two Christians died as a result of those clashes and dozens were hurt, medical sources said. More than 150 were detained.

Analysts say the state must address grievances such as those over laws making it easier to build a mosque than a church if it wants to stem such sectarian violence.

Officials are swift to play down sectarian differences and are particularly sensitive to emphasise national harmony after a a parliamentary election in November that opposition groups said was rigged and before the presidential poll.

President Hosni Mubarak (82) and in power since 1981, is expected to run again, if he is able. Gallbladder surgery last March rekindle questions about his health, although he has returned to a full schedule. – Reuters