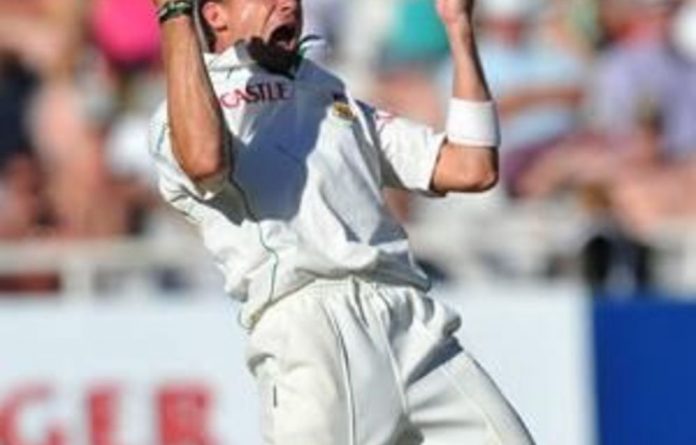 Sachin Tendulkar and Dale Steyn fought out a titanic battle before India took a two-run first-innings lead on the third day of the third and final Test against South Africa at Newlands on Tuesday.

Tendulkar, Test cricket’s all-time leading run-scorer, made 146 in an Indian total of 364, while Steyn, the world’s number one fast bowler, took 5-75.

By the close, South Africa had reached 52-2 in their second innings to be 50 runs ahead with eight wickets standing. South Africa captain Graeme Smith was trapped leg before wicket by off-spinner Harbhajan Singh for 29 shortly before the close and was quickly followed by nightwatchman Paul Harris.

With the series between the world’s two leading Test nations locked at one-all, it may take something special from one of the two sides to force a result during the remaining two days.

That something special was what Tendulkar and Steyn produced for 16 000 enthralled spectators.

“It was a great day for Test cricket,” said Harbhajan. “Sachin got another brilliant hundred and Steyn bowled brilliantly. You can’t ask for more.”

Fast bowling and slow runs
It was not one of Tendulkar’s most fluent innings. Indeed, Steyn beat his bat several times during two blistering spells against the master batsman. But Tendulkar never lost his composure as he battled to his 51st Test century on a pitch that always offered some assistance to the bowlers.

Only two other batsmen made scores of any significance. Opening batsman Gautam Gambhir struggled to 93 and shared a third-wicket stand of 176 with Tendulkar, while Harbhajan Singh was typically unorthodox as he hit 40 and put on 76 for the seventh wicket with Tendulkar.

Steyn was magnificent, bowling at high pace and getting late away swing, although he had no luck in his first spell of the day. He bowled five overs, all to Tendulkar, had an appeal for a catch behind turned down and conceded 10 runs, six of which were off the edge of the bat while Tendulkar managed one sumptuous cover drive for four.

Steyn had an even better spell with the second new ball, taking two wickets for three runs in six hostile overs. He dismissed Cheteshwar Pujara and Mahendra Singh Dhoni to reduce India to a precarious 247-6 and had concerted appeals for catches against Tendulkar and Harbhajan turned down.

Umpire Ian Gould rejected both appeals, which came during the space of four balls, and television replays indicated he was correct both times.

Steyn seemed furious when the appeal against Harbhajan was turned down but it appeared the ball deflected off the off stump at high pace, remarkably without disturbing a bail.

“I heard a nick but I was sure it was not off my bat,” said Harbhajan.

Prayers to the cricketing gods
Steyn said of his 16th five-wicket haul in Tests: “It was more fulfilling because [injured Jacques] Kallis wasn’t there. To bowl 30 overs in that heat is quite tough so to get the reward is great, although the job is only half done.”

Steyn said South Africa’s first objective was to make enough runs to make sure they couldn’t lose. Then the bowlers would hope for better luck in the second innings.

“Hopefully the cricketing gods will smile on us. We may even get some wickets with bad balls.”

Tendulkar’s innings lasted for 465 minutes. He faced 313 balls and hit 17 fours and two sixes. When he eventually fell it was to Morne Morkel, Steyn’s fast bowling partner, who had been largely unimpressive up to that point. But Morkel produced a superb delivery, which slanted in to Tendulkar and straightened just enough to beat the bat and hit the top of the off stump.

Tendulkar was eighth man out with the total on 341. Zaheer Khan hit 23 off 22 balls, including two sixes, to take India into the lead, before he top-edged another attempted big hit against Morkel and was caught on the boundary almost behind the wicketkeeper.

South Africa’s innings started with 85 minutes still remaining in the day, but only 16 overs were bowled. Khan and Smith both needed treatment on the field and there was a hold-up because Shanthakumaran Sreesanth, anointed by the crowd as India’s villain, alleged he was being abused by spectators on the third-man boundary. — AFP