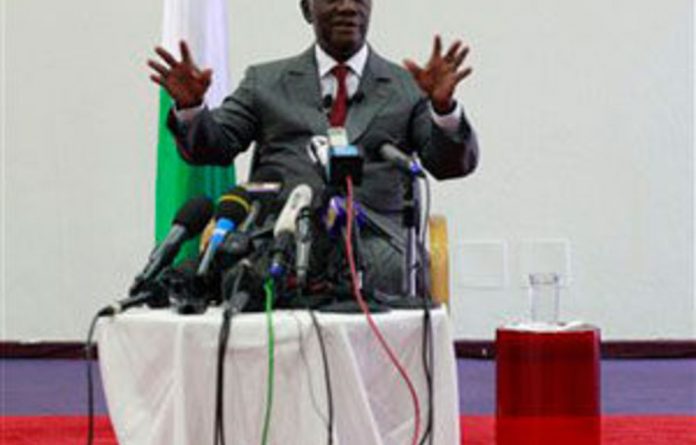 Côte d’Ivoire strongman Laurent Gbagbo’s stand-off with the world intensified on Friday after Britain and Canada rejected his expulsion of their envoys, insisting they only recognise his rival.

Gbagbo’s increasingly isolated government said late on Thursday that the two ambassadors were no longer welcome, but both countries reiterated that they only recognised statements made by his rival, Alassane Ouattara.

Ouattara is the internationally recognised winner of a November 28 presidential run-off, but he has been holed up in an Abidjan hotel for weeks, surrounded by the Ivorian army that remains loyal to Gbagbo.

Ouattara himself has called for a “non-violent operation” by West African special forces to snatch Gbagbo and thus head off the threat of civil war.

Regional leaders have said they could carry out an armed intervention if mediation efforts fail.

Westcott has responsibility for several West African nations and is currently in Ghana, while Massip remains in Côte d’Ivoire, a source at the Canadian embassy said, insisting it was “business as usual”.

Gbagbo’s spokesperson had said that her diplomatic privileges and immunity would remain in place until she left or “until a reasonable amount of time had passed” for her to leave.

London and Ottawa said late last month that they no longer recognised ambassadors appointed by Gbagbo and that they would only accredit new envoys named by Ouattara.

Former colonial power France, which has a much larger diplomatic mission in Abidjan, has also said it no longer recognises Gbagbo’s ambassador but Paris’s envoy remains in place in Côte d’Ivoire’s commercial capital.

The Foreign Office in London said Britain “does not accept the validity of statements made by” anyone other than Ouattara.

Canadian Foreign Minister Lawrence Cannon said that Canada “does not recognise Laurent Gbagbo’s claim to government. As such, his request is illegitimate.”

Ouattara is protected at the besieged Golf Hotel by about 800 UN peacekeepers as well as the ex-rebel New Forces allied with his camp since troops shot dead several of his supporters on December 16.

The latest bid by the Economic Community of West African States (Ecowas) regional bloc and the African Union to mediate an end to the crisis that has seen at least 210 people killed floundered on Tuesday.

Assets freeze
With a United States travel ban and European Union sanctions already on Gbagbo and his entourage, Washington on Thursday froze his US assets as well as those of his wife, Simone, and three of their inner circle.

Côte d’Ivoire’s Independent Electoral Commission as well as the United Nations declared Ouattara the winner of the November 28 run-off poll, while the Constitutional Council said that Gbagbo won.

Both men have been sworn in as president and Gbagbo claims there is an international plot to depose him after more than a decade in power.

But Gbagbo’s refusal to bow to international pressure has sent more than 22 000 Ivorians fleeing the country amid fears of the return of civil war.

UN peacekeeping chief Alain Le Roy has said he will seek an extra 1 000 to 2 000 reinforcements for the more than 9 500-strong mission in coming days.

Gbagbo has turned down offers of exile and amnesty for him and his camp in different countries. — AFP