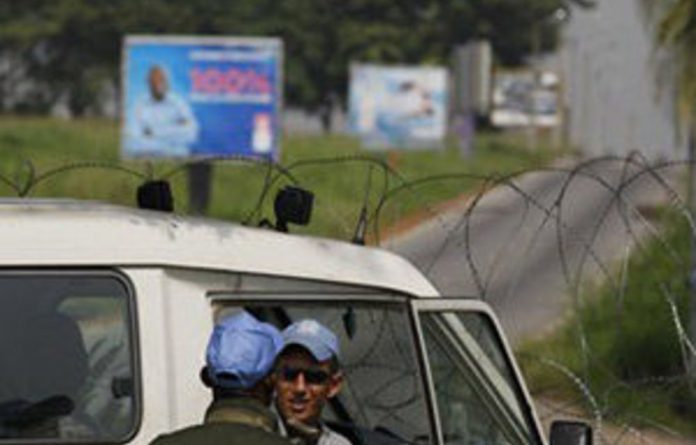 The exuberant chatter that followed election night has all but disappeared. Today a handful of loyalists wearing white campaign T-shirts slump in chairs. Two French gendarmes in navy blue polo shirts stand near the bookshop to exchange greetings in hushed tones.

Outside, the garden resembles a military campsite with tents, camp beds and white UN military trucks. Peacekeepers are on constant alert amid threats that an armed mob will storm the building. Their mission: to protect a government-anxiously-in-waiting.

Welcome to the Golf in Abidjan, Côte d’Ivoire, currently the most surreal hotel in the world. Would-be guests who attempt to sample its five-star luxuries are likely to be threatened at gunpoint. Current residents might be reminded of a lyric from the Eagles’ Hotel California: “You can check out any time you like, but you can never leave.”

This is the improbable headquarters of Alassane Ouattara, the internationally recognised winner of November’s presidential election. Normally the 300-room hotel is used by business people and the occasional tourist, and for wedding parties and company meetings. Now it is in the eye of a storm that could sweep Côte d’Ivoire into another civil war.

It was in a conference room here that Ouattara’s victory was announced by the chairperson of the electoral commission, Youssouf Bakayoko, after he had been prevented from announcing the results on state television.

Wave of terror
A jubilant crowd sang the national anthem in the lobby as scores of well-wishers poured into the parking lot. But the joy turned sour when incumbent president, Laurent Gbagbo, refused to accept defeat and, according to Ouattara and the UN, unleashed a wave of terror that has left more than 200 people dead. He also effectively turned the Golf hotel into a prison, surrounding it with his security forces so Ouattara cannot leave and food supplies have to be airlifted in by UN helicopter.

Many among the 200-plus hotel staff still go home at night, negotiating a way past the military. But none of the senior opposition figures consider leaving — not even if the roadblocks are lifted. “I don’t feel safe at home as long as Gbagbo remains in power,” said an opposition spokesperson.

Ouattara holds cabinet meetings in an airconditioned tent on a football field adjacent to the hotel. He has also been giving interviews and hosting press conferences with journalists flown in by UN helicopters.

This week, a day after Gbagbo promised to lift the blockade around the Golf, the road to the waterfront hotel was still blocked by a tree trunk, a wooden signboard, and four armed soldiers, including a soldier with a machine gun at the hips and string of bullets around the neck.

“We can’t let you go through,” they said. “Those are the instructions we have been given.” The Guardian went by car — a small convoy of two UN buses and a UN jeep. After about 30 minutes, the military waved it through.

Ouattara, looking tired, spoke to the press from the conference room of the hotel. He sat on a black leather chair behind a low coffee table. The Ivorian flag was positioned close to the chair. He was announced as: “His Excellency Alassane Ouattara, the president of the republic.”

Empty promises
The military roadblock was symbolic of Gbagbo’s empty promises, Ouattara said. He called Gbagbo “a liar”. “Mr Gbagbo has no credibility — he announced he was going to lift the blockade. Well, here is someone who is always ready to make promises he won’t keep.”

Ouattara and his wife occupy a luxury suite at the hotel. Some senior officials exercise by taking brisk walks around the compound every morning. As dusk sets in, soldiers get together for a game of football or basketball.

The Golf hotel takes its name from the golf club across the road, a lush and meticulously maintained course that was created by the country’s first president, Félix Houphouët-Boigny, who tried to promote golf as a popular sport.

The hotel has a history of accommodating opposition supporters. Côte d’Ivoire has been split in a government-run south and a rebel-held north since 2002. A year later, the first in long series of peace deals was signed, and several opposition figures and rebel leaders moved to Abidjan to use the hotel as their base because of its geographical position.

Some people had already lived at the Golf hotel for more than two years before moving back in last month. Amadou Coulibaly, an aide to Ouattara, said he wasn’t looking forward to being holed up again. “My house is less than a kilometre away from here,” he said. “And yet I can’t even go out to fetch a fresh change of clothes.”

In 2004, the French army used the hotel as a gathering point for expatriates fleeing a violent anti-French looting spree by Gbagbo supporters. Military beach landing crafts shipped out hundreds of Europeans via the lagoon.

Water and electricity are still working at the Golf, though no one can be sure if Gbagbo will cut them off. For now the waiting game goes on, with hopes pinned on international pressure among residents of what feels like the world’s smallest republic. – guardian.co.uk