‘Wikiplane’ a flight of fancy 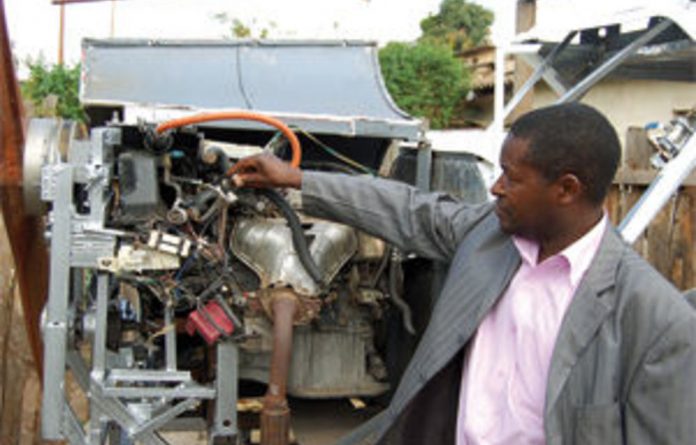 Using the engine of a Toyota Corolla, the wheels of a Mini, instructions downloaded from Wikipedia and a professed grasp of the lift equation, the 42-year-old IT engineer has built his own aircraft.

It stands in pieces in his tiny front yard on the outskirts of Nairobi — the bright yellow cockpit in the driveway, the red and blue tail on the grass among his children’s bi­cycles, a water tank, a washing line, spinach plants, welding machines, power drills and empty paint tins.

Several mahogany propellers stand next to his front door, while the plane’s aluminium wings, too long to fit in his garden, lie beside the road outside the front gate.

“In two months we’ll be ready,” Nderitu said recently, as two of his assistants tinkered with the engine. “Pray for us.”

Amani Imani, “Peace Faith” in Kiswahili, as Nderitu has christened his collapsible two-seater propeller plane, has attracted great interest and excitement from the Kenyan public.

In a poll that followed a news item about his quest to fly, about 70% of viewers said they believed his plane would take off. But Kenya’s Civil Aviation Authority proved less enthusiastic, serving Nderitu with a letter last week from the “Manager Airworthiness”, ordering him to “refrain from further construction or development”. But having sunk £5 000 and countless hours in the venture Nderitu is determined to push onwards and — with luck — upwards, citing inspiration from the pioneers of modern flight.

“Look at the struggles the Wright brothers went through. They had no predecessors and the really amazing thing was that they built their own engine. What I am doing bears no comparison in terms of difficulty.”

Not just a dream
Nderitu traces his enthusiasm for aviation to his schooldays, when he read in the Encyclopaedia Britannica about the attempts at early flight. At university he studied physics, and then moved into computer hardware.

Two years ago, having saved some money, he decided to try to realise his dream of building a plane.

“I read up on the mechanics and science of flight on the internet, downloading about 2GB of information. Mostly I used Wikipedia — it gives you all the specs. That’s the good thing.”

Then, last June, he started acquiring the materials. From a United States aircraft company he ordered a compass and meters to measure airspeed, vertical speed and altitude. He bought steel tubing to build the frame, and sheets of aluminium for the wings and outer skin.

Automobile spare parts helped too — besides the engine and wheels, he used a car exhaust pipe, braking system and battery. A modified handbrake serves as the accelerator.

He designed the plane to be collapsible, since his yard is so small, but said it could be assembled in 20 minutes.

It is not light. Measuring each piece separately using a bathroom and a butcher’s scale, he estimates the weight to be 800kg. But he says the 9,5 metre wingspan and the engine’s power should be sufficient for a lift-off.

Earlier this month, he loaded the parts on a truck and undertook a ground test run. After 15 metres, the rear landing gear collapsed, but Nderitu said the problem was easily solved.

There are still other questions, though, such as who will conduct the test flight if the authorities ever let it take place. In the early stages of building, Nderitu bought a copy of The Pilot’s Handbook of Aeronautical Knowledge, published by the US Federal Aviation Authority, on Amazon. But he says it will not be him in the cockpit.

“I am not so ignorant as to think that reading about piloting and actual piloting are the same thing. I have to find someone who is qualified.”

Whatever the outcome, Nderitu said he was happy simply trying to realise his dream — and hopefully inspiring other people on the continent.

“In the West they are sending people into space. In Africa we are still struggling for good roads. Without trying bigger things, we will never get anywhere.” — Guardian News & Media 2010