US again urges North Korea to meet its obligations 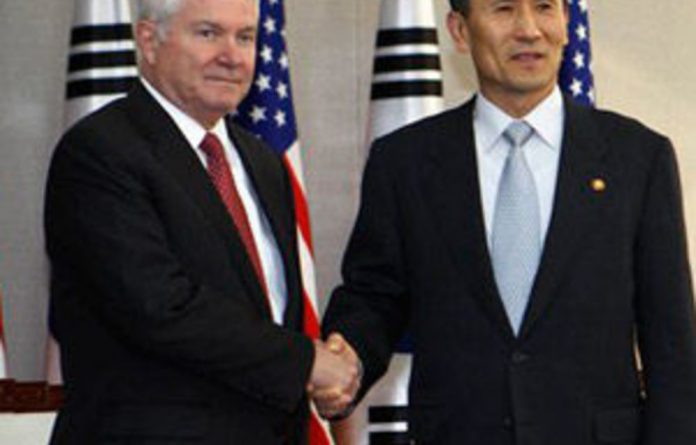 US Defence Secretary Robert Gates on Friday held out the possibility of a resumption of six-party talks if North Korea ceases provocations and meets international obligations, but said there was no sign of it changing its ways.

Gates was wrapping up a five-day visit to north-east Asia with talks in Seoul to discuss ways to respond to Pyongyang’s “belligerence” last year which drove tensions to their highest level in years.

“With regards to next steps on North Korea, diplomatic engagement is possible, starting with direct engagement between the DPRK and the South,” he told reporters in Seoul, referring to the North Korea by its acronym.

“When or if North Korea’s actions show cause to believe that negotiations can be productive and conducted in good faith, then we could see a return to the six-party talks.

The North has appealed almost daily for talks since the start of the year, but Gates has called on Pyongyang to make concrete gestures that it is serious about negotiations.

Seoul has dismissed Pyongyang’s peace overtures as “insincere” and “propaganda”. It has demanded talks focused on what it says was North Korea’s sinking of one of its warships in March, which killed 46 sailors, and its attack on one of its islands in November, which killed four people.

North Korea said it was South Korean provocation, a live-fire drill from the island of Yeonpyeong into disputed waters, that prompted its retaliation. It has denied responsibility for the sinking of the naval vessel.

Both the United States and South Korea say the North must also follow through on its pledges to denuclearise, and say its revelations of a uranium enrichment programme — which gives it a second route to make nuclear bomb — show it is insincere.

Gates said earlier in Tokyo that despite the best efforts of South Korea and the international community “the character and priorities of the North Korean regime have sadly not changed”.

Gates repeated his concerns about the North Korea threat reaching far beyond the peninsula, highlighting proliferation worries about its nuclear and missile programmes.

He said that while North Korea’s ability to launch a conventional ground invasion “is much degraded from even a decade or so ago … in other respects it has grown more lethal and destabilising”.

Gates earlier this week warned that Pyongyang was becoming a direct threat to the United States and could develop inter-continental ballistic missiles within five years.