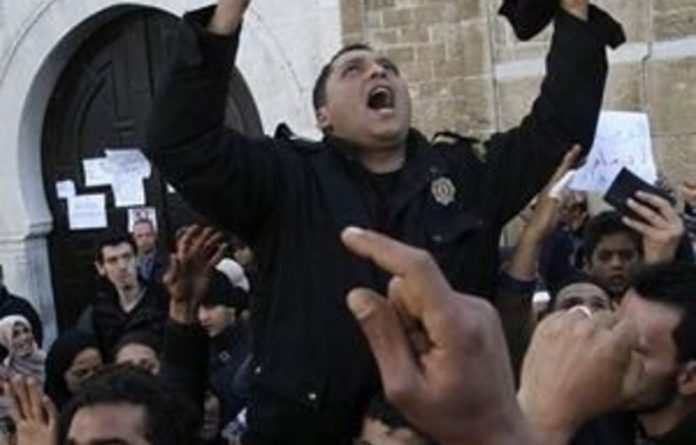 Tunisian protesters demanded the departure of the embattled prime minister on Saturday, and an investigator promised to uncover the interior ministry’s role in this month’s shooting of scores of unarmed demonstrators.

Emboldened by their overthrow of the president a week ago in a “Jasmine Revolution”, marchers took to the streets to try to force out his lieutenants.

Not satisfied with his pledge to quit once free elections can be held, hundreds surged past a half-hearted police cordon at the office of Prime Minister Mohamed Ghannouchi. One banner read: “No place for men of tyranny in a unity government.”

Ghannouchi, who stayed on to head a would-be unity coalition after strongman Zine al-Abidine Ben Ali fled on January 14, made an emotional late-night plea for patience on television on Friday. He portrayed himself as a fellow victim and pledged to end his political career as soon as he could organise elections.

But as he met Cabinet colleagues on Saturday, thousands — including many policemen — took to the streets of Tunis and other towns to keep up the protest momentum and reject what many deride as Ghannouchi’s token attempt to co-opt a handful of little-known dissidents into his government.

One demonstrator outside the premier’s office said: “We want to tell Mr Ghannouchi the definition of ‘revolution’ — it means a radical change, not keeping on the same prime minister.”

The toppling of an authoritarian ruler by waves of street protests has transfixed Arabs across North Africa and the Middle East. The underlying problems of unemployment and corrupt rule are common across the region, and its leaders — many supported by Western powers as bulwarks against radical Islam — are watching anxiously as events in Tunisia unfold.

In neighbouring Algeria, still scarred by an Islamist revolt in the 1990s against the ruling party, police used batons on Saturday to stop a gathering by an opposition group.

In Saudi Arabia, a man burned himself to death. It was not clear if he was, like numerous others in Egypt and elsewhere, inspired by the self-immolation of a Tunisian vegetable seller whose desperate act last month launched the wave of protests.

In Tunis, a man died after setting himself on fire outside a telephone company. It was not clear what his motive was.

The heads of three commissions established by Tunisia’s interim government this week said they would overhaul the country’s laws and examine the interior ministry’s role in the shooting of protesters.

“We saw in some cases shots had been directed to the head or to the chest … We will look into the reason those who held guns or knives struck those with empty hands who called for bread and freedom,” said Taoufik Bouderbala, head of the National Commission to Investigate Abuses.

“We will accuse no one. We will check the facts… but we will ask who gave permission to those who opened fire?”

Tunisia’s interior minister has given a death toll of 78 since the start of the demonstrations, but the UN High Commissioner for Human Rights put the number at 117, including 70 killed by live fire.

It is unclear when elections for president and parliament might be held. But leaders of secular and Islamist opposition groups, harshly repressed under Ben Ali’s rule, are rushing to re-enter the political fray.

Rached Ghannouchi, exiled leader of the banned Islamist Ennahda (Renaissance) movement, told al-Jazeera his movement supported the democratic trend and should not be feared: “We are a moderate Islamic movement, a democratic movement based on democratic ideals in … Islamic culture,” he said.

Moncef Marzouki, a secular dissident who returned from exile in Paris and hopes to run for president, urged the appointment of a new, independent prime minister. He said premier Ghannouchi’s presence was hampering, not helping, efforts to restore stability.

But mindful of the dozens of deaths this month and of the thirst for retribution against Ben Ali’s clan and the organs of his police state, Marzouki urged those in the streets to stay calm.

“The great thing is that this revolution has been peaceful,” he said. “Please continue this way and don’t get into revenge.”

Even policemen, once the feared blunt instrument of Ben Ali’s 24-year rule, were declaring changed loyalties. In Tunis thousands joined in a chant of “We are innocent of the blood of the martyrs!” at a rally to show their support for the revolt.

Clearly under pressure, Ghannouchi said on television late on Friday: “I lived like Tunisians and I feared like Tunisians.” He added: “I pledge to stop all my political activity after my period leading the transitional government.”

The response of the street protesters was scornful: “Since 1990, Ghannouchi has been finance minister, then prime minister,” said student Firass Hermassi outside Ghannouchi’s office. “He knows everything, he’s an accomplice.” – Reuters