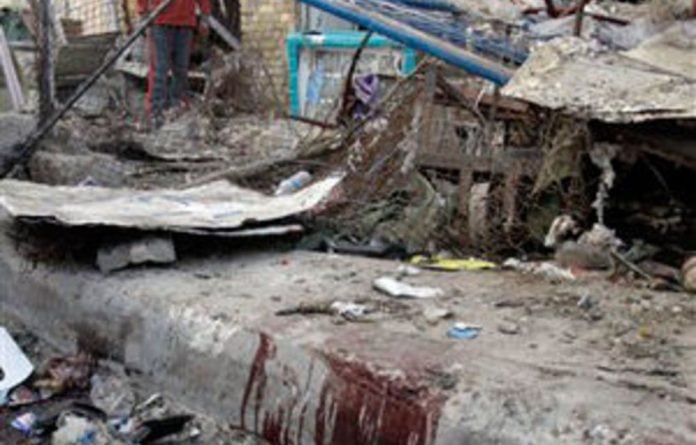 Iraqi security forces were on alert on Friday after a massive car bomb ripped through a funeral ceremony in a Shiite district of Baghdad, killing 48 people in Iraq’s bloodiest day in more than two months.

The blast on Thursday was the deadliest in a series of bombings that claimed 53 lives across the capital, and led to an angry crowd pelting security forces with stones when they arrived at the scene.

It was the latest in a surge in violence in the past 10 days that has left more people dead than attacks throughout any of the past three months, and comes little more than a month after Prime Minister Nuri al-Maliki formed a coalition government, ending the deadlock that followed March elections.

“The government arrests terrorists, they send them to prison, and then they release them the next day,” shouted Abu Mohammed Saadi (56) one of the funeral-goers.

“Take the criminals off the streets, don’t release them so quickly!”

An interior ministry official said the car bomb, which exploded outside a tent where the ceremony was being held early afternoon in the Shuala neighbourhood, killed 48 people and wounded 121.

Saadi and other witnesses said the car bomb was driven by a suicide attacker.

The blast caused part of the tent to collapse and left pools of blood and scattered pieces of clothing and shoes.

Vehicle curfew
Several cars were also completely destroyed, while the windows of nearby homes were shattered. Security forces closed off many of the main roads leading to the blast site and imposed a vehicle curfew.

Policemen and soldiers who rushed to the scene were confronted by an angry mob that assaulted them with volleys of stones, with the security forces initially retreating from the scene.

The interior ministry official said that “armed men” had fired on the forces who arrived at first, causing the soldiers and policemen to withdraw until another army regiment arrived.

But a witness at the scene, Hussein Mohammed Saadi, said that the crowd had become furious after the arrival of the first security force officer at the scene. Saadi said the officer played down the attack and accused members of the crowd of having planted the bomb.

Maliki ordered the arrest of the area’s security chief, army Lieutenant Colonel Ahmed al-Obeidi, in the immediate aftermath of the attack.

In other blasts around the capital on Thursday, five people were killed and 21 wounded by roadside bomb attacks and a bomb placed inside a minibus.

The overall death toll of 53 was the highest for Iraq since November 2, when 11 car bombs rocked the capital, killing 63 and wounding nearly 300 in predominantly Shiite neighbourhoods.

The funeral attack was the latest targeting Shiites since a spate of car bombings last week killed 57 people outside the shrine city of Karbala.

Those bombings came ahead of a Shiite mourning ritual when hundreds of thousands of pilgrims poured into the city to mark 40 days after the Ashura anniversary commemorating the slaying of Imam Hussein, the sect’s revered seventh century saint.

On January 20 on the outskirts of Karbala, three car bombs exploded among crowds of worshippers around 20 minutes apart, killing 45 people and wounding 150 others.

Imam Hussein’s death at a battle near Karbala is at the heart of the historical division between Islam’s Sunni and Shiite sects.

The split has fuelled sectarian violence between Iraq’s Shiite majority and the Sunni Arab minority that dominated Saddam Hussein’s regime until its ouster in the US-led invasion of 2003.

Violence across Iraq since a suicide bomber blew himself up in the middle of a crowd of police recruits in Tikrit on January 18 has already killed more people — at least 192 — than in October, November or December, when 185, 171 and 151 people died, respectively. – AFP

Wave of attacks kills at least 30 in Baghdad

US condemns Baghdad attackers as ‘enemies of Islam’

Dozens killed in a series of bomb attacks in Baghdad