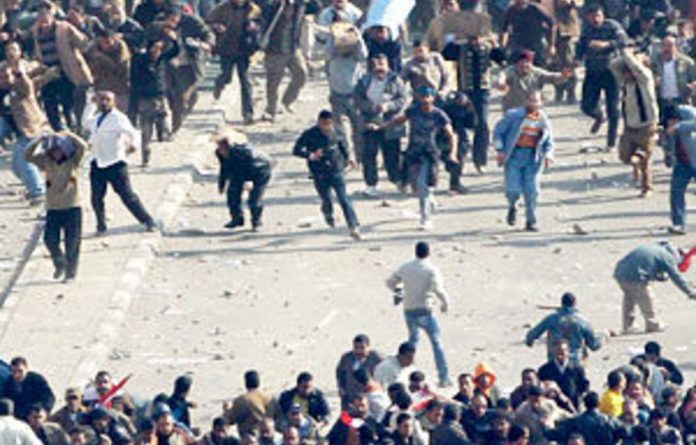 Egypt on Thursday faced another day of violence with at least two people killed overnight in gunfire aimed at anti-regime protesters in Tahrir Square in central Cairo, according to witnesses.

Sporadic gunfire started at about 4am local time and could still be heard nearly two hours later, while some of the army tanks positioned around the square appeared to move from their positions, but it was not clear if they were withdrawing, an Agence France-Press (AFP) correspondent reported.

Witnesses said also that there were many people wounded by fire coming from the October Bridge where partisans of embattled Egyptian President Hosni Mubarak were positioned.

Egyptian Jurists Alliance said in a statement that anti-Mubarak protesters in Tahrir, or Liberation, Square were coming under fire and that several were killed or wounded.

The gunfire came after backers of Mubarak stormed the Cairo stronghold of anti-regime protesters, sparking clashes in which the government said three people were killed on Wednesday.

The US State Department issued a stark travel warning for citizens in Egypt, urging those who want to leave to “immediately” head for the airport, adding that any delay was “not advisable”.

Washington, which has called for restraint since demonstrations broke out 10 days ago, deplored the violence against “peaceful protesters”, while United Nations chief Ban Ki-moon said the attacks on demonstrators were “unacceptable.

The State Department said Clinton had called Suleiman, telling him the violence “was a shocking development after many days of consistently peaceful demonstrations”.

“The secretary urged that the government of Egypt hold accountable those who were responsible for violent acts,” the State Department added in a statement.

The European Union added its voice on Wednesday to calls from US President Barack Obama for the transition from Mubarak’s three-decade-long rule to begin immediately after the veteran president announced late on Tuesday that he would not seek re-election in September.

But the Egyptian foreign ministry said such calls “sought to inflame the internal situation”, while Suleiman, who was appointed this week, insisted there could be no dialogue with the opposition until all the protesters went home.

Tensions
From early afternoon until well into the night, regime supporters and opponents threw stones and battled with sticks and fists in Cairo’s Tahrir Square, the epicentre of the nine straight days of protests that have rocked the Egyptian regime and sent shock waves around the Arab world.

Tensions had been rising from early morning when Mubarak supporters began staging their own rallies around Cairo, saying the president represented stability amid growing insecurity, and branding as “traitors” those who want his departure.

A hard core of tens of thousands of anti-regime protesters had remained at Tahrir Square through the night, angry at the 82-year-old’s refusal to step down immediately in line with the demands of opposition leaders for a clean break with his regime.

Witnesses and AFP correspondents said bands of Mubarak supporters raided the square without warning, some on camels and horses, creating mayhem that quickly degenerated into violent clashes.

Regime supporters dropped concrete blocks on the opposition protesters from the roofs and balconies of surrounding buildings.

The worst of the fighting was just outside the world-famous Egyptian Museum, which was targeted by vandals last week.

AFP correspondents saw scores of wounded carried to a makeshift hospital in a mosque near Tahrir Square, and a medic there said the injury toll ran into the hundreds.

Health Minister Ahmed Hosni Farid told state television 639 people were wounded in the clashes in the square on Wednesday.

Both sides continued throwing rocks and skirmishing into the night, with army and civilian ambulances coming to take the wounded away.

Anti-regime protesters stopped handing over pro-Mubarak militants to the army as they said they were just being released. Instead, they kept about 30 of those they captured at an improvised prison near a metro station.

The captives were badly beaten, an AFP correspondent reported.

Correspondents, photographers and cameramen reporting on the fierce clashes in Tahrir Square said that the Mubarak supporters were hostile to the press.

Media watchdog group Reporters sans Frontières (RSF) said the “shocking” attacks appeared to be in revenge for the coverage of nine days of protests calling for the departure of Mubarak.

‘Departure day’
Protesters have said they will proceed with plans for a massive protest on Friday, their designated “departure day” for Mubarak.

US State Department spokesperson Philip Crowley said the attacks on the protesters were a “direct threat” to the Egyptian people.

“We don’t know who unleashed these thugs on the streets in Cairo … Whoever they are, there needs to be accountability here. This was clearly an attempt to intimidate the protesters,” Crowley said.

White House spokesman Robert Gibbs said: “If any of the violence is instigated by the government, it should stop immediately.”

Tensions rose after Mubarak addressed the nation late on Tuesday, refusing to step down immediately, the key demand of the protesters who have flooded the streets.

“My first responsibility is now to bring security and stability to the nation to ensure a peaceful transition of power,” he said.

Those remarks were seized upon by Obama, who spoke to Mubarak after the speech, and announced on television that he had told the Egyptian president an orderly transition “must begin now”.

Israeli Prime Minister Benjamin Netanyahu warned that there was a battle afoot in Egypt between those who favoured democracy and those who wanted to enforce an Iranian-style radical Islamist system, that could destabilise the key Middle East peace partner “for many years”. — AFP