Excluded learners take to the streets 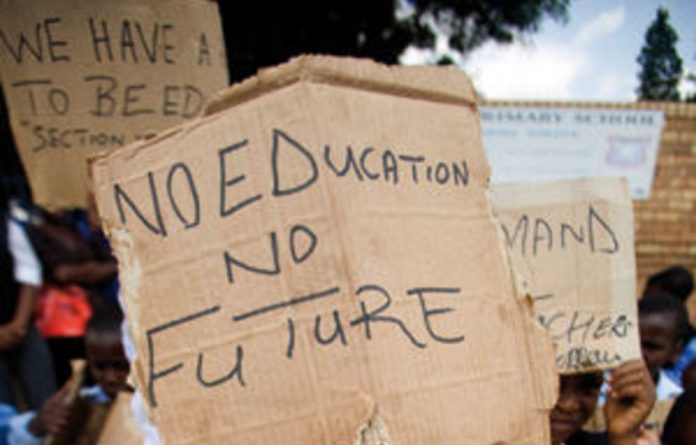 About 60 parents and their children from the informal settlement of Thembalihle, southwest of Johannesburg, took to the streets of neighbouring Lenasia on Tuesday after failing to find places in schools since they opened nearly month ago.

Their admission problems have been mirrored across the country, according to community representatives, children’s NGOs and helplines, and teacher unions.

Exactly how many exclusions — illegal or otherwise — have occurred remains unknown, but the basic education department said affected children are “mostly in rural areas or on farms”. The department had been monitoring the reopening of schools and about 98% of primary-school children were in classrooms — but it did not know when it would issue its report on the re-opening of schools.

In full uniform, the Thembalihle children were soon joined on their march by 15 high school learners who were also still looking for places.

Bhayzer Miya, a march organiser and member of the Thembalihle Crisis Committee, said principals and the Johannesburg South school district office had sent the children and parents from pillar to post since the schools reopened. Some of the parents had tried to comply with requirements by registering their children last year, but had been turned away even then, he said.

Thembalihle’s parents said the reasons principals had given them for refusing their children included overcrowding, an inability to pay fees and a lack of documentation such as birth certificates.

On the first week of school the crisis committee accompanied parents to schools and were told by one principal that there was a vacant classroom that could accommodate about 45 grade one learners, Miya said.

“We were told to organise 45 grade one learners and bring them the following Monday, but when we got there we were turned back because there was no teacher, furniture and funds for it,” he said.

By Tuesday this week the parents had had enough, saying the excuses they had repeatedly heard from schools boiled down to illegal exclusions. Miya said he suspected the schools were claiming to be full, but in reality did not want children from Thembalihle because many parents could not afford the fees.

“Secretaries take instructions from their principals who then tell parents that if they don’t have money or birth certificates, they have to turn them away,” Miya said.

Nokwakha Dziba said she tried to register her son last October, but was told to return with R450. She had only R200. “When I returned in November, I was told the school was full and placed on a waiting list. I am still waiting even now,” she said.

Tempers flared on Tuesday when a district official identified only as Madam Zwane walked away from the Thembalihle parents and children, saying she wanted to address their leaders. Parents started singing protest songs and called the official back.

“We are tired of being represented,” screamed one mother. Madam Zwane then told parents they were irresponsible and that was why their children were still not in school.

“Would I be standing here if I was irresponsible? Don’t tell me I am irresponsible,” cried one mother as other parents also screamed at the official.

Zwane responded that she had the responsibility of ensuring the grade one learners were in class by next Monday. “The school does not have a vacant classroom, but we will create one for these learners and I will contact you before Monday to let you know if you can bring the children,” she told the parents.

She advised the unplaced high school learners who had joined the march to look for space at other schools, a challenge for those who have already tried that channel.

At another Lenasia school, a learner trying to get admission to grade 11 said she was told she could not be accepted because she did not have Afrikaans.

“The principal just looked at my report and told me that I would not be able to pass because I did not have Afrikaans,” said Nesta Cacadu (17), who has moved from Carltonville to her grandmother’s house in Thembalihle.

Cacadu said she had started looking for a school in January because she moved to Thembalihle only this year. “I really don’t know what else to do. I have tried and I am worried about the work that I am missing out on,” she said.

Orphaned twin sisters Shirley and Sylvia Mohanoe (19), who stay with their uncle, said the schools had told them registration was closed. “This is so frustrating. We have tried all we can and there is no help anywhere,” said Sylvia.

Another principal, Sudesh Singh, blamed parents. “In poorer areas many parents have this lethargic attitude towards their children’s education. Others will take initiative while others have many excuses.” He said when parents registered their children last year, some were accepted and others placed on a waiting list.

Still not in the classroom

Around the country community members, children’s organisations and regional representatives of teacher unions helped the Mail & Guardian build a picture suggesting that most children were in school, but many were not.
A small sample of problems: