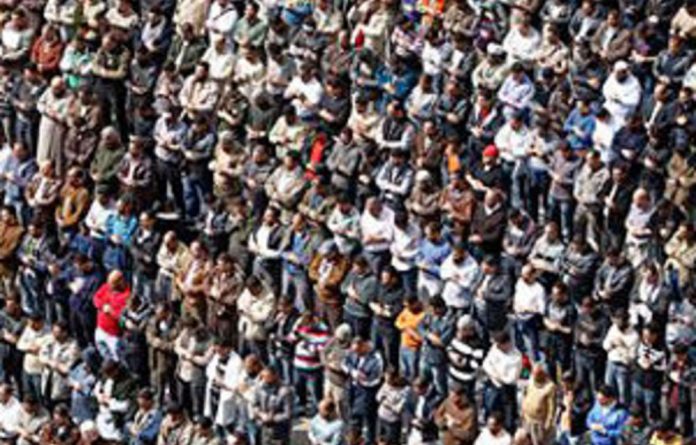 Egyptian protesters massed on Friday for sweeping “departure day” demonstrations to force President Hosni Mubarak to quit after he said he would like to step down but fears chaos would result.

Tens of thousands filled Cairo’s central Tahrir Square, the epicentre of the 11 straight days of protests that have shaken the pillars of Mubarak’s three-decade rule, on the Muslim day of rest.

At one end of the square the faithful prayed out in the open, beneath two traffic lights from each of which hung an effigy of Mubarak.

“We were born free and we shall live free,” prayer leader Khaled al-Marakbi said in his sermon. “I ask of you patience until victory.”

Worshippers used newspapers, banners or even Egyptian flags as impromptu prayer mats, reciting the traditional prayer for the dead in memory of the more than 300 people who have died since the protests erupted, sending shock waves around the world.

The prayer leader and many in the vast open-air congregation cried, still shaken by the ferocious clashes with stone-throwing Mubarak supporters that had left at least eight people dead and more than 800 hurt over the previous two days and drawn a stern rebuke from Washington for its key ally.

Pro-government rally
There was a new pro-government rally on Friday in the upscale Mohandeseen neighbourhood of the capital but it was attended by dozens of people rather than the tens of thousands in Tahrir, and participants told Agence France-Presse (AFP they had no intention of going to the square.

The army deployed about a dozen vehicles around the perimeter to create a buffer zone in case pro-Mubarak demonstrators appeared, although AFP correspondents had seen none by early afternoon.

Troops wearing helmets and full riot gear and protest stewards wearing hard hats carried out identity checks at entrances to the square to prevent it being infiltrated by provocateurs.

Defence Minister Mohammed Hussein Tantawi — regarded by Washington as a key plank of any post-Mubarak administration — visited the square to appeal to demonstrators to give up their protest.

The authorities have been appealing to demonstrators to go home after Mubarak pledged earlier this week not to seek re-election in September.

But opposition groups from across the political spectrum have dismissed the concession as inadequate and have rejected calls by Vice-President Omar Suleiman, Mubarak’s veteran intelligence chief, to enter talks.

“The man [Mubarak] told you he won’t stand again,” Tantawi told the protesters flanked by troops, who urged the crowd to be seated.

Tantawi called on Egypt’s most powerful opposition group, the Muslim Brotherhood — outlawed for half a century — to join a dialogue with the regime.

“Tell the guide to go sit down with them,” he said, referring to the group’s supreme guide, Mohammed Badie.

Badie told al-Jazeera television that the Brotherhood stood ready to enter talks, but only after Mubarak had gone.

“We stand with all the political forces supporting dialogue with whoever wants to implement reforms in the country after the departure of this unjust, corrupt tyrant,” he told the Qatar-based satellite channel.

“We have a single demand. Once it is met, we will engage in dialogue.”

‘I think he will stay until the end of August’
And Mubarak’s one-time foreign minister, Arab League chief Amr Mussa, said he doubted his former boss would leave any time soon.

“I do not think he [Mubarak] will leave. I think he will stay until the end of August,” Mussa told France’s Europe 1 radio.

In his first interview since the protests erupted, Mubarak blamed the Muslim Brotherhood for the violence of recent days, ABC television’s Christiane Amanpour reported.

The veteran leader was “fed up with being president and would like to leave office now, but cannot, he says, for fear that the country would sink into chaos”, Amanpour said.

“He told me that he is troubled by the violence we have seen in Tahrir Square over the last few days but that his government is not responsible for it. Instead, he blamed the Muslim Brotherhood.”

Washington has been increasingly strident in its criticism of the deadly violence unleashed against the protesters, and foreign journalists, by Mubarak supporters in recent days.

State Department spokesperson Philip Crowley said Washington had traced the violence against the protesters to “elements close to the government and the ruling party”, even if it is not clear how far “up the chain” it goes.

But in an interview with US network ABC, Suleiman denied that pro-government elements had been responsible for deaths among the protesters, insisting: “They behaved very well.”

Pushing proposals
Washington has been pushing proposals for the vice-president to take over at the head of a transitional government, which would immediately begin a process of constitutional reform aimed at paving the way for free and fair elections in September, the New York Times reported.

“Senior administration officials said that the proposal was one of several options under discussion with high-level Egyptian officials around Mr Mubarak in an effort to persuade the president to step down now,” the paper said.

“They cautioned that the outcome depended on several factors, not least Egypt’s own constitutional protocols and the mood of the protesters on the streets of Cairo and other Egyptian cities,” it added.

And for at least some of the protesters in Tahrir Square on Friday, the replacement of Mubarak by Suleiman would not be enough.

Egypt’s regional rival, Iran, weighed in meanwhile, calling Mubarak a “servant” of Israel and urging the Egyptian people to rise up and establish an Islamic republic.

“Do not back down until the implementation of a popular regime based on religion,” supreme leader Ayatollah Ali Khamenei said in his sermon at the main weekly Muslim prayers in Tehran, switching from Persian to Arabic for the benefit of his Egyptian target audience.