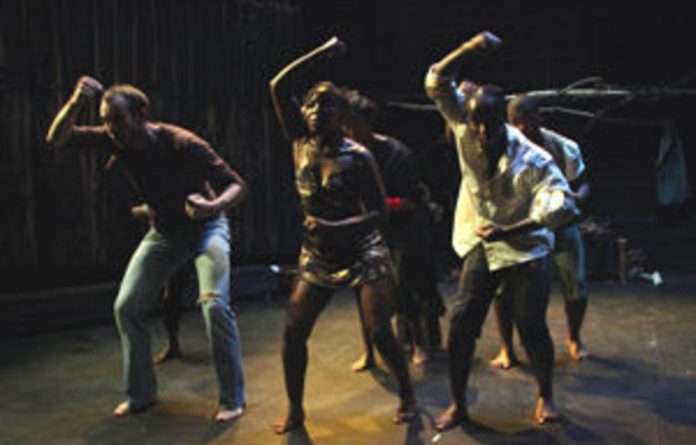 James Ngcobo is one of those directors with a restless spirit and wide-eyed curiosity.

In the past few years he has brought to South African audiences The Lion and the Jewel by Wole Soyinka, The Amen Corner by James Baldwin, The Water Carriers by Pelen Baldini and Touch My Blood by Fred Khumalo.

Some of these productions have been resounding successes (The Lion and the Jewel and The Water Carriers), others have been flops (Touch My Blood). His latest project is the Malian legend, Sunjata.

The epic tale is about two kings who are told by an oracle about the birth of a boy who will become a great king. That’s welcome news for one of the kings who is desperate for an heir to be born; not so for his rival who doesn’t want to hear about an heir while he is still alive. The story includes an ‘ugly” woman, who plays a crucial role in the geopolitics of the region.

Ngcobo is a keen story­teller, as interested in the mode of telling as in the story itself, hence a few minutes are allocated to the actors to quibble about the telling of the story. One says that others have told the story in their own ways but this is how the current actors are going to tell it.

Ngcobo has taken some liberties and important speeches — such as the moving monologue by Sunjata’s father beseeching the gods for an heir or after the birth of Sunjata — are in Sotho.

There is a smattering of other languages including, I assume, Arabic and Bambara. In fact, Ngcobo got Sacko Boubacar, a Malian antique dealer, to work on the production to help the story to retain its Malian feel.

‘Underwhelming’
A Zimbabwean friend and two of her West African friends (one a Senegalese and the other a Nigerian Marxist) saw the play last week and they weren’t blown away by it. Given their background the story had particular resonance, yet they found the production ‘a bit underwhelming”. Such a ‘grand story, of grand proportions needs a grand stage and regal costumes, to be huge, like the legend himself”.

The show is however enhanced by Conrad Kemp’s performance as Sunjata’s mother and as a sorcerer. And there are other interesting instances of gender role reversal. The production’s intrigue is heightened by casting Sibulele Gcilitshana and Shoki Sebotsane as the rival kings.

The production could also have done with sharper, more poetic writing at critical moments. At times I was deflated by the loose, prosaic language (for instance, a beautiful woman’s waist is described as ‘nicely shaped”). The form of the play arose from Ngcobo’s workshop, which effectively has given rise to an ensemble work.

I read DT Niane’s Sundiata: An Epic of Old Mali in the late 1990s and was blown away by the tale of African royalty and good leadership. That grandeur, that sense of Sunjata being a superior being, doesn’t quite emerge in Ngcobo’s production.

In a passing conversation Ngcobo said the work was one of the ‘most difficult” pieces he had worked on. That he has taken on this demanding work is in itself something of an achievement.

Robert Mugabe was once a fervent pan-Africanist, but he failed to act like one after he came to power
Read more
Friday

The president and his fawning ministers are being interrogated about corruption. Sound familiar?
Read more
Africa

He was the hope of many Zimbabweans and the man Mugabe feared most, but he failed at the last hurdle
Read more
Advertising
Continue to the category
Politics