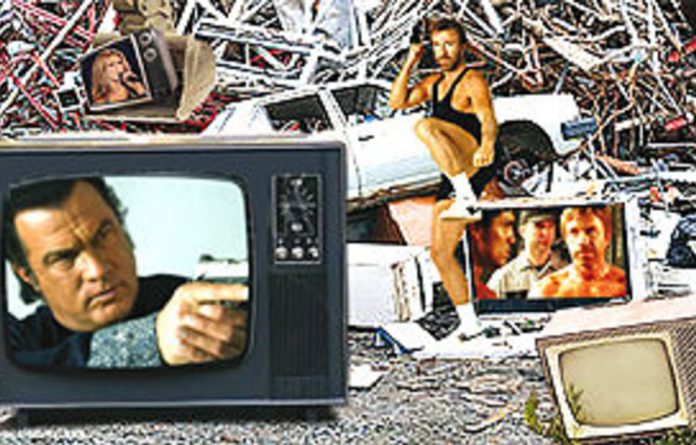 Don’t fret if you miss the soap opera Generations on SABC 1 at 8pm — you can still watch it at 9am, the following day.

If you miss it then, you can watch the same programme on SABC 3 at 10am. If you unable to watch it, there’s no need to despair, for come Saturday, SABC 1 will show every single episode shown that week from 10am until noon.

Cross-channel collaboration seems to have been upped to get SABC’s flagship programmes as much exposure as possible. So a programme, say Isidingo, that is shown on SABC 3 is also likely to be shown as a repeat on SABC 1.

This recycling isn’t just short term. The corporation’s commissioning editors (part of the SABC’s consolidated content hub) have gone into the SABC’s vaults, feather dusters in hand, bringing out programmes first shown in the 1990s. Lesilo Rula and Skwizas are some of the programmes getting a second lease of life on the screen.

When they are not serving the usual helpings of violence (Chuck Norris and Steven Seagal are favourites), then it’s inane comedies by Leon Schuster and the other usual suspects. But it’s not always bad. Once in while one of the channels will show a really good film. But such auspicious moments are always spoilt by their ill-considered timing.

The saga
A scriptwriter, who follows local television closely, said that apart from Intersexions (an edgy and compelling sex show on SABC 1), there had not been any new exciting programmes made. “What they show is a lot of old shows from the 1980s.”

The content saga at the SABC, described by some as “a content collapse”, is linked to the problems that have plagued the SABC for years. Its signifier is that the corporation’s chief executives always seem to be in the out tray.

As the SABC battles to retain audiences appalled by repeats and poor programming, and eagerly subscribing to satellite television, it has become difficult to distinguish it from private players like e.tv.

Rehad Desai, a filmmaker and Independent Producers’ Organisation board member, said the SABC should not be in competition with e.tv, screening programmes about wrestling, dancing and becoming millionaires. “This has nothing to do with enhancing [the lives of] citizens of South Africa — that should be left to the commercial sector.”

He said private radio stations, especially 702, Kaya and Highveld, had taken over the role that the SABC should be playing. “The role of the SABC is to get the nation in conversation with itself.” Desai said the panicky approach of the SABC seemed to be driven by the question, “How do we stop losing our audience?” and the short answer is, “Let’s imitate them [commercial stations].”

Tawana Kupe, Wits University’s dean of humanities and journalism professor, said the scripting and storytelling template in use at the SABC was founded on the Hollywood formula. “Can’t we tell our stories differently? African stories are being told via other people’s stories,” Kupe said.

‘Dumbing down of content’
Muvhango, a soap opera on SABC 2, used to be diverse in its presentation and context, but it now felt as though it was set in Johannesburg. The evolution of Muvhango from its Venda-specific context into a culturally neutered programme was just one instance of the dumbing down of content at the SABC Kupe said this defeated the whole purpose of having a programme in Tshivenda.

Kupe said the SABC’s mandate was to produce local content and a diversity of programming. “This is not just about different programmes but different approaches in making content,” he said.

Desai concurred, and said that soapies increasingly carried little interrogation of real issues. The content seemed to be propelled by base emotions such as anger, love and jealousy.

The downside of the content collapse at the SABC was that younger directors and filmmakers who started out making bold, innovative programmes had to scale down their operations. Some had even closed down their businesses altogether. “There are a lot of people like that,” Desai said.

This was corroborated by a former SABC board member. On appointment, the board had to meet several production companies that hadn’t been paid for work done for the SABC.

“Some of the companies that folded must have been the black-owned firms that didn’t have large cash reserves. The crisis has set back the transformation agenda of the production industry,” he said, and added that the turnaround strategy presented to Parliament last year sought to address bad management and corruption — but not much was said about content. “You can make savings by not commissioning — that’s a bit like a bakery that doesn’t produce bread.”

Broadcasting Act
Some close watchers of the corporation feel that the SABC might be in breach of the Broadcasting Act. One of the key concerns of the law, passed in 1999, was the restructuring of the SABC, with the aim that the public broadcaster should show South Africa in all its diversity.

Kupe said that the broadcaster should be showing people in their own localities, so that those living in Limpopo, for instance, would be able to say, “I recognise that”. Originality didn’t mean that you couldn’t adapt formulaic programmes like the BBC’s quiz shows, Survivor and others, but “this can’t be the mainstay of what you offer”. Kupe said. “If the SABC insists that it is complying with its mandate, it is missing the point. The question should be ‘what’s uniquely South African about what it is showing’.”

The situation is unlikely to change. The present board has yet to call for new commissions, so the broadcaster will not be screening quality programmes any time soon.

Desai said that the commissioning briefs, which were supposed to be released in December, would probably be put out only later this month, or even in March. And any production commissioned now would be flighted only next year or in 2013.

The industry has welcomed the appointment of new Minister of Communications Roy Padayachie, but it is going to take time for his turnaround strategy to start producing fruit. Until then it’s repetir continua.

What’s the problem?
Asked for comment, Kaizer Kganyago, the SABC’s spokesperson, said that the repetition of films was not unique to the SABC. As they were “expensive”, the “SABC has to repeat them as per the number of runs negotiated with the suppliers. This is part of the business model of television. There’s no television channel in the world that has 24 hours of fresh content because [that] wouldn’t make financial sense.”

He said the SABC had 11 — and still counting — new programmes that would soon be shown. These included The Weight, Outlaw, a new season of Relate on Wednesday nights at 9pm, Mzansi Insider, Soul Buddyz, and a new series of Class Act.

He said the SABC wasn’t flouting its licensing conditions. The corporation was “guided by its licence conditions, which are specific around language and a mix of genres with a strong emphasis on local content”.

But there were circumstances when the SABC was unable to do this, for example, during the World Cup last year. Kganyago said that, from a “network transmission point of view”, the SABC “reached just over 91% coverage of the country, with plans to increase it in the future”.

He said that the SABC was also delivering on its mandate to cater for the country’s 11 official languages — “a big task for three channels if you ask me”.