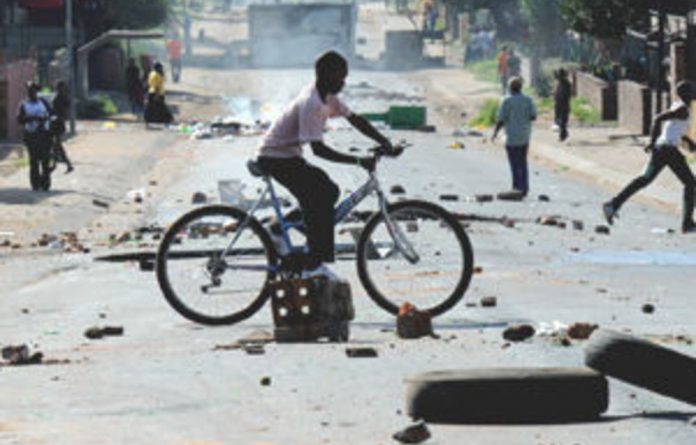 Internal ANC politicking has been blamed for the unrest in Wesselton township outside Ermelo, Mpumalanga, this week.

The ANC’s Gert Sibande regional executive council (REC) has been accused of trying to impose candidates on ANC wards in the area.

Ward 5 member Nkululeko Shongwe said the unrest started in his ward and then spread to the other eight wards in Wesselton where ANC members also refused to accept the council’s candidates.

“Last Thursday [February 10] the region brought their own candidates instead of letting us choose our own people,” Shongwe said this week. He said Ward 5 wanted to nominate Bongani Phakathi but the council tried to impose Mfanimpela Nkosi on them for the nomination. “The REC was supposed to present four candidates, including Bongani Phakathi, for us to choose from, but they arrived with Nkosi only and tried to force us to accept him.”

He said a second meeting was held with the council on Sunday but again the ward was not allowed to choose Phakathi. “After that people didn’t go home but started the protest, which is still going on,” Shongwe said. “The other wards joined us, seeing the chance to raise their concerns after the region also ignored them.” He warned that the unrest would continue until the ANC’s national executive committee (NEC) attended to their concerns.

“Even if the police have come to stabilise the situation, the issue is not over. We want to speak to the NEC because we don’t trust the ANC officials from the region and the province as they have their own agenda in the nomination process,” Shongwe said.

Conflict within the ANC
Muzi Chirwa, the regional council secretary, agreed that conflict within the ANC caused the violence but denied the council was imposing its preferred candidates on the wards. “There is no truth to [those] allegations— We always follow democratic processes,” Chirwa said.

“We have information that there are a number of councillors among the 23 we have in the municipality who mobilised branch members to riot because they were left out in the nomination process. They want to hang on to power and, in the process, incited branch members to revolt under the pretence of service delivery protests,” Chirwa said.

He could not identify those he described as “greedy councillors” but said the allegations were made when the regional council met the 21 ANC branches that fall under the Msukaligwa local municipality on Tuesday.

He said the REC had held a caucus meeting at the municipality on Wednesday and told the municipal council that councillors were behind the protests. “We have informed council that these councillors are mobilising the community to riot,” Chirwa said. “We would like to warn those involved to refrain from such action. We are on their heels and there will be a hefty price to pay once they are identified,” he said.

Msukaligwa mayor Bheki Vilakazi described the situation as internal politics “masquerading as service delivery protests”. At the heart of the protests, he said, were the nomination lists. “The municipality is on record [as] saying that the recent spate of violent protests — has nothing to do with service delivery concerns as reported by most media houses,” Vilakazi said.

He said the municipality was concerned about the malicious damage to municipal property, which amounted to about R250 000. Traffic lights, road signs and access routes to Wesselton were damaged when barricades made up of rocks and burning tyres and hay bales were set up.

Anthony Benadie, the provincial leader of the Democratic Alliance, said there was a link between the power struggle within the ANC and concerns over service delivery.

“The communities in Wesselton are fed up with hollow promises by those in power. The dilemma that the community faces is to replace one set of careless, greedy leaders [with] another group of power-hungry representatives,” said Benadie.

By Thursday more than 120 people had been arrested on charges of public violence. Fifty-one appeared in the Ermelo Magistrate’s Court, 25 of whom were minors. Police are waiting for postmortem results on a 41-year-old man who was shot dead on Tuesday to determine if it was a police bullet that killed him. — African Eye News Service

It’s only 32km to the state clinic, but for the poor that’s a world away