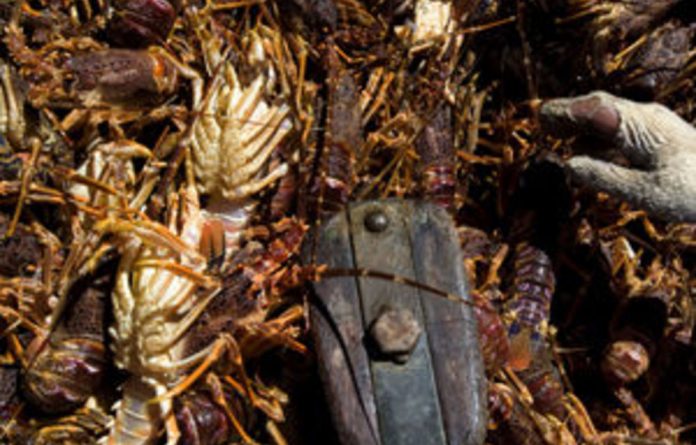 Industry experts warn that lobsters will soon disappear from the nation’s menus if over-fishing is allowed to continue to push South African stocks towards extinction.

The recent extension of rights to subsistence fishers has created an “open season” on West Coast rock lobsters, also known as crayfish, which is being exploited by Chinese triads and has reduced the shellfish stocks to a level lower than those of abalone, they said.

The collapse of the lobster fishing industry would mean the end of an industry that supports more than 4 300 jobs and is worth an estimated R347-million.

“Lobster stock is about 3% of pristine, which is the level needed to sustain fishing. They are biologically worse off than abalone, which is at 8%,” said Shaheen Moolla, the former head of Marine and Coastal Management (MCM).

The devastation started in 2007, he said, after former environmental affairs minister Marthinus van Schalkwyk announced “interim measures” to grant subsistence fishing rights for lobsters, which are easily accessible inside the 200m-depth shallows along the West Coast to East London.

Quotas for lobsters and linefish were given to 1 500 subsistence fishers, who became known as “interim relief” fishers. A challenge to the allocation by the West Coast Rock Lobster Association was rejected by the Supreme Court of Appeal in September last year.

Moolla said this week that the interim relief fishers were allocated 200 tonnes of lobsters for the 2010-11 season. “In the Elandsbaai area alone they have already harvested at least 500 tonnes, with more than half the season left. In Paternoster they are removing 30 000 lobster tails a day. If poaching levels are even half that in other zones, we are probably looking at the interim relief sector taking about 1 500 to 2 000 tonnes,” he said.

Open season
A recreational fisher who did not want to be named said he had witnessed interim relief fishers taking out “crayfish tails by the sackful and throwing the rest of the carcasses away. It’s tragic to see what’s happening. It’s open season on crayfish.”

With virtually no intervention by fishery control officers, organised gangs such as the Chinese triads were buying up interim relief quotas and paying a pittance for their catches, he said.

Environmentalist Sean Thomas, who is documenting the huge illegal reptile trade on the West Coast, said it was “in some instances connected to the illegal sourcing of abalone and lobster. Wild tortoise populations are being targeted as well.”

The lobster free-for-all was having a serious impact on domestic and international markets because they were being dumped at rock-bottom prices, said Moolla, now a director of Feike Natural Resource Management Advisers and consultant for the Worldwide Fund for Nature and the World Conservation Union, IUCN. “The last two months of 2010 witnessed the collapse in the price of South African lobsters on the international market from about $50/kg to less than $30/kg,” he said.

Carol Moses, the spokesperson for the fisheries department, which replaced MCM last November, said it was managing lobster stocks under a recovery plan that aims to return them to 20% above the 2006 levels by 2016.

“The 2010 status of the South African marine fisheries report indicates the recovery plans are bearing fruit,” she said. It was not true interim relief fishers were not monitored, she said, but the department was reviewing the poaching estimate of 500 tonnes built into its annual total allowable catch for lobsters.

Since the opening of the lobster season in November, it had conducted 11 special operations that resulted in more than 335 fines worth R420 200 and the arrests of 13 suspects. “A total of 7 866 West Coast rock lobsters were confiscated, 5 000 units from roadblocks, 1 600 from commercial boats and 1 100 from an airport,” Moses said.