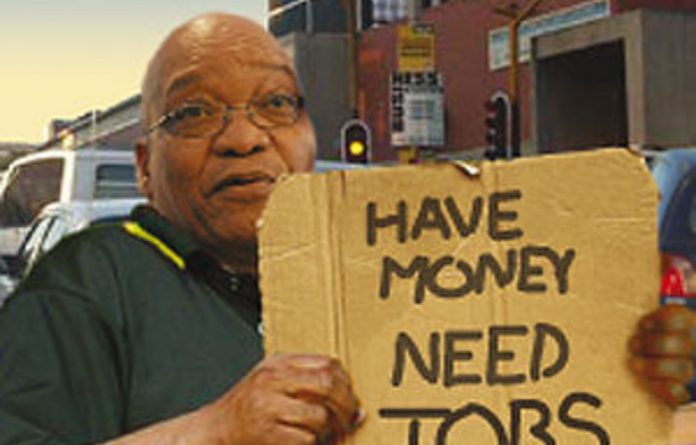 You would have to have been asleep not to have noticed that jobs, or rather the lack of them, are in the news.

The Big Z has declared 2011 the year of jobs and, as he told us in his State of the Nation address, the government will throw billions in subsidies and tax incentives at new job-creation initiatives.

We await the details, but it appears that if there is a job to be had, money is coming its way. I listened to a radio interview with Ebrahim Patel, the minister of economic development, and was left with the impression that the government will be asking business and labour to find ways of hiring more people.

This is not Capitalism 101 as I understand it. The idea is that through competition we get better prices and services and, ultimately, more jobs. But the South African way is to send issues such as these to the National Economic Development and Labour Council (Nedlac) where the government, business and labour plot our job-creating future.

Perhaps the solution is to have at least two Nedlacs so that the incumbent, which it has to be said has not managed to make a dent in the country’s unemployment numbers, can feel the chilly wind of competition?

But if we have an absence of jobs, we also have a shortfall of ideas on how to fix the problem. Improving education and upgrading infrastructure are key building blocks but we are doing this already and without any real impact on unemployment.

The University of Johannesburg’s Stephen Gelb, who has delved deep into the microeconomy, where businesses make employment decisions, says much more than a weaker rand and more flexible labour market are required. Gelb has studied the television assembling industry, electronics potentially being a large employer.

He says the industry was seen at the outset as strategically important. “Only six assemblers were licensed (later raised to eight), who consolidated into four local assemblers by 1984. Rather than being plagued by chronic overproduction due to easy entry, as in China, the South African industry quickly became a virtual cartel, the lobbying power of which maintained high tariff barriers against imports until the early 1990s,” says Gelb.

There has been strong growth in demand for television sets in South Africa, between 2002 and 2006 increasing by 27,5% a year to 1,9-million sets, according to the department of trade and industry.

“But demand growth has been met increasingly from imports, which grew just below 50% a year between 2002 and 2006,” says Gelb. As tariffs came down local assemblers closed their operations and now import, but three Chinese companies, which entered the market between 12 and 17 years ago, have remained. The three — HiSense, SVA and Xoceco — account for 60% of television output in South Africa, about 25% of which is for domestic demand.

“Intense competition in the television assembly industry in China through the 1980s and 1990s encouraged firms to start internationalising to absorb excess productive capacity and component inventories,” says Gelb.

Profit margins are low, says Gelb, about 2,7%, about the same as the HiSense group as a whole. Employment in South Africa is about 200 people of whom 10% are Chinese expatriates. “The HiSense management argued that [capital] productivity in South Africa was about half the level in China, partly because labour regulations restricted overtime and double shifting.

“Though South Africa was the first country in which HiSense invested, the local operation is now a very small part of the parent firm. Group global revenues rose by 21% a year from $1-billion in 1998 to $7-billion in 2008, and South Africa contributes only approximately 1% each of global turnover and global employment [about 22 000 in 2008].

“This is in line with the South African share of turnover in other multinationals operating in the country.” Television output in South Africa remains largely low in added value. High-value components are imported. HiSense has focused on building global strengths in both technology and branding.

“The firm’s R&D efforts have paid off. In 2005 it became the first Chinese company to design and develop its own digital television chip. “HiSense is now producing LED and LCD televisions which are technologically as advanced as those of Korean and Japanese producers, and importing these into South Africa, where their retail price is 25% to 35% below that of other Asian producers,” says Gelb.

Tariffs
“In sum, the television industry reflects a familiar story in South African consumer goods manufacturing over the past 20 years: high-cost production due to small market size, severe competition from imports due to lowered tariffs on finished products and inappropriate tariff structure as well as poor border regulation, limited exports due to poor technological capabilities, all exacerbated by time-consuming labour relations and inappropriate macroeconomic (especially exchange rate) policy.

“Notwithstanding all these problems, the domestic television industry has been quite resilient, continuing to grow at a more than respectable rate even though its output comprises a falling share of the domestic market.”

Gelb says that Chinese television operations in South Africa show that it is possible to sustain manufacturing in mass-market consumer products directed at the low-income, primarily domestic market and contributing to output and employment while earning low, but positive, profits.

“This has been achieved despite high maintenance labour relations, indifference from the government and significant ‘cultural distance’ from their South African customers and suppliers. In the television industry itself, and the broader consumer electronic appliance industry, producers in South Africa, including foreign investors, will continue to be constrained in terms of scale economies by the linked problems of limited market size and lack of technological capability.

“Local component production could enable competitive exports of assembled appliances to sub-Saharan Africa, but locally owned firms will not take on the investment risk.

“Chinese assemblers might do so if domestic cost structures were appropriate but policy shifts in the exchange rate and in the labour markets would be required in addition to trade policy intervention.”

Put a little more simply, Gelb sees benefits for the South African economy in emulating more of the Chinese business model, including low costs for management and salaried workers.