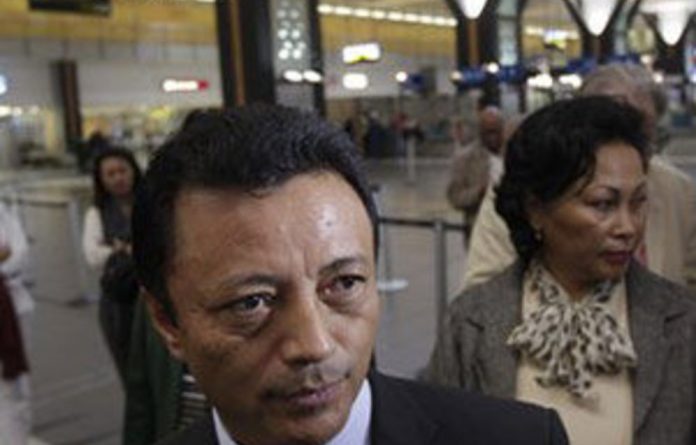 Former Madagascan president Marc Ravalomanana was blocked from leaving South Africa Saturday, after an airline refused to give him a boarding pass citing a letter from the Madagascan civil aviation authority.

“I am going to Madagascar for peace not war, why are they stopping me here now,” a visibly irate Ravolomanana told journalists at the OR Tambo airport after an Airlink flight staff member told him she could not issue him with a boarding pass.

He was shown a letter from the Madagascan civil aviation authority which read: “Mr Ravolomanana Marc and company are non grata persons in Madagascar. So to preserve public order don’t take them aboard.”

Accompanied by his wife, three sons, daughter and his staff, Ravolomanana arrived at the airport two hours before his flight was scheduled to take off at 8am GMT, to check in.

However after he presented his passport, flight staff told him to wait as she was awaiting permission from her manager.

“I can’t check you at the moment, I am waiting for an update from my manager, please wait a few minutes sir.”

After asking several times what was happening, Ravolomanana’s coordinator Jens Thorsen showed him the letter from the Madagascar civil aviation authority.

Supporters converge for homecoming
“Many people in Madagascar are waiting for me at the airport but I am still here. Now I just received this note now only here … I am very very upset.”

In Madagascar, several thousand Ravalomanana supporters had already converged on the Ivato airport, a few kilometres from the capital Antananarivo, to welcome the ousted president.

The news that he was grounded in Johannesburg had not yet reached the large crowds massing behind a police cordon, waving posters of their leader and singing hymns.

“We are fed up after two years of this transition,” said Vohirana, a 35-year-old Ravalomanana loyalist, referring to the shaky rule of Andry Rajoelina, who ousted the elected president in March 2009.

Convinced that “their president” would make a heroic homecoming later in the afternoon, droves of supporters continued to walk down the main airport road, under the watchful eye of policemen in full anti-riot gear.

“We flew in last night from La Reunion especially to welcome our president,” said 52-year-old Pierre, standing next to his wife.

Ravalomanana, who has spent the past two years in exile, mainly in South Africa, announced on Thursday that he would return to his homeland on Saturday, insisting he was still the island’s rightful leader.

“I return to my country humbly, so that we can return to democracy, and together create a bright future for Madagascar,” he told reporters in Johannesburg.

“I know the risks facing my return, but cannot allow them to get in the way of us restoring democracy. I have nothing to fear. I have done nothing wrong,” he added.

The 61-year-old self-made millionaire was last year sentenced in absentia to life in prison and hard labour for the death of 30 opposition protesters killed by presidential guards as they attempted to march on the presidential palace in February 2009.

The sentencing was Ravalomanana’s third since his ouster. He was previously handed a four-year jail term and a fine for a case of conflict of interest in the purchase of a $60-million presidential jet and five years’ hard labour over a land purchase.

While the autocratic Ravalomanana was criticised during his seven-year graft-tainted tenure, Rajoelina has failed to secure international recognition.

The deadlock has left the island in a political and economic limbo that foreign mediations and home-grown dialogue have been unable to break. – AFP