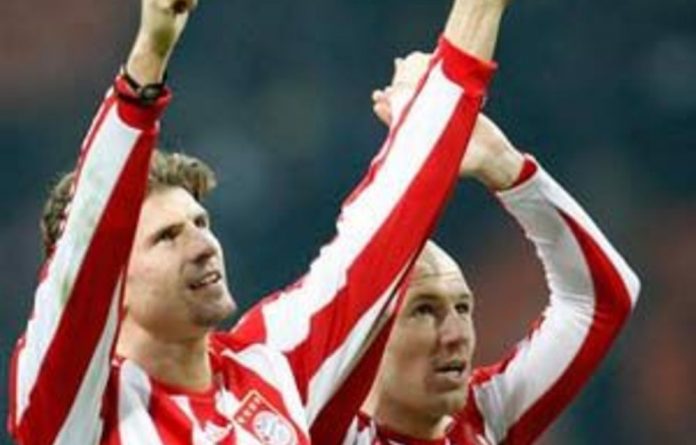 Italian football’s Champions League fortunes suffered a further blow on Wednesday as holders Inter Milan could not stem the tide of home defeats.

They went down 1-0 at the San Siro to the team they beat in last season’s final Bayern Munich.

Mario Gomez’ last minute goal saw Inter join city rivals AC Milan and AS Roma in succumbing to home reverses in their Last 16 first leg ties and in real danger of seeing not one representative from Serie A in the last eight in a competition they once dominated.

By contrast England could well have four of the last eight as Manchester United were held 0-0 away at French champions and France’s only ever winners of the tournament Marseille in an instantly forgettable encounter.

However, the result appeared to please both coaches, Marseille’s young handler Didier Deschamps — who guided Monaco to a surprise final spot in 2004 — and United’s legendary manager Sir Alex Ferguson, who has two Champions League trophies to his credit.

Inter suffered from a lack of attacking options with Samuel Eto’o their sole specialist striker — but even so Gomez’ late winner could well have knocked the stuffing out of the Italian champions.

However, Inter coach Leonardo refused to accept that the defeat meant he had to change their tactics radically for the return leg in Munich.

“Of course it’s a bad defeat but the only thing that changes is your mood, it doesn’t change the game in Munich where we’ll go and try to win,” said Leonardo, who has engineered a revival in Inter’s form since he replaced Rafael Benitez in late December.

“Nothing is compromised. It’s hard to lose in the last minute but we played well.”

Gomez, who has been outstanding in all competitions for Bayern this season after a disappointing start to his career there, said his goal was rich reward for Bayern’s positive approach to the game.

“That was certainly my most important goal in the Champions League,” he said.

“When you score a goal just before the end, which seals an away win, that is, of course, very nice.

Keep a clean sheet
Deschamps, who captained Marseille to the 1993 trophy, had already gone on the record to say that he wanted his team to keep a clean sheet and he admitted he was proud of the fact they had managed to do so.

“I am very happy with my players because they have done their best tonight as Manchester United showed what a good team they are,” said Deschamps, who also captained France to the 1998 World Cup and Euro 2000 trophies.

“Maybe we will have an opportunity to score in the second leg. It is not a bad result for us but it is a good one for United,” he added.

Ferguson conceded that the result left the outcome delicately balanced, but he took solace from the fact his side still have their fate in their own hands.

“This sort of result can be dangerous if you concede a goal at home,” said the 69-year-old Scot. “But it’s simple because if we win, we go through.

“It was a disappointing game but they [Marseille] were desperate not to concede a goal.

“But I also expected more of us offensively, as we didn’t make the most of our chances when we got into good positions.” — Sapa-AFP