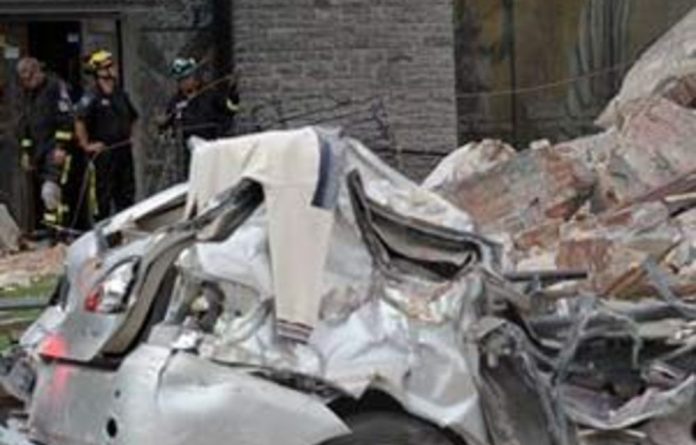 International rescuers intensified their search for earthquake survivors in New Zealand on Thursday, despite fading hopes of finding any more people alive and fears a damaged 26-storey hotel tower could collapse and trigger a new disaster.

Teams from quake-prone countries such as Japan and the United States sent in sniffer dogs and lowered microphones into rubble to probe for signs of life, two days after a 6,3-magnitude quake struck the tourist city of Christchurch.

New Zealand Prime Minister John Key said the death toll had now climbed to 98 and suggested the numbers could rise considerably. There were grave fears, he said, for about 200 people still missing.

Search teams said their aim remained to rescue those trapped but advised caution.

Teams rushed to a small church after it was believed that a woman’s voice had been heard — apparently the first sign in more than 15 hours that people might still be alive. It turned out to be another false hope.

“Right now we do not have any active contact with any person or any indication of signs of life at any location we are working at,” fire rescue coordinator Jim Stuart Black said.

Key said the death toll was certain to worsen.

“The indications we’re getting from the police … Is that the the loss of life could be more substantial than anyone of us had ever dreamed of,” he told Sky News television.

“They’ve been in touch with a couple of hundred families who have clearly indicated that they have a loved one missing and police have every reason to believe those people may be fatalities.”

Hopes faded by the hour, but there was renewed activity at what was feared to be the deadliest single collapse — a six-storey building where up to 120 people, including many missing Japanese students, are feared buried.

Around 30 of them, in orange and blue overalls, clambered over rubble which also housed a third-floor English-language school.

“We have a big team and we are determined to help,” Kai Jinnai told Reuters. “… While we are here we are going to do our very best.”

In Japan, chief cabinet spokesman Edano said 27 Japanese were still missing in the South Island city, with many of those from the King’s Education school in the CTV building.

Death toll to climb
Rescuers faced the risk that a nearby 26-storey hotel could topple at any moment and trigger collapses among other damaged buildings. The Grand Chancellor Hotel was already leaning badly.

“It’s incredibly dangerous … if it hits the ground it will create a significant shock wave,” Mayor Bob Parker said.

Rescue teams had worked through a second night under floodlights, but found only bodies. They still hoped for a miracle, along with distraught onlookers awaiting news.

“Miracles happen and we’re keeping that in the forefront of our minds. That sort of things drives you and pushes you on,” rescue official Keith Norton said.

The last rescue was of a woman, Ann Bodkin, from a finance company building mid-afternoon on Wednesday.

Cliff said up to 22 bodies were believed to be trapped in the rubble of the city’s stone cathedral, where the spire had toppled onto a square normally crowded with tourists.

More than 100 aftershocks
Rescue operations have focused on the central business district, which bore the brunt of the quake on Tuesday afternoon when streets and shops were filled with lunchtime crowds.

More than 100 aftershocks have brought down more debris. Roads have buckled and large pools of water have welled up from broken pipes and sewers.

In places, roads had collapsed into a milky, sand-coloured lake beneath the surface, the result of Christchurch’s sandy foundations mixing with subterranean water under the force of the quake. Officials call it “liquefaction” of the ground.

The quake could end up being the costliest disaster for the global insurance industry in nearly three years. It is not expected to be enough, however, to arrest a sharp multiyear decline in insurance and reinsurance pricing.

Key has been cautious on damage estimates, but said the country could afford to rebuild the city. The prime minister on Thursday reshuffled his cabinet to allow a senior minister to focus on the country’s worst natural disaster in 80 years.

More than 1 000 workers were expected to comb though shattered buildings, with the city divided into search grids.

Deputy task force commander Peter Dawson said finding more survivors would depend on the fitness of people trapped and the conditions of the collapsed spaces inside buildings. — Reuters