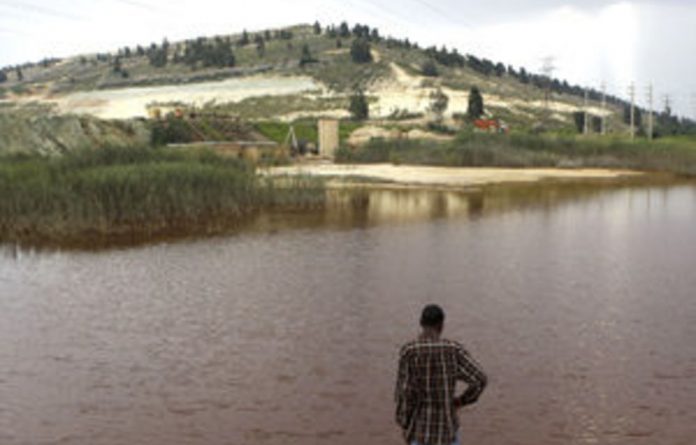 Dangerous levels of radio­activity in Gauteng’s mine dumps will take decades and billions of rands to clear, say the scientists who blew the whistle on the province’s acid mine drainage problem.

In the wake of the government’s decision last week to set aside R225-million to treat toxic water in underground mine voids, the focus fell on cleaning up hundreds of tailings dumps and slimes dams across the Reef. According to the government report on acid mine drainage toxic residues in mine dumps are seeping into underground water and exacerbating the problem.

Anthony Turton, a scientist who raised the alarm about acid mine drainage a decade ago, said this week that sorting out the dumps would be difficult. “The sheer scale and complexity of dealing with radioactive dumps is far worse than the water problem,” he said.

Families were already being moved and legal action was being threatened over the best way to deal with this legacy of the gold rush more than a century ago. Mariette Liefferink, the chief executive of the Federation for a Sustainable Environment, said the tailings dumps and dams were historically sited on unlined dolomite, resulting in heavy metals and uranium ­seeping into groundwater.

“There are at least 270 tailings dams on the Witwatersrand that will continue causing acid mine drainage for hundreds of years,” she said. Liefferink pointed to the recent relocation of families from a tailings dump at the Tudor Shaft informal settlement on the West Rand after radiation levels were found to be 15 times higher than normal.

Thirty-five of 197 affected families had been moved in the past fortnight after a world expert in uranium products, Chris Busby, found that radiation levels at Tudor Shaft were comparable with “the Chernobyl exclusion zone — higher in fact”. Other informal settlements, including Bull Brand, Soul City and Baghdad, and an RDP housing settlement established close to Tudor Shaft, might also have to be moved.

Contamination
Like the escalation of acid mine drainage problems a decade ago, the focus on radioactive contamination started on the West Rand. A recent study by the Council for Geoscience showed residential areas such as Carletonville, Westonaria and Khutsong had a high risk of contamination.

“All the tailings dams on the West Rand contain sediment high in uranium,” said Liefferink. “But Tudor Shaft is mirrored by all the other goldfields of the Witwatersrand. Residents are exposed to dust pollution from the mine dumps, contamination of water and crops and pollution of soil and other materials they use for construction.”

Health risks included cancers, Parkinson’s disease, Alzheimer’s, neurotoxic syndromes and growth deficiencies. Turton and the Gauteng government have compiled a report on the reclamation of “mine residue areas” that will be released next week for public input. “Our task is to decide what to do with the mine residue,” he said. “Billions of rands could be involved.”

The options included red-lining radioactive hot spots, rehabilitating the dumps, or re-mining the dumps and creating licensed mega-dumps elsewhere. This could take up to 30 years, he said.

Liefferink’s federation is opposing the remining and resiting of dumps and is taking legal advice on challenging 28 recent authorisations. “Because of the nuclear renaissance and renewed interest in uranium, applications for the remining of historic tailings have increased,” she said.

“Gold Fields received a positive authorisation last week to remine 13 historic tailings dumps and deposit 750-million tailings within its centralised tailings storage facility.”First Uranium is remining 15 tailings dumps and establishing a super dump in the Klerksdorp area, within 1km of the Vaal River.

“Rand Uranium and Mintails have also applied for the remining of historic tailings dumps and the establishment of super dumps.” Radiometric surveys of previously reprocessed mine residue areas had, in some cases, shown elevated levels of residual radioactivity in the soils.

“The reprocessing activities could also result in the creation of two or more contaminated sites, where one previously existed,” Liefferink said. Solly Petra, the spokesperson for the department of mineral resources, said it could not answer questions about its research into the contamination of tailings dumps and its recommendations for remediation by the time the M&G went to print.