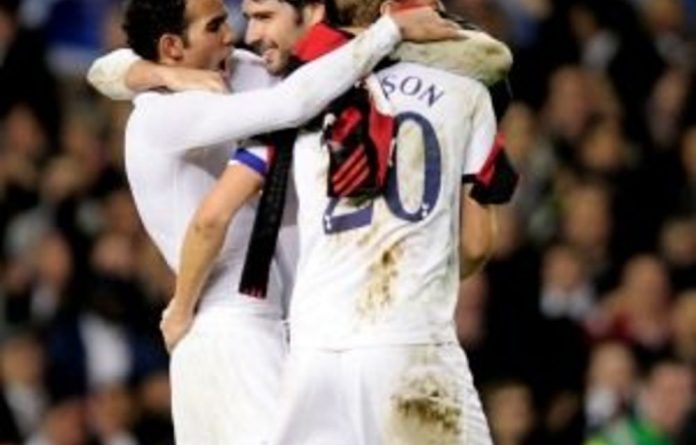 Tottenham survived a barrage of pressure from AC Milan to reach the Champions League quarter-finals as Wednesday’s 0-0 draw in the last 16 second leg at White Hart Lane secured a 1-0 aggregate victory.

Harry Redknapp’s side were under the cosh for long periods of a tense encounter, but Milan were unable to find a way past a Spurs defence superbly marshalled by William Gallas and Michael Dawson.

While Spurs were unable to recapture the flamboyant attacking play that dazzled earlier in the competition, their progress to the last eight more than made up for a slightly nervous display.

It was especially sweet because, while north London rivals Arsenal will spend the rest of the season watching the Champions League from their sofas after Tuesday’s exit against Barcelona, Spurs can still dream of a fairytale run to the final at Wembley.

Boos
Redknapp resisted the temptation to stifle Milan as he sent out an attacking line-up, with Dutch playmaker Rafael van der Vaart back after a calf injury.

Van der Vaart almost gave Spurs a dream start when he stabbed wide from the edge of the penalty area.

After his horrific foul on Vedran Corluka in the first leg, it was hardly surprising Milan’s former Arsenal midfielder Mathieu Flamini was subjected to constant boos on his return to north London.

But the raucous atmosphere was never likely to ruffle such an experienced team as Milan and Massimiliano Allegri’s side began to exert sustained pressure after Zlatan Ibrahimovic’s free-kick forced Heurelho Gomes into a sprawling save.

The Italian league leaders went even closer when Gomes was unable to stop Alexandre Pato after needlessly rushing off his line.

Pato squared to Robinho and his scuffed shot looped goalwards off Benoit Assou-Ekotto, only for a superb goal-line clearance from Gallas to spare Gomes’s blushes.

One more Italian scalp
Van der Vaart curled a free-kick just over the crossbar moments later, but it was Milan, looking far more dynamic than in the first leg, who continued to carry the greater threat.

Pato’s clever runs were causing problems for Spurs and the Brazil forward surged onto Ibrahimovic’s pass for a low shot that Gomes smothered.

After spending most of the first half on the back foot, Tottenham wasted an opportunity to take control immediately after the interval when Crouch completely mistimed his header from Aaron Lennon’s cross.

There was more menace about Spurs now and Flamini tried to stem the tide with a ferocious lunge on Assou-Ekotto that recalled his Corluka foul and earned a booking from referee Frank De Bleeckere.

Having survived that flurry of Spurs pressure, Milan went back on the attack and Robinho met Ignazio Abate’s pass with snap-shot that forced a scrambled clearance after Gomes’s block.

Redknapp responded by sending on Gareth Bale for van der Vaart and the Wales winger, just fit after a back injury, was immediately barged over by Flamini, who nonetheless escaped a red card.

Pato came desperately close to sending the tie into extra time when his shot whistled past Gomes’s near post in the closing minutes but Spurs, who beat Inter Milan in the group stage, had done enough to claim another Italian scalp. — Sapa-AFP