Aristide said to return to Haiti this week 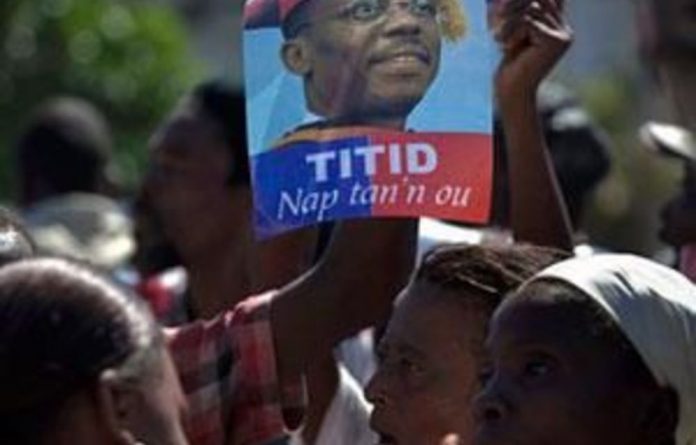 Ex-president Jean-Bertrand Aristide is due to end seven years in exile in South Africa and return to Haiti on Thursday, three days ahead of a presidential run-off election, a source told Agence France-Presse.

“Aristide is expected this Thursday in Port-au-Prince,” the source, close to the three-time former president, said on condition of anonymity.

November’s first-round election was marred by violence and fraud and the shattered country is still struggling to rebuild after a devastating earthquake 14 months ago that killed about 250 000 people.

Aristide was ousted from office twice, eventually fleeing a 2004 popular uprising aboard a US plane. He accused US diplomats of kidnapping him. Washington denies the charge.

But he remains a popular figure in certain quarters in Haiti, especially in the capital’s teeming slums, as well as in the tent cities that have sprung up since the January 2010 earthquake where many decry the slow pace of progress.

US should discuss Aristide with Haiti
Meanwhile, South Africa Deputy Minister of International Relations and Cooperation said South Africa is helping Aristide return to his homeland from exile in Pretoria, and any problems Washington has with that should be taken up with Haiti.

Marius Fransman told reporters on Tuesday that Aristide could return to Haiti in the next few days, or a week. A South African official last week said Aristide planned to return before a presidential run-off vote on Sunday.

US State Department spokesman Mark Toner acknowledged Aristide’s right to return from South Africa, but he said returning this week “can only be seen as a conscious choice to impact Haiti’s elections”.

Fransman said: “It is not our responsibility if America feels that he should only go in two weeks or three weeks or four weeks. They need to engage the Haitian government.”

Aristide has been saying for months that he wants to return to help his homeland recover from the January 2010 earthquake. The way was opened when Aristide’s diplomatic passport was delivered last month.– Sapa-AFP-AP