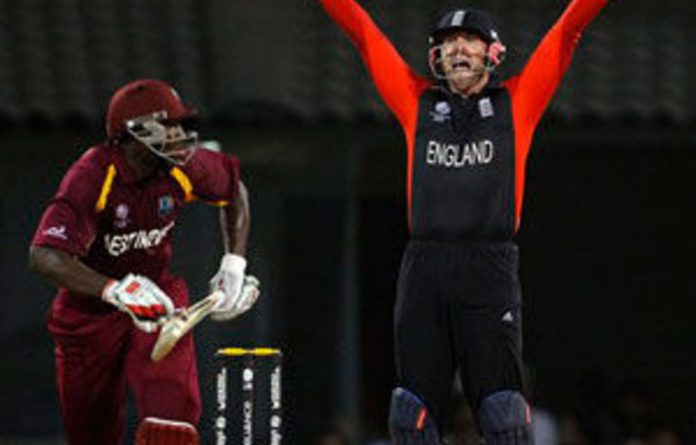 England kept themselves in the hunt for a quarterfinal place in the World Cup with a thrilling 18-run victory over West Indies in a Group B match on Thursday.

Defending a 243-run total on a wicket that offered plenty of runs, James Tredwell (4-48) wrecked the West Indies top order while Ravi Bopara claimed two vital wickets to bowl out the Caribbean side for 225 in 44.4 overs.

Chris Gayle (43) and Darren Sammy (41) made a whirlwind start but West Indies were unable to keep up the momentum as they lost regular wickets.

Earlier, the English top order was guilty of squandering promising starts and not a single batsman could score a half-century against a West Indies attack, spearheaded by pace bowler Andre Russell (4-49) and debutant leg-spinner Devendra Bishoo (3-34), which bowled them out for 243 in 48.4 overs.

Andrew Strauss (31) and Matt Prior (21) fell before their opening stand could really blossom and even though Jonathan Trott (47) and Luke Wright (44) down the order got the starts, none could hang on till the final overs to make it count.

England’s quarterfinal prospects now depend on the outcome of the other Group B matches. – Reuters