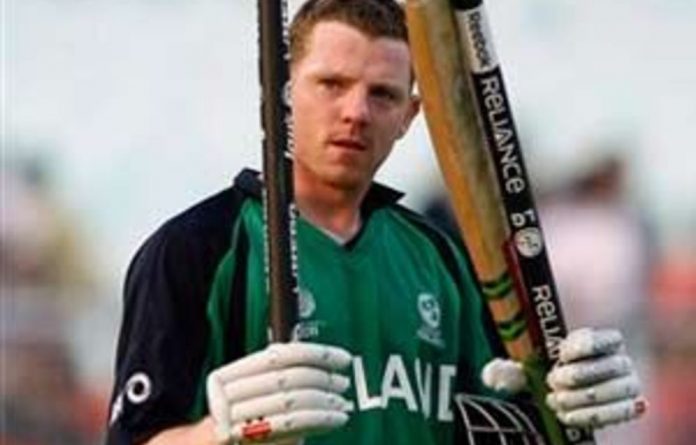 Paul Stirling smashed an explosive century as Ireland posted an emphatic six-wicket victory over the Netherlands in their last World Cup match on Tuesday.

The 20-year-old opener gave a superb exhibition of hitting, cracking two sixes and 14 fours in his 72-ball 101 as Ireland chased a stiff 307-run target with 14 balls to spare at Eden Gardens.

Stirling also upstaged the Netherlands’ Ryan ten Doeschate, who scored 106 for his second World Cup hundred. South African AB de Villiers and India’s Sachin Tendulkar are the only other batsmen to have made two centuries in this tournament.

Ireland and the Netherlands were already out of contention for a place in the quarter-finals, but Ireland had the satisfaction of posting two victories in the tournament while the Netherlands remained winless.

The Dutch recorded their highest total at the tournament but failed to keep pressure on the Irish openers William Porterfield (68) and Stirling, who delighted a few thousand spectators with an exciting exhibition of strokeplay.

Their 177-run stand was Ireland’s best for the first wicket in one-dayers, surpassing the 118 between the same pair against Bangladesh in Belfast last year.

Man-of-the-match Stirling was more aggressive than skipper Porterfield, racing to his half-century off just 25 balls and then taking 45 more deliveries to complete his second one-day hundred.

The Dutch had to wait until the 27th over to break the stand when off-spinner Tom Cooper had Porterfield caught behind.

Chipped in
Stirling fell in the next over, caught by Alexei Kervezee at deep mid-wicket off left-arm spinner Pieter Seelaar.

All the other batsmen chipped in, with Niall O’Brien hitting 57 not out, Ed Joyce scoring 27 and Gary Wilson 27. Kevin O’Brien finished on 15 not out.

Earlier, the Dutch were struggling at 53-3 after being put in to bat, but ten Doeschate came to his team’s rescue with his third one-day hundred. He hit one six and 13 fours in his 108-ball knock.

Four batsmen were run out off successive balls in the last over, but the Netherlands had crossed the 300-mark at that stage, thanks to ten Doeschate, skipper Peter Borren (84) and opener Wesley Barresi (44).

Ten Doeschate, who made 119 against England, put on 121 runs for the fifth wicket with Borren.

Ten Doeschate was also involved in another useful stand, putting on 60 for the fourth wicket with Barresi, who played some handsome shots during his brisk knock after overcoming a painful blow to the head.

Barresi, who retired in the second over after being hit on the back of his head by a throw, returned to bat after the fall of the third wicket.

Ireland, the most impressive of the non-Test-playing nations at the World Cup, were a bowler short when left-arm spinner George Dockrell dislocated his right shoulder while fielding off his own bowling in his fourth over.

The spinner went to hospital for a check-up and did not take any further part in the match. — Sapa-AFP