‘People are the real wealth of nations’ 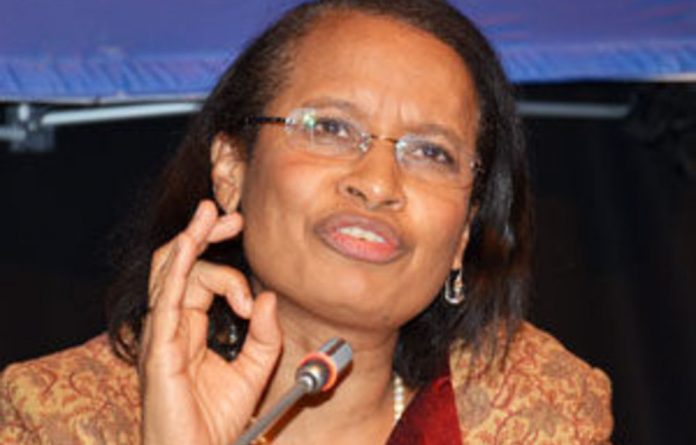 Geraldine Fraser-Moleketi is the United Nations Development Programme (UNDP) director for democratic governance and a former South African minister of public service and administration. She spoke to the Mail & Guardian about democratisation processes in Africa.

More than a dozen African countries are holding crucial elections this year. What are the biggest challenges facing governance on the continent?
The UNDP promotes elections because democratic governance, of which elections are a fundamental component, promotes human development and in turn reduces human poverty.

People are the real wealth of nations. Development is thus about expanding the choices people have to lead lives that they value. And it is thus about much more than economic growth, which is only a means — if a very important one — of enlarging people’s choices.

In responding to the challenges of the African continent, I will refer to those identified by former president of Tanzania Benjamin Mkapa and Chief Emeka Anyaoku, former secretary general of the Commonwealth Secretariat.

In the words of Mkapa, in 2002, on the priorities for Africa: “The first priority should be human development, and empowerment for self-development — within nations and internationally. It has to be the war on human poverty. It is the kind of democratic governance that does not feed people empty ideas, but empowers them to feed on real food, to enjoy good health, to educate their children, and to give women a fair chance.

“Africa needs better governance nationally, and rightly demands better governance globally. We need national and global governance that is focused on poverty; that has vision of a humane world community; that correctly sets priorities and strategies; that promotes justice and participation, stability and predictability, as well as law and order. It has to be governance that touches in a positive way the lives of ordinary people, making it possible for them to have a fair chance to self-develop without having to perpetually depend on the benevolence of outsiders.”

Important, in addition is a point made by Anyaoku, addressing the Commonwealth Parliamentary Association in Banff, Canada, on October 8 1994: “The absence of a democratic culture can lead to what Arthur Lewis called ‘winner takes all’ politics, or what John Stuart Mill described more graphically as ‘the tyranny of the majority’, with the victors interpreting triumph at the hustings as licence to hijack the institutions of democracy — such as the media, the civil service, the electoral commission and the judiciary. Such an eventuality, which can be compounded by the absence of dialogue between political opponents, can have a paralytic effect on the functioning of democratic government.

“By the same token, there is sometimes the temptation for losing parties to repudiate the overall verdict of the people and withdraw from the difficult but necessary task of contributing to the process of governance. The fact is that parliamentary democracy needs alert and active oppositions as much as it does enlightened and responsible governments.”

The world has been captured by the political uprisings in North Africa. What lessons do you think the uprisings have for Southern Africa?
A number of lessons: underlying the rising tide of transformative changes in the Arab region are critical development failures, especially the deficits in governance, freedoms and social justice and, in particular their nexus with poverty, unemployment and inequality — in essence failures in protecting human dignity.

The people of the Arab states/North Africa, and the youth in particular, are very clearly making a call for freedom, human dignity, for voice and inclusion. Tunisia, for example, has achieved sustained economic growth since 1969. However, we saw that the current generation of youth was as restricted by the lack of opportunities for upward social mobility and decent work as by assaults on human dignity and lack of freedoms. The presence of women in this popular movement pointed to the inclusive nature and role of the movement in breaking down gender barriers, as well as class, income and other social barriers.

I was in Tunisia in February two weeks after the “revolution”. I met, among, others the General Workers’ Union, which plays a key role as “king-maker”, as well as playing a role to ensure the integrity of the transition. In essence, people are saying, “We also want to shape our democracy, we want freedoms, we want a voice in society!”

You served as a Cabinet minister for nearly 10 years in South Africa. How are we faring when it comes to democracy that is transparent — and accountable?
A few issues on that one. I think firstly as a country we have the basis for a solid democracy — a sound Constitution with a strong Bill of Rights; a Constitution that is a product of a constituent assembly that went through a rigorous and inclusive process involving the peoples of South Africa.

We also have constitutional bodies that hold the state and society accountable, such as the Human Rights Commission, the Public Protector and other Chapter Nine institutions. We have the mechanisms to ensure accountability and the citizens should take recourse to these mechanisms.

And then we have a strong, robust media. Media have a responsibility to keep the public informed and have a key role in contributing to transparency.

Can we do better? Of course, it is important to always aspire to do better. We attained our democracy after a very long struggle. Therefore South Africans should never become complacent and never cease to endeavour to do more.

There has been a persistent trend of homophobia on the continent, with African politicians often staying mum on this issue. Late last year, Arab and African countries — including South Africa — succeeded in removing a reference to sexual orientation from a UN resolution that calls for the condemnation of unjustified killings globally. It was later restored. What is the UN’s take on homophobia in Africa, which is often institutionalised?
Until the passage of the stated UN resolution, we draw on the Universal Declaration of Human Rights, which states in Article 1 that: “All human beings are born free and equal in dignity and rights. They are endowed with reason and conscience and should act towards one another in a spirit of brotherhood.”

The Human Rights Committee also looks at the issue from the perspective of right to privacy, which is contained in article 17 of the International Covenant on Civil and Political Rights.

What insights can you share from the recent Electoral Cycle Support you attended in Gaborone, Botswana?
Elections remain the most direct means through which people express their political preferences and choose their representatives, and it is a powerful democratic governance tool of voice, accountability and finally human development. There is a deep acknowledgement that elections alone are not sufficient for democratic governance and should always be supported in a broader democratic context.

There was a clear call that we should get the mechanisms right internally and resolve what was referred to as the “cultural divide between peacekeeping and development”, both of which have a mandate on electoral assistance. It also focused on sustainability and efficiency of the process as well as the cost; the use of new technologies; youth and women; and regional work and inter-regional work.

You have been in your present role at the UNDP for a while now. Has this new global experience and perspective given you any fresh insight into South Africa’s challenges and potential, and if so, what?
This is the beginning of my third year with the UNDP. We serve 132 countries worldwide looking at, among others, areas related to inclusive governance, encouraging women participation, building responsive institutions, supporting parliaments, as well as free and fair media, ensuring that legal systems work for all, and encouraging the mainstreaming of human rights principles.

We support elections, somewhere in the world, every three weeks and over the past few years we have moved away from only supporting elections as events, to supporting the electoral cycle (which is a new approach geared towards policy development, knowledge management and programme support that employs a sustainable institution- and process-driven approach to electoral assistance). In addition, we assist one out of every three parliaments.

In South Africa, as minister of public service and administration, I was involved in a number of these or related matters at a national, as well as regional level as chair of the African Ministers of Public or Civil Service. I trust I brought some of the rich experience of the South African transition and building of a democracy to the UNDP. In turn I have been exposed to huge global challenges as well as diverse regional experiences.

There are a number of rich experiences from South Africa that can be shared, ranging from our specific approaches to governance, to the vibrancy of our civil society movement (including the robust trade union movement) and the Truth and Reconciliation Commission, as well as our inclusive constitution-making process.

The final part of Zamansele Nsele’s interview with Frank B Wilderson expands on some of the thinking in his latest book, ‘Afropessimism’
Read more
National