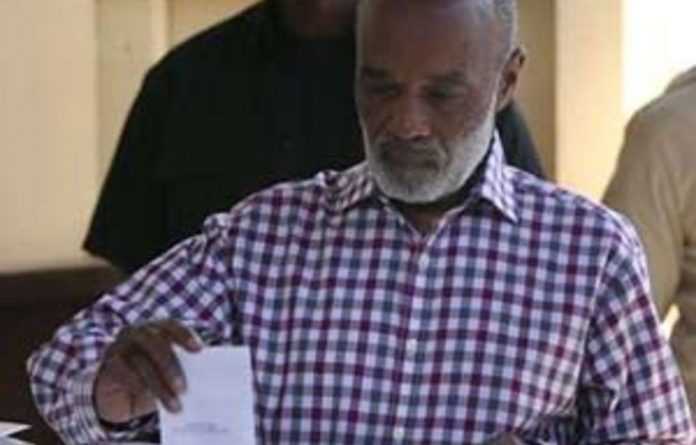 Tally sheets read out on television and radio indicated that in key urban areas such as Petionville in the capital and the sprawling Cité Soleil slum, Martelly was well ahead of his rival, former first lady Mirlande Manigat.

“I think he has won the election. From everything that I’ve heard it looks like it may even be a landslide, at least in the urban areas,” United States-based Haiti expert Robert Fatton told Agence France-Presse (AFP).

Fears that Sunday’s polls, delayed for months by bickering over a violence-plagued first round in November, would be overshadowed by the return from exile in South Africa of charismatic ex-president Jean-Bertrand Aristide proved unfounded.

Aristide endorsed neither candidate and did little to interfere with the delicate political situation in a Caribbean nation whose recent past has been scarred by dictatorship and upheaval.

Authorities said two people had been killed in election-related violence, but in most parts of Haiti voted went ahead calmly.

The European Union and the United Nations, which deploys thousands of peacekeepers in the notoriously troubled Caribbean nation — more than 220 000 people were killed in a January 2010 earthquake — offered praise.

UN Secretary-General Ban Ki-moon said the primary task of the new leader would be “to oversee the reconstruction of the country after the tremendous tragedies that have befallen it in the past year”.

Stir up trouble
The US was more cautious, pointing to encouraging signs, while France described the polls as “satisfactory” but urged candidates not to stir up trouble by prejudging the final result.

They “should respect this democratic process by abstaining from any unilateral proclamation based on partial results”, a spokesperson for French Foreign Minister Alain Juppe told reporters in Paris.

Known to fans by his stage name “Sweet Micky”, the 50-year-old Martelly waged a slick campaign built on promises to dramatically shake up Haiti’s elitist politics and drag the masses out of poverty.

The candidates are vying for the job of rebuilding a nation beset by problems, from endemic corruption and the aftermath of the 2010 quake to a cholera epidemic that has claimed almost 5 000 lives since mid-October.

Pre-election opinion polls showed Martelly enjoying a slim lead over the soft-spoken Manigat, a 70-year-old academic and opposition figure whose husband was president in 1988 for a few months before being ousted by a coup.

Voting problems were minor compared to November when polling stations were trashed and the whole process deteriorated into a farce when most of the candidates called for a re-run even before the polls had closed.

At least five people were killed in December when days of rioting erupted at the news that Martelly had finished third behind ruling party candidate Jude Celestin and would not make the run-off.

After weeks of US-led pressure and a review by international monitors, Martelly was eventually reinstated at the expense of Celestin, who was seen as current President René Préval’s handpicked successor.

French sociologist Laenec Hurbon agreed with Fatton that any Martelly victory was more likely due to the perception of him as the change candidate than because people necessarily backed his right-leaning politics.

“If Martelly does it, it’s by default,” Hurbon, from the French National Center for Scientific Research, told AFP. “It’s a vote against Préval, against continuity. People are sick of a government seen as devoid of energy and lacking any ideas.”

Colin Granderson of regional bloc Caricom, heading an international observer mission, said turnout had been slightly higher than in the first round when only 23% of the 4,7-million eligible Haitians cast ballots.

Voting on Sunday at a school in the upscale neighbourhood of Petionville, Martelly told a crowd of several hundred cheering supporters: “Today is the day of change, change for Haiti. The day when Haiti will escape its misery.”

The international community is watching closely as it has committed billions of dollars to help reconstruct Haiti, where hundreds of thousands of quake survivors eke out an existence in squalid camps. — Sapa-AFP