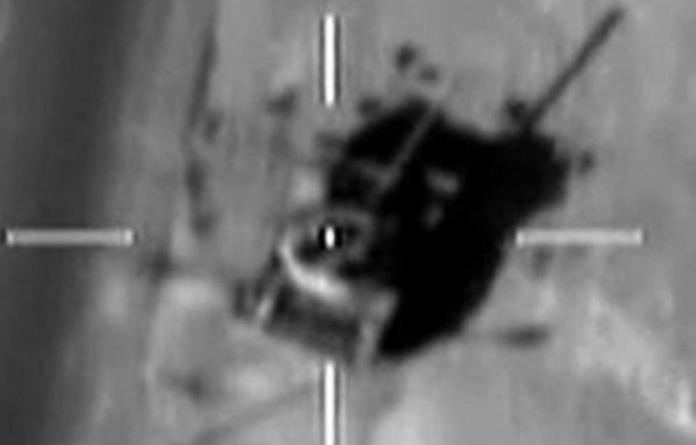 Rebels said they had entered Ajdabiyah from the east on Friday, Al-Jazeera reported, while Gaddafi’s forces held on in the west of the town, which commands the coastal road towards Tripoli. The African Union said it was planning to facilitate talks to help end the war, but Nato said its operation could last three months, and France said the conflict would not end soon.

In Washington, a US military spokesperson said the coalition fired 16 Tomahawk cruise missiles and flew 153 air sorties in the past 24 hours targeting Gaddafi’s artillery, mechanised forces and command and control infrastructure.

Western governments hope the raids, launched a week ago with the aim of protecting civilians, will shift the balance of power in favour of the Arab world’s most violent popular revolt.

In Tripoli, explosions were heard early on Saturday, signalling possible new strikes by warplanes or missiles.

As the United States said Gaddafi’s ability to command and sustain his forces was diminishing, Libyan state TV said the “brother leader” had promoted all members of his armed forces and police “for their heroic and courageous fight against the crusader, colonialist assault”, without giving further details.

Opposition forces on the road there seemed more organised than in recent days, when their disarray stirred doubts about their ability to challenge Gaddafi.

They had set up road blocks at regular intervals and Reuters counted at least four truck-based rocket launchers — heavier weaponry than had been seen earlier this week.

Winning back Ajdabiyah would be the biggest victory for the eastern rebels since Western military intervention halted a counter-offensive by the better equipped Gaddafi forces which had driven them back towards the rebel stronghold of Benghazi.

It would also signal that allied airstrikes may be capable of helping rebel fighters to eventually topple Gaddafi.

African initiative
At African Union headquarters in Addis Ababa, AU commission chairperson Jean Ping said the organisation was planning to facilitate peace talks in a process that should end with democratic elections.

It was the first statement by the AU, which had rejected any form of foreign intervention in the Libya crisis, since the UN Security Council imposed a no-fly zone last week and air strikes began on Libyan military targets.

But in Brussels, a Nato official said planning for Nato’s operation assumed a mission lasting 90 days, although this could be extended or shortened as required.

France said the mission could go on for weeks.

“I doubt that it will be days,” Admiral Edouard Guillaud, the head of French armed forces, told France Info radio. “I think it will be weeks. I hope it will not take months.”

Guillaud said a French plane destroyed an army artillery battery near Ajdabiyah, while in London, the Defence Ministry said British Tornado aircraft had also been active there.

A Reuters correspondent who travelled close to Ajdabiyah on Friday saw large plumes of black smoke rising above the eastern entrance to the town.

A rocket apparently fired from rebel positions then hit the eastern gate, sending a fireball into the sky. “The eastern gate has fallen and we are sending a team to check before moving forward,” rebel Colonel Hamad al-Hasi told Reuters.

“[The strikes] will weaken their forces and more importantly their morale,” he said, adding the level of Western strikes was “sufficient. We feel safe under their protection”.

Simon Brooks, head of the International Committee of the Red Cross operations in eastern Libya, reported big population movements from the Ajdabiyah area because of the fighting.

Officials and rebels said aid organisations were able to deliver some supplies to the western city of Misrata but were concerned because of government snipers in the city centre.

Gaddafi’s forces shelled an area on the outskirts of the city, killing six people including three children, a rebel said.

Misrata has experienced some of the heaviest fighting between rebels and Gaddafi’s forces since an uprising began on February 16. – Reuters