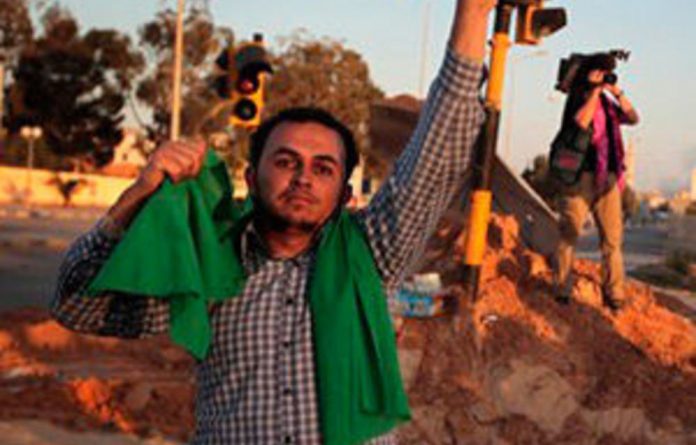 Efforts appear to be under way to offer Muammar Gaddafi a way of escape from Libya, with Italy saying it is trying to organise an African haven for him, and the US signalling it will not try to stop the dictator from fleeing.

The move came as diplomatic and military pressure on Gaddafi mounts as Britain tries to assemble a global consensus demanding he surrender power while intensifying air strikes against his forces.

Britain will be hosting an international conference including the UN, Arab states, the African Union, and more than 40 foreign ministers, focused on coordinating assistance in the face of a possible humanitarian disaster, and building a unified international front in condemnation of the Gaddafi regime and in support of a Nato-led military action in Libya.

On the eve of the London conference, Italy offered to broker a ceasefire deal in Libya, involving asylum for Gaddafi in an African country. “Gaddafi must understand that it would be an act of courage to say: ‘I understand that I have to go’,” said the Italian foreign minister, Franco Frattini. “We hope that the African Union can find a valid proposal.”

A senior American official signalled that a solution in which Gaddafi flee to a country beyond the reach of the International Criminal Court (ICC), which is investigating war crimes charges against him, would be acceptable to Washington, pointing out that Barack Obama had repeatedly called on Gaddafi to leave.

“I can’t say I know of active efforts to find him a place to go, but I would not say it has been ruled out,” the official said. “The ICC has said it will ready to pursue the case, but there are also the rules of the ICC,” he added, pointing out that some countries do not recognise the court’s jurisdiction.

British officials said they would rather see Gaddafi face trial, but if his escape was the price of a peaceful settlement they would be able to live with that.

David Cameron and Nicolas Sarkozy tried to ratchet up the pressure on Gaddafi, issuing a joint statement on the eve of the conference declaring his era over, and indicating that his lieutenants might escape prosecution if they abandoned him immediately. “We call on all his followers to leave him before it is too late,” they said.

Nato takes over
Nato officially announced it was taking over control of the air strikes campaign on Sunday, but the handover of command from the US will not happen for a few days, alliance officials said. Meanwhile, with Gaddafi forces and rebels squared for a battle around Gaddafi’s birthplace of Sirte, British planes taking part in the coalition that has been conducting the campaign for the past 10 days, stepped up their bombardment.

RAF Tornados hit 22 tanks, armoured vehicles and artillery pieces over the weekend, the Ministry of Defence said. In the early hours of Monday, they struck ammunition bunkers near Subha in southern Libya, according to the Major General John Lorimer, the MoD’s chief military spokesperson.

This is significantly more weapons than the Tornados fired over the first week of air strikes. Defence officials say the higher tempo is the result of more intelligence surveillance and assessments from reconnaissance aircraft. But British defence officials made clear they expect more restrictive targeting rules when their planes come under the command of a Canadian Nato general, Charles Bouchard, possibly by Thursday. Bouchard said that the transition would take a few days and it is a complex operation.

Discord over the air strikes threatens to undermine the consensus the UK will attempt to construct at the Lancaster House conference. Russia denounced the air campaign, arguing it violated UN Security Council resolution 1973, passed earlier this month, which permitted “all necessary measures” to be used to protect civilians.

The Russian foreign minister, Sergei Lavrov, said: “We consider that intervention by the coalition in what is essentially an internal civil war is not sanctioned by the UN security council resolution.”

Turkey’s prime minister, Recep Tayyip Erdogan, was also critical of the air campaign in a Guardian interview on Monday, and in a symbolic blow to the London conference, it emerged that Amr Moussa, the secretary general of the Arab League — whose support for military action was deemed crucial by Washington and its allies — would not be attending, sending a deputy instead.

The joint statement issued by Cameron and the French president was intended in part to heal a rift which opened up in recent days between the countries over the command of the air campaign and France’s recognition of the Benghazi-based National Libyan Council. The rebels are not invited to the conference, but William Hague is expected to meet one of their leaders, Mahmoud Jibril. – guardian.co.uk