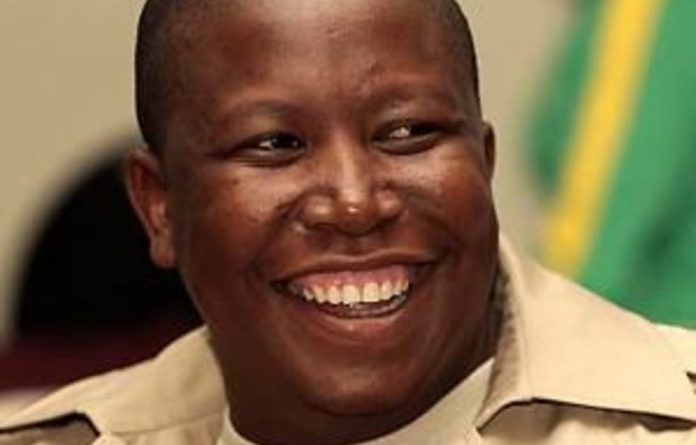 The ANC Youth League on Friday welcomed a front-page apology by the Daily Sun newspaper for misquoting its leader Julius Malema, and called for an investigation into how the story went wrong.

“The African National Congress Youth League is pleased that finally the Daily Sun has acceded to our demand and instruction that they render a front-page apology and retraction of the story,” spokesperson Floyd Shivambu said in a statement.

“The ANC Youth League believes that someone in the AENS [African Eye News Service] or the Star newspaper seems to have created and inserted the quotations on the story and these newspapers should expose and take action against those who did so.

“Only an open forensic investigation will expose who the real culprits are,” said Shivambu.

The Daily Sun became the second newspaper on Friday to apologise to Malema.

“The fact that it turned out to be wrong is a matter of great regret to us,” said publisher Deon du Plessis, in an apology headlined, “Sun Says: We’re sorry!”

“It was an honest mistake. But we take this first opportunity to apologise to President [Jacob] Zuma, Julius Malema and the ANC Youth League for any embarrassment that our story may have caused.”

“… we will take the necessary legal action, not through the Ombudsman, but through formal judicial processes, because the Press Ombudsman is useless,” Shivambu had said.

The ANC and the league have harshly criticised the newspapers, demanding to know what went wrong and repeating their arguments that the Press Ombudsman could not offer strong enough punitive measures for such mistakes.

On Thursday, the Daily Sun published a story quoting the youth league as saying Malema was misquoted, but did not offer an apology then.

The Star newspaper apologised on Thursday, saying: “We quoted Malema as saying: ‘Since he got into power, comrade Zuma has been surrounded by bad advisers’.

“We have been able to verify that Malema … had not referred to President Jacob Zuma.

“The Star regrets the error and unreservedly apologises to Malema for whatever embarrassment it caused.”

Both the Star and the Daily Sun blamed AENS, who supplied the story, while AENS editor Sharon Hammond blamed the journalist Matome Sebelemetja, saying he had initially said he had notes of Malema’s comments, but failed to produce the notes.

Sebelemetja, however, has said his original report did not contain the contentious quote. Hammond said it was later dictated to sub-editors over the phone.

Press Council chairperson Raymond Louw on Friday criticised the ANC and its league for attacking the council over a matter it had nothing to do with.

“The Press Council of South Africa is concerned over the manner in which the African National Congress and its Youth League have dragged its self-regulatory ombudsman system into an issue over newspaper errors that did not involve the ombudsman and its processes,” Louw said in a statement.

“Indeed, what occurred between the papers and the ANC was totally outside the mandate of the Press Council and the ombudsman system.”

The ruling party has called for a Media Appeals Tribunal for the print media.

Louw said regarded the criticism by the ANC and ANCYL was “clearly an attempt by the ANC to gain acceptance for its proposal that parliament should establish a statutory Media Appeals Tribunal”.

The Star said on Thursday the ANC “must feel free to lodge a complaint with the Press Ombudsman, with whom we would co-operate”.

“As to what really happened, and how the misquote in the report came about, we ourselves would like to know,” the Star said.

If the report were true it could have landed Malema in serious trouble with the ruling party.

Last May, Malema had to make a public apology to Zuma after criticising him in public.

An ANC disciplinary committee warned him that, should he be found guilty of contravening rule 25.5 (i) of the ANC constitution within the next two years, his membership would be summarily suspended. — Sapa